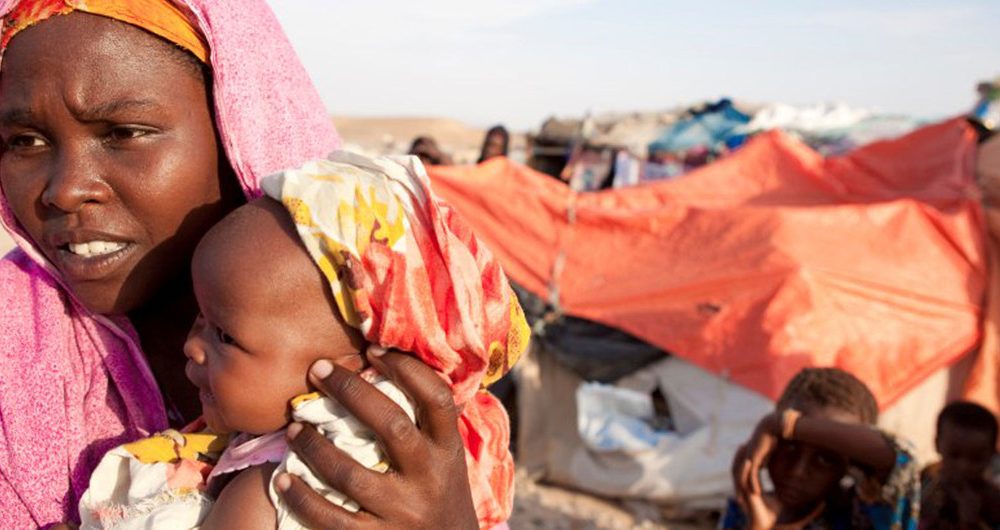 Women bear the brunt of the climate crisis, COP26 highlights

Women took the global stage on Tuesday to show that climate change isn’t gender neutral, and that climate action needs them: investing in women and girls creates ripple effects felt throughout entire communities and the frontline knowledge they possess is needed now more than ever, especially as new analysis has revealed that the announcements by world leaders at COP26 still leave our planet on the path to catastrophic global warming.

After ‘walking’ some 8,000 miles across Europe, Little Amal, a giant puppet representing a young Syrian refugee girl, arrived in Glasgow right on time for ‘Women’s Day’ at COP26.

The 3.5-metre-tall living artwork surprised attendants atTuesday’s plenary when it walked up the stairs and joined Samoan climate activist Brianna Fruean for a hug and a gift exchange.

Brianna gave her a flower, representing hope and light, and Amal, a bag of seeds in return.

“Both of us have embarked here for a journey, from two very different places, but we are connected by the fact that we are living in a broken world that systemically has marginalized women and girls. Especially women and girls from vulnerable communities,” Ms. Fruean told the plenary.

The young activist reminded participants that the brunt of the climate emergency which amplifies existent inequalities is often felt harder by women.

“Amal brought seeds to physically share, to inspire, seeds represent hope. The beautiful thing about seeds is that you have to be selfless enough to be content in the fact that you might not eat the fruit or bear the flowers but feel it was worth it knowing that your children will live with its beauty,” she added, using seeds as a metaphor for the decisions being taken at COP26 for the future of our planet.

Ms. Fruean highlighted that seeds need to be watered, pruned and nurtured to bear fruit and flowers, inviting delegates to keep up their work after the conference finishes.

“I will plant these seeds out when our ministers are ready, but I hope that within the negotiations and rooms you are able to plant them and when we leave COP, you’ll tend to them so that they’ll grow into a beautiful world that is deserving of girls like Amal and deserving of having all girls be safe in it.”

The relationship between women’s equality and the climate crisis

Alok Sharma, the COP26 President, made a short intervention, but not without being observed by Little Amal and Ms. Fruean, who stood tall watching his speech.

“Today is gender day because gender and climate are profoundly intertwined. The impact of climate change [affects] women and girls disproportionately,” he said, urging to empower and support women.

Little Amal, and the Syrian girls it represents, are not alone in their distress: 80 per cent of the displaced by climate related disasters and changes around the world are women and girls.

For millennia, women have had a special relationship with nature. They contribute enormously to the well-being and sustainable development of their communities, as well as to the maintenance of the planet’s ecosystems, biological diversity and natural resources.

Women in developing countries are generally the first to respond to managing the environmental capital that surrounds them. From collecting water for cooking and cleaning, using the land for livestock, foraging for food in rivers and reefs, and collecting firewood, women all over the planet use and interact with natural resources and ecosystems daily.

According to the United Nations Development Programme (UNDP) and other UN agencies, they are also the first to feel the effects of climate change when they are forced to travel longer and longer distances to find what they need to feed their families.

Moreover, while environmental degradation has serious consequences for all human beings, it affects, in particular, the most vulnerable sectors of society, mainly women, whose health is most fragile during pregnancy and motherhood.

However, the recognition of what women contribute, or can contribute, to the survival of the planet and to development remains limited. Gender inequality and social exclusion continue to increase the negative effects of unsustainable and destructive environmental management on women and girls.

Persistent discriminatory social and cultural norms, such as unequal access to land, water, and other resources, as well as their lack of participation in decisions regarding planning and management of nature, often lead to ignorance of the tremendous contributions they can make.

It is a matter of ‘justice’

“Addressing the rapidly changing climate is a matter of justice and equality with the most vulnerable and most affected including indigenous communities, less developed countries and our focus today and every day: women”, US House Speaker Nancy Pelosi told COP26 delegates at the next plenary panel.

Ms. Pelosi noted that she had brought the largest US congressional delegation to date to a COP and announced that by the end of the year, Congress planned to pass legislation to double international climate finance.

“Build back better with women,” she added, giving a shout-out to the female members of her delegation.

One of them was Representative Alexandra Ocasio Cortez, known for being the youngest woman to serve in the US Congress and for being vocal and active about climate action and legislation.

From South America to the Artic, climate change is affecting women

Immaculata Casimero, an Indigenous activist from the Wapichan nation in Guyana, knows that better than anyone, and that is why she works at empowering women within her community.

“We hold training sessions because we would like to see more women in leadership. At the community level most of the time there are only men. It’s patriarchy, and that’s something that needs to be broken. We can lead better than men, we lead in our households, we nurture children. The whole of humanity exists because of us”, she said during an interview with UN News.

Ms. Casimero also highlighted that indigenous women, as conveyors of traditional knowledge to the new generations, have an extremely important role in combating climate change.

The crisis is already affecting her home community, which this year lost several hectares of crops of Cassava, their main source of income, due to heavy and unexpected rainfall. The situation also led to food insecurity.

On the other side of the world, the Sami People, an indigenous Finno-Ugric-speaking people inhabiting the region of Sápmi, which today encompasses large northern parts of Norway, Sweden, Finland, are also feeling the climate crisis firsthand.

“Climate change in the Arctic is happening very fast. The weather is changing and is very unstable, our winters are unstable, the ice doesn’t freeze when it is supposed to. All our traditional knowledge of how to manage the landscape is also changing”, young activist Maja Kristine Jama described speaking from the Indigenous Pavilion at COP26.

Her friend, Elle Ravdna Nakkakajarvi, had some words to world leaders attending the conference:

“Actually listen to us; don’t just say that you’re going to listen. Don’t make empty promises because we are the ones feeling climate change in our bodies, and we have knowledge about the lands and waters in our areas and we can come up with solutions. We deserved to be listened to.”

Science says we are still not doing enough

Today is also ‘Science Day’ at COP26, and fittingly, the UN Environmental Programme, UNEP, delivered an actualization of their latest Emissions Gap Report taking in account the latest pledges made since the beginning of the conference.

“We are not doing enough, we are not where we need to be and we need to step up with much more action and urgency and much more ambition…there is also a leadership gap that we need to see narrow before the gavel comes down (at COP26)”, emphasized UNEP’s Executive Director Inger Andersen.

The report had originally revealed that with the current National Determined Contributions (NDCs) and pledges, the world was on its way to reducing around 7.8 per cent of annual greenhouse emissions in 2030, a big gap between the 55 per cent needed to curb global warming to 1.5C.

“At this point when we look at what we have come out of the pledges, frankly, is an elephant giving birth to a mouse. We need to think about whether that is good enough or whether we can stretch more”, she said, informing that including the updated NDCs and pledges, the world only will be shaving 8 per cent of emissions by the end of the decade.

“It is really good to see countries taking this up and the conversation didn’t exist to this extent in Paris, and we appreciate and salute this, but it is not good to see that the pledges are generally vague, they are untransparent, some deal with greenhouse gases others with only carbon… they are hard to calculate and hold accountable. And of course, many of them kick the can beyond 2030,” Ms. Andersen added.