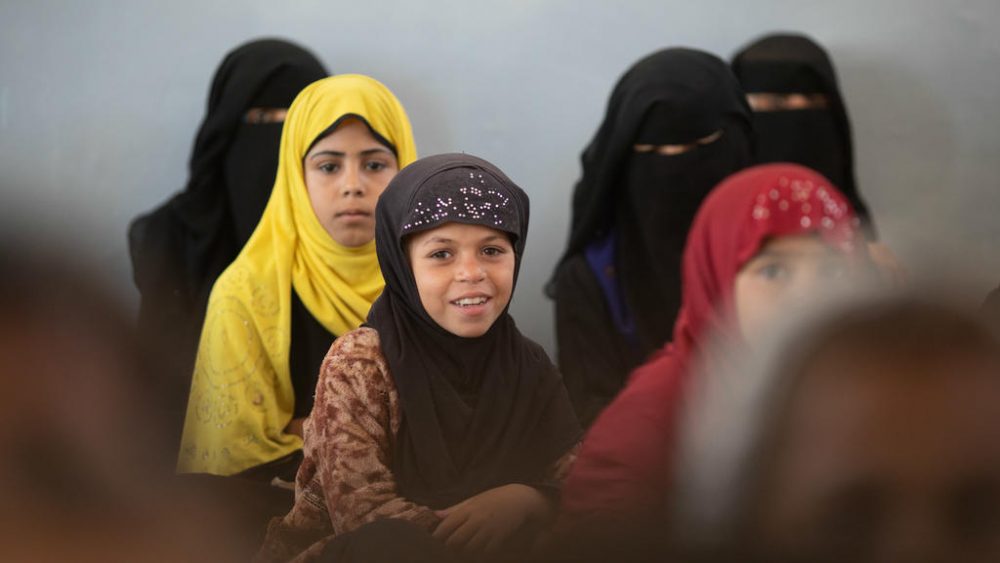 Life and death for Yemen’s women and girls, as funding evaporates

In mid-May, just as the COVID-19 pandemic arrived in Yemen, funding for UNFPA’s life-saving reproductive health services dried up. The agency has been forced to suspend the provision of reproductive healthcare in 140 out of the 180 health facilities, it supports, meaning only 40 now remain.

There have already been tragic consequences.

Mariam, a war widow with four daughters, had been receiving antenatal care at the UNFPA-supported BaniShamakh health centre – the only health centre in the district. But when she arrived with heavy bleeding last week, she found that maternal services had ceased, and the doctor had left. Mariam subsequently haemorrhaged to death.

In another incident, a woman named Zainab died of post-partum bleeding after delivering a daughter, Safiya. The hospital she was planning to use, had lost its gynaecologist due to the funding shortage, leaving Zainab to give birth at home, without help when complications arose.

‘Now we are powerless’

Current and former health facility staff say they are heartbroken.

“The most painful part is that now we are powerless and we cannot do anything about it”, said Adel Shuja’a, a nurse at the BaniShamakh centre. He says all the maternal care – from iron and folic acid supplements to management of obstetric emergencies – has stopped. “We are in this poor community that is exhausted from war. The suffering of poor families has increased, and we may lose many of our mothers and children.”

“What stuck with me most was a man whose eyes filled with tears when he learned that free services were not available”, said a nurse from the key Red Sea port of Hudaydah, who broke the news to several pregnant women that no midwives were available. “He returned to his home with his pregnant wife… I felt so helpless that day.”

UNFPA is the sole provider of life-saving reproductive health medicines and supplies in Yemen, which has seen its health system all but collapse under five grinding years of conflict for control, between a pro-Government Saudi led coalition, and Houthi rebel forces, who hold the capital.

Last year, UNFPA reached more than 3.5 million women and girls with reproductive health and protection services, providing support to 260 health facilities and 3,800 reproductive health workers. But as funding has run out, these programmes have been scaled back or shut down.

At the beginning of 2020, UNFPA appealed for $100.5 million for its humanitarian response in Yemen; to date, only 41 percent of that has been mobilized. An additional $24 million is needed for the COVID-19 response.

90 per cent will close

If no funding materializes by July, UNFPA will be forced to close up to 90 per cent of its life-saving reproductive services across the country.

The funding had been a game-changer, said one midwife from Al Shahel Rural Hospital. “We were able to have reproductive health medicines, a midwife and a female doctor. The health facility never had a midwife or a female doctor before. It was a big turning point for our village”, she described. “We were serving more than 23,000 people, but unfortunately the support has now stopped.”

The hospital had received up to 120 cases per day, she said. “But now, after suspending the services, we are unable to provide the most basic treatment.”

The long-term costs could be staggering: It is estimated that two million women and girls of childbearing age could be at risk due to the loss of reproductive services. Some 48,000 women could die from complications of pregnancy and childbirth.

Reproductive health services are winding down just as Yemen begins to grapple with the COVID-19 pandemic. The country has so far recorded 282 cases of the disease.

“We still continue providing services, even with a lack of face masks and gloves,” said Dr. Eshraq Al-Amrani, a former general physician at Al Shahel Rural Hospital. “I cannot lie that I am very worried.”

“We do not have the minimum means of personal protection,” said Nurse Shuja’a.

UNFPA has been working to provide personal protective equipment and essential medical supplies to Yemen’s health system, so far reaching 114 health facilities. Some 40 ventilators have been provided.

But more funding is needed.

“We are now in a life-or-death situation. Women and girls will die if we do not provide critical reproductive health services. We can only do so if funding becomes available”, said Nestor Owomuhangi, UNFPA’s acting representative in Yemen.

A virtual pledging conference, co-hosted by the Kingdom of Saudi Arabia and the United Nations, is taking place on 2 June.