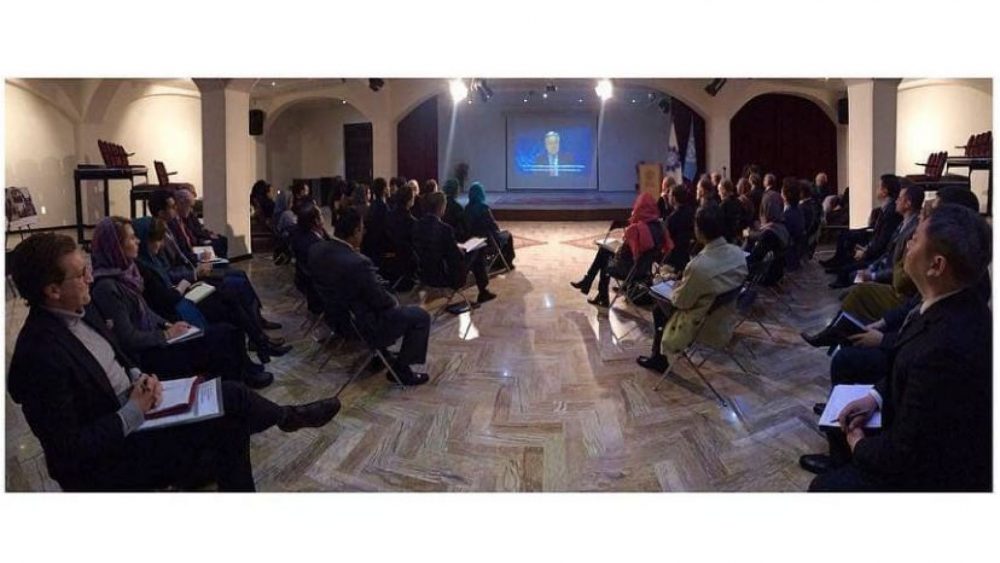 Briefing on UN Development System reform for the international community

UN Resident Coordinator in the Islamic Republic of Iran Ms. Ugochi Daniels and Heads of UN Agencies, Funds and Programmes in the Iran briefed the members of the international community on the Repositioning of the UN Development System (UNDS) globally and in the context of Iran. The event which was co-hosted by ECO Cultural Institute took place on 30 January.

The reform of the UNDS is aimed at making the organization more nimble, effective, flexible and efficient in supporting UN Member States in achieving the Sustainable Development Goals. The reform aims to make UN fit for purpose, to bring decision-making closer to the point of delivery, to make sure that no one is left behind.

Ms. Daniels warmly welcomed the participants and quoted UN Secretary-General António Guterres: “Our shared goal is a 21st century UNDS that is focused more on people and less on process, more on results for the poorest and excluded and less on bureaucracy, more on integrated support to the 2030 Agenda and less on business as usual.”

She explained that the reform aims to reposition the UNDS with a stronger, better-defined collective UN identity as a trusted, reliable, cohesive, accountable and effective partner; one that Member States, including I.R. of Iran, rely on.

The reform should yield a UNDS with clearer internal and external accountability for contributing to national needs and priorities, and with better managerial capacities, skillsets and resources.

Ms. Daniels said: “As of January 1st, the reform of UNDS has kicked off, including reinvigorated and independent Resident Coordinator system and new generation of the UN Country Teams.”

Ms. Daniels also explained that as of 1 January 2019, the UN Secretary-General entrusted her with new functions as the highest-ranking UN representative in Iran. RC reports directly to UN Secretary-General. She is one of 129 RCs, leading UN Country Teams to deliver collective responses to national needs and ensure system-wide accountability on the ground.

In this context, it is worthy to mention that the RC Office has been delinked from UNDP and thus, globally, the RC no longer serves as UNDP Resident Representative.

The Resident Coordinator also explained that the profiles of new generation of UN Country Teams are better tailored to deliver results, including through a UN Development Assistance Framework (UNDAFs) which is the main strategic instrument to respond to national needs and priorities.

The Resident Coordinator spoke about more coherent and better-coordinated utilization of global and regional resources to better meet the needs of the countries. She mentioned shift in donor funding towards more predictable and flexible resources and greater transparency and accountability towards Member States.

UNDP Resident Representative a.i. Ms. Razina Bilgrami, elaborated on the reform from the Development Agency perspective, UNHCR Representative, Mr. Ivo Freijsen reflected on impact of the reform on the humanitarian sector and briefed the audience on the Global Compact on Refugees, and Dr. Christoph Hamelmann, WHO Representative spoke about important reform initiatives of the Member States in the health sector and reflected on the reform from the point of view of the Specialized Agency. UNESCO Officer-in-Charge, Ms. Maryam Soltanzadeh highlighted key points of the UNESCO reform for the audience followed by a question and answer session.

Ms. Daniels expressed her appreciation of the support provided to UN by the international community and highlighted importance of strategic partnerships with the diplomatic corps as well as with the Government of Iran, civil society and media. She emphasized that the strength of UN is in its Member States, in multilateralism.

UN information materials were distributed to the participants. Guests also visited UN-Iran partnership exhibition of historic photos and documents, which was prepared jointly with the Ministry of Foreign Affairs and IRNA.