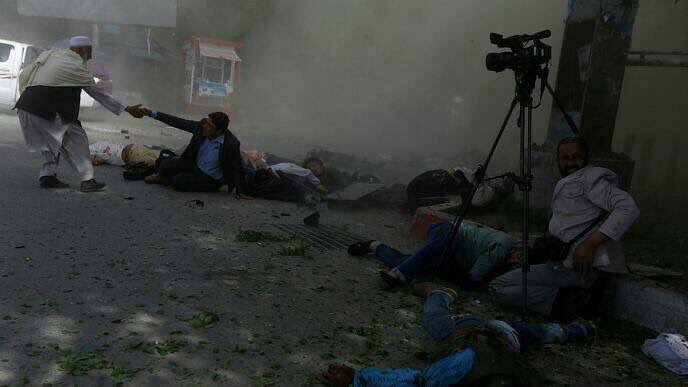 Strongly condemning terrorist attacks in the Afghan capital, Kabul, and in Kandahar, senior United Nations officials, including Secretary-General António Guterres, underscored the need to bring those behind the attacks to justice.

According to reports, at least 14 civilians were killed and over 30 injured in two attacks that took place on Monday morning (local time) in a heavily populated neighbourhood in central Kabul. The second attack was timed 30 minutes later to target journalists arriving on the scene and emergency services personnel seeking to provide aid to victims of the first attack.

“The deliberate targeting of journalists in the attack highlights once again the risks media professionals face in carrying out their essential work,” Mr. Guterres said in a statement attributable to his spokesperson.

“Those responsible for such crimes must be swiftly brought to justice,” he added.

In a third attack, at least 11 children were killed in a suicide bombing that reportedly targeted a military convoy in Kandahar province.

“These attacks caused untold human suffering to Afghan families,” Tadamichi Yamamoto, the Special Representative of the Secretary-General for Afghanistan and the head of the UN Assistance Mission in the country (UNAMA), said in a separate news release.

He also condemned the attacks in Kabul, coming just ahead of World Press Freedom Day, as a “direct assault on freedom of expression.”

Mr. Yamamoto also reiterated the protections accorded to civilians under international humanitarian law and called on all parties to uphold their obligations, “at all times”.

The UN officials also extended their condolences to the families of the victims and wished a speedy recovery to those injured.