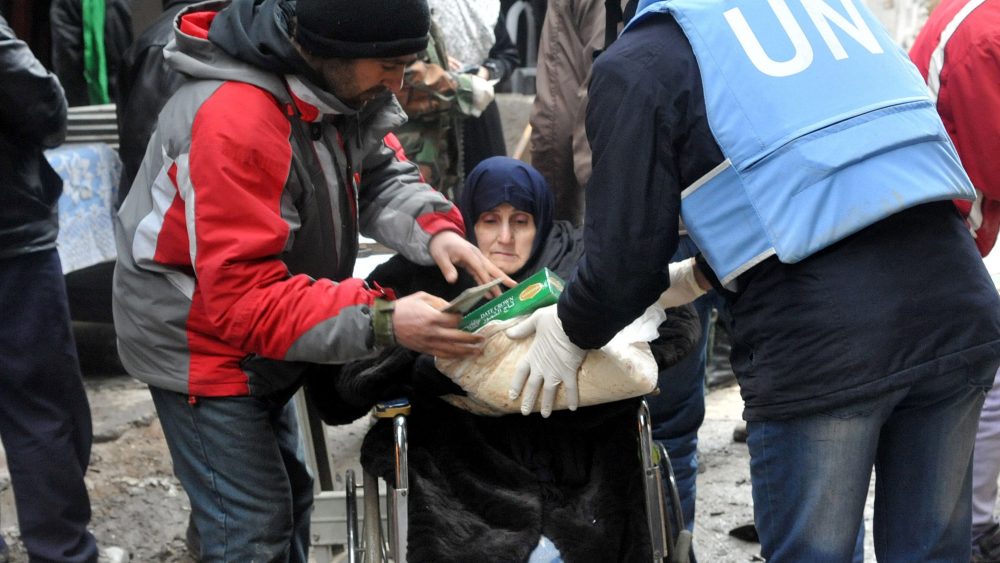 In the first full, completed, cross-line delivery via road in August, inter-agency convoys have reached some 75,000 people in al-Waer in Syria’s Homs province with life-saving humanitarian assistance, the United Nations humanitarian arm has reported.

“While [we welcomed] convoy, the level of access to besieged areas in August was wholly unacceptable,” Alessandra Vellucci, Director of the UN Information Service said, on behalf of the UN Office for Coordination of Humanitarian Affairs (OCHA), at the regular press briefing in Geneva.

The humanitarian delivery, undertaken through two convoys on 23 and 25 August, comprised of food, health, nutrition and non-food items for populations in the besieged town al-Waer.

Concerning relief for Aleppo, Jessy Chahine, a spokesperson for the Office of the Special Envoy for Syria said that the UN was working day and night on the preparation of its humanitarian mission but awaited the concurrence by all parties in order to make sure that the mission could move towards both east and west Aleppo.

Similarly, Joel Millman, spokesperson for the International Organization for Migration (IOM), informed journalists that the organization was delivering supplies to Aleppo under its ‘whole of Syria’ programme.

He noted that on 22 August, despite security precautions one truck carrying IOM aid had been targeted, destroying the cargo of humanitarian supplies inside and injuring one aid worker.

Pause in fighting desperately needed to save lives: UNICEF chief

Meanwhile, in a statement issued yesterday, Anthony Lake, Executive Director of UN Children’s Fund (UNICEF) has said that the agency is at the ready to provide urgently needed humanitarian assistance, including medicines, vaccines and nutritional supplements but underscored the desperate need for a pause in fighting to actually deliver them.

Pointing out that since early July, more than 100,000 children remain trapped in eastern parts of Aleppo city, he expressed:

“Every child there – everyone affected – needs an immediate pause to the fighting in Aleppo, and every second of every minute counts when it comes to protecting and saving the lives of children.”

Additionally, a statement issued by the Office of the UN Special Envoy for Syria has said that the situation in Darayya is extremely grave and that it is tragic that the repeated appeals to lift the siege in place since November 2012, and cease the fighting, have never been heeded.

The statement noted that Staffan de Mistura had been made aware overnight of an agreement to evacuate residents, both civilians and fighters, starting yesterday.

It clarified that the UN was not consulted or involved in the negotiation of the agreement.

According to the statement, Mr. de Mistura has appealed to the co-chairs of the International Syria Support Group (ISSG) and co-sponsors of the cessation of hostilities and other ISSG members to ensure that the implementation of this agreement and its aftermath is in full compliance with international humanitarian law and protection standards.

The respective taskforces on a ceasefire and on humanitarian issues, created by the ISSG, have been meeting separately since early this year on a way forward on the crisis. Russia and the United States are the co-chairs of ISSG, which comprises the UN, the Arab League, the European Union and 16 other countries.

The statement added that a UN humanitarian team is reaching out to all parties, including the local population.

“It is imperative that people of Darayya are protected in any evacuation that takes place, and that this takes place voluntarily,” the statement noted.

“The world is watching,” it concluded.