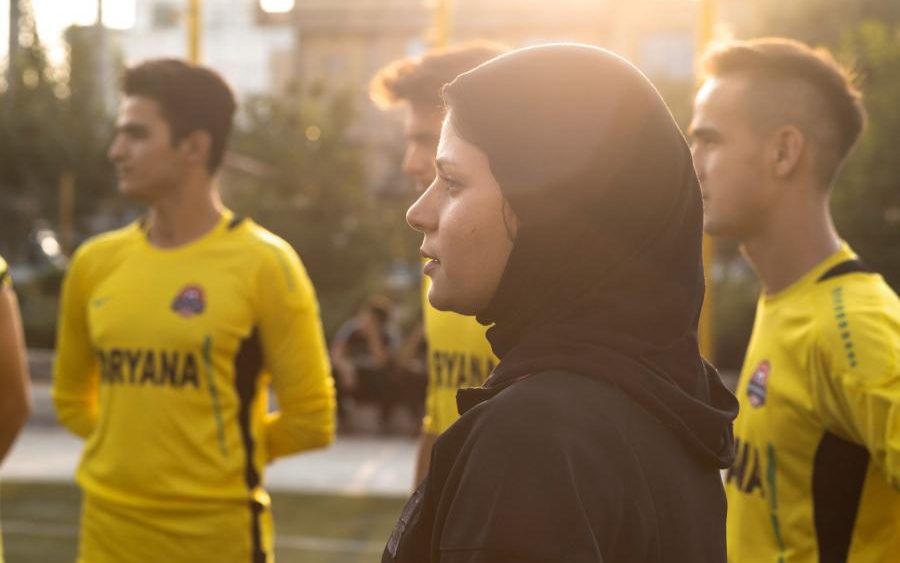 Standing on the sidelines of a football pitch, whistle in hand, Rozma Ghafouri watches a group of young Afghan girls dribble the ball. One of them slows as she reaches the goal, adjusts her stance, and knocks the ball into the back of the net. Her teammates erupt into cheers and Rozma blows the whistle to signal the end of the match.

As the girls pack away their training kit, Rozma approaches the bench where the newest members of the team are sitting. She congratulates them on their progress, encourages them to come to the next practice, and gently asks them about their lives at home.

The 29-year-old is not just the team coach but a fellow Afghan. She draws on her own at-times harsh childhood to get young refugees and undocumented Afghans aged between 11 and 15 – out of work and back into school.

Rozma and her family fled Afghanistan 23-years-ago. After working as a laborer for much of her childhood, she founded the Youth Initiative Fund in the Islamic Republic of Iran’s southern city of Shiraz in 2015 to help at-risk children.

With the backing of UNHCR, the UN Refugee Agency, and its Iranian government counterpart, the Bureau for Aliens and Foreign Immigrants’ Affairs (BAFIA), the project now helps some 400 children a year, many of them out-of-school girls, through inclusion in sports and social activities, enrollment in literacy and numeracy courses and counseling with their families. Seeing what an impact the project has had on Afghan children’s lives in Shiraz, UNHCR and BAFIA are in the process of duplicating it in other provinces of Iran.

Every day, volunteers with the Youth Initiative – who include Afghans and Iranians – go door to door in the neighborhoods of Shiraz that are mostly populated by Afghans to talk to the parents of children who have either never gone to school or have had to drop out. Rozma and the team build a relationship with the parents and seek permission for their children to come to sports practice every week.

As the parents see the positive change that sports activities led by Rozma have on their children, they become more willing to listen to her pleas to let them go to school.

While both boys and girls must often work to help their families, girls face the added challenge of cultural norms which view it as unnecessary for daughters to be educated. Some in the Afghan community are also pressured into early marriage. For her dedication to helping young Afghans in Iran, Rozma has been chosen as the regional winner for Asia for UNHCR’s Nansen Refugee Award, a prestigious annual prize that honors those who have gone to extraordinary lengths to help forcibly displaced or stateless people.

This year’s award laureate will be announced on 1 October and the prize will be presented by UNHCR at a virtual ceremony on 5 October.

Rozma was nearly six years old when the Taliban overran her hometown in the northeast Afghan province of Kapisa and she fled the country with her parents and four siblings. In Iran, she was safe, but during her first years in exile, the family barely had enough to live on, let alone to cover school fees.

She and her siblings also worked at a brick factory where the family lived in a cramped side-room with no toilets. Even when she finally started school several years later, she had to continue doing part-time jobs in the evenings to help pay for her uniform, books, and transport.

In between homework, household chores, and those jobs, Rozma needed an activity to brighten her days

It was thanks to her mother that, after she had done her chores, she was allowed to run outside to kick a football around with her sisters and the other children in the neighborhood.

Among beneficiaries of the project that Rozma set up are 28-year-old Nazi and her daughter Nazanin, 12, who both now attend sports sessions. “Thanks to the Youth Initiative, my daughter gets to have a childhood, to play, to socialize with other children, to dream…. These are things I was never able to do,” says Nazi.

Rozma could not be happier that football is gradually becoming more accepted in the Afghan community as a sport for girls. Rozma’s sisters were even invited to play in an all-girls football team in their native Afghanistan.

The Nansen Refugee Award is named in honor of Norwegian explorer, humanitarian, and Nobel Peace Prize winner Fridtjof Nansen, the first High Commissioner for Refugees, who was appointed by the League of Nations in 1921. It aims to showcase his values of perseverance and commitment in the face of adversity.