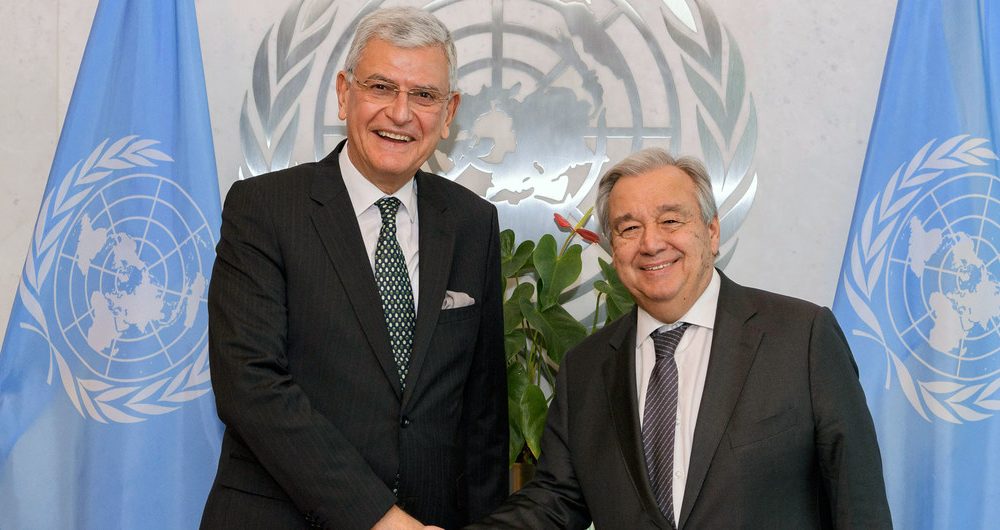 The COVID-19 pandemic has highlighted the ‘crucial role’ of the UN and its agencies, according to the veteran Turkish diplomat and parliamentarian who, as the only candidate for the top job, is slated to lead the historic 75th session of the General Assembly which begins in September.

Ambassador Volkan Bozkir outlined his priorities as president of the world’s foremost multilateral forum, during a virtual interactive dialogue with UN Member States held on Friday.

“The outbreak has coincided with the 75th anniversary of the UN. This is a stark reminder of the importance of effective multilateralism and, particularly, the crucial role of the UN and its agencies,” he said.

As the coronavirus does not see borders or discriminate, he stated that the fight to defeat it should not result in stigmatization, inequality or injustice.

“A world free of COVID-19 will require the most extensive public health and social recovery effort all over the world. Build back better should be our motto.”

Mr. Bozkir commended prompt action undertaken so far by the UN in the face of the crisis, including the adoption of several General Assembly resolutions which stress solidarity and cooperation.

“I truly believe that the General Assembly with its universal membership and equal status of all its members, as well as its democratic credentials, is the most appropriate platform to provide political guidance in responding to the pandemic,” he stated.

Mr. Bozkir, who has served with Turkey’s foreign service for nearly 40 years, is the sole candidate for the presidency of the body that brings together all 193 UN Member States.

He pledged to work towards consolidating trust and cohesion among countries, major groups at the UN, and international organizations, and to ensure that the world’s most vulnerable people have  a voice.

With countries embarking on a Decade of Action to achieve the Sustainable Development Goals (SDGs) by 2030, he called for the world’s  least developed countries, landlocked developing nations and small island developing states to remain a top global priority.

“The needs of the African countries and their special circumstances,  including the 2063 Agenda, will continue to receive your attention”, he added, referring to the African Union’s blueprint to transform the continent.

“Another cross-cutting priority is to improve the living standards and rights of women. Women’s full and equal particiipation in all spheres of life, by strengthening their status within society, is an absolute must in all our endeavours.”

As president of the UN General Assembly, or “PGA”, he will be guided by efficiency, effectiveness, accountability and non-discrimination.

“Consensus building will be one of the core efforts during my tenure. I will use the extent possible, the moral authority and the soft power of the PGA. I will allow continuity with the work of the previous PGAs and make improvements where necessary,” he said.

“The overall agenda of our Organization requires close coordination among the UN decision-making bodies. I will try to address the gaps and duplications as they relate to the agenda of the General Assembly.”

Hopes for a return to normalcy

The extraordinary challenge of COVID-19 has prompted a change in the working methods of the UN General Assembly.

Physical distancing and stay-at-home restrictions mean representatives can no longer meet in person, including to vote on resolutions, which are now circulated under a process known as “silence procedure”.

Ambassadors are given a 72-hour window to consult their capitals. If they all agree on a resolution, it is passed. If not, the resolution is not adopted as the “silence” has been broken.

“I hope that we will soon return to normal functioning of the Organization and be able to hold physical meetings without risking our health”, said Mr. Bozkir.

“If conditions do not permit us to do so, we should find ways and means, including technical infrastructure, to enable the General Assembly and other decision-making bodies to resume their functions in full.”

He has appointed Ambassador Courtenay Rattray of Jamaica to consult with Member States on the process.