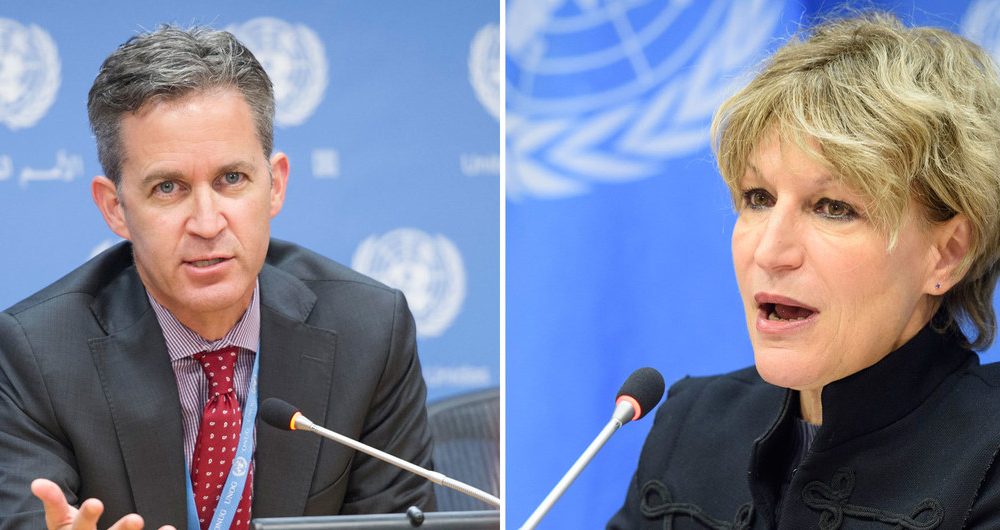 Independent UN rights experts said on Wednesday they were “gravely concerned” over allegations that in 2018, a messaging app account belonging to the Crown Prince of Saudi Arabia was used to hack into The Washington Post owner’s mobile phone, calling for an “immediate investigation” by authorities in the United States.

The two Special Rapporteurs – who do not speak on behalf of the UN overall, and operate in an independent investigative capacity – said in a statement that they had recently received information suggesting that a WhatsApp account belonging to Crown Prince Mohammed bin Salman was used to deploy digital spyware on the phone of Jeff Bezos, who is also CEO of Amazon, “in an effort to influence, if not silence” the newspaper’s reporting on the Kingdom.

“The allegations reinforce other reporting pointing to a pattern of targeted surveillance of perceived opponents and those of broader strategic importance to the Saudi authorities, including nationals and non-nationals”, said Agnes Callamard, UN Special Rapporteur on summary executions and extrajudicial killings, and David Kaye, UN Special Rapporteur on freedom of expression.

“These allegations are relevant as well to ongoing evaluation of claims about the Crown Prince’s involvement in the 2018 murder of Saudi and Washington Post journalist, Jamal Khashoggi”.

They spelled out that the alleged hacking of Mr. Bezos’ phone, and those of others, if proven, would be in contravention of fundamental international human rights standards, and demands an “immediate investigation” by US and other relevant authorities, “including investigation of the continuous, multi-year, direct and personal involvement of the Crown Prince in efforts to target perceived opponents”.

The reported surveillance of Mr. Bezos, allegedly through software developed and marketed by a private company was “transferred to a Government without judicial control of its use”, said the experts.

If true, they maintained it was “a concrete example of the harms that result from the unconstrained marketing, sale and use of spyware”.

To protect against its abuse, surveillance through digital means must be “subjected to the most rigorous control”, according to the independent experts, including by judicial authorities and national and international export controls.

Moreover, they argued that “it underscores the pressing need for a moratorium on the global sale and transfer of private surveillance technology”.

“The circumstances and timing of the hacking and surveillance of Bezos also strengthen support for further investigation by US and other relevant authorities of the allegations that the Crown Prince ordered, incited, or, at a minimum, was aware of planning for but failed to stop the mission that fatally targeted Mr. Khashoggi in Istanbul”, the UN experts stated.

While the Kingdom was supposed to be investigating Mr. Khashoggi’s murder and prosecuting those responsible, the Rapporteurs said, “it was clandestinely waging a massive online campaign against Mr. Bezos.”

A 2019 forensic analysis of his iPhone assessed with “medium to high confidence”, that it was infiltrated on 1 May 2018 through a video sent from Mohammed bin Salman’s WhatsApp account.

According to the analysis, the Crown Prince and Mr. Bezos exchanged numbers the month before the alleged hack.

The forensic analysis found that within hours of receiving the video from the Crown Prince’s account, “an unprecedented exfiltration of data” from the iPhone began.  After an initial spike, the unauthorized transfer of data continued undetected for months.

The analysis also assessed that the intrusion was likely undertaken through a prominent spyware that was identified in other Saudi surveillance cases, the experts said.

They added that the allegations were reinforced by separate evidence of Saudi Arabia targeting dissidents and perceived opponents.

The Saudi Arabian Embassy in Washington, said on Tuesday night that any suggestion the Kingdom was behind the hacking of Mr. Bezos’ phone, “are absurd”.

The Special Rapporteurs noted that the claims regarding Mr. Bezos’ hacked phone are also consistent with the widely reported role of the Crown Prince in allegedly leading a campaign against dissidents and political opponents.

They recalled that the iPhone infiltration occurred from May to June in 2018, when the phones of Jamal Khashoggi’s associates, Yahya Assiri and Omar Abdulaziz, were also hacked, allegedly using malware called Pegasus.

In May 2018, Jamal Khashoggi was a prominent columnist for The Washington Post, writing stories that raised concerns about the Crown Prince’s rule.

That October, government officials murdered him in the Saudi consulate in Istanbul, Turkey.

The newspaper subsequently began covering extensively the disappearance and murder investigation and expanded its reporting on a number of related aspects of the Crown Prince’s rule in Saudi Arabia.

According to the forensic analysis, after Mr. Bezos’ mobile was hacked, the Crown Prince sent him WhatsApp messages in November 2018 and February 2019, “in which he allegedly revealed private and confidential information about the billionaire publisher’s personal life that was not available from public sources”, said the experts.

“During the same period, Mr. Bezos was widely targeted in Saudi social media as an alleged adversary of the Kingdom. This was part of a massive, clandestine online campaign against Mr. Bezos and Amazon, apparently targeting him principally as the owner of The Washington Post.”

Ms. Callamard and Mr. Kaye “expect to continue investigating the murder of Mr. Khashoggi and the growing role of surveillance in permitting the unaccountable use of spyware to intimidate journalists, human rights defenders and owners of media outlets”, concluded the statement released by the UN human rights office, OHCHR.