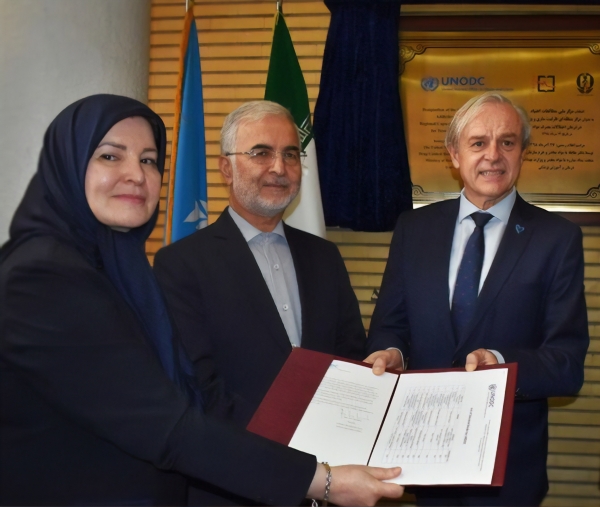 Supported by the United Nations Office on Drugs and Crime (UNODC), the Iranian National Center for Addiction Studies (INCAS) in Tehran was officially designated as the “Regional Capacity Building and Research Centre” on 18 December. The Centre will serve as a platform to promote regional cooperation and strengthen the implementation of the science and evidence-based drug demand reduction programs in Iran and in the region.

The inauguration ceremony was organized in close cooperation with the Drug Control Headquarters (DCHQ) and the Iranian National Center for Addiction Studies (INCAS) and was attended by high-level officials from UNODC, Iran’s Islamic Parliament, its Ministry of Health and Medical Education, the Permanent Mission of the Islamic Republic of Iran to the United Nations in Vienna as well as the international community residing in Tehran.

The Head of INCAS, Dr. Afarin Rahimi-Movaghar, highlighted that the INCAS clinic has had more than 1500 registered cases and continues to provide pharmacological and non-pharmacological interventions for opioids, stimulants and alcohol dependence. In addition to that, the clinic has played a crucial role in clinical research activities. It has provided practical training to more than 1400 physicians and counselors.

Jean-Luc Lemahieu, Director of the UNODC Division for Policy Analysis and Public Affairs, referred to the signing of a Memorandum of Understanding between UNODC and Iran on 14 October 2019 which initiated the work of the INCAS as a Regional Capacity Building Center. He described Iran as a strategic partner in the fight against illicit drugs and drug trafficking and as one of the leading countries in the region in providing services on drug prevention, drug treatment, and HIV care. Mr. Lemahieu said that world drug challenges remain formidable, whether it is opiates use, abuse of new psychoactive substances, synthetic opioids or methamphetamine. He emphasized the need for further cooperation to devise tools to tackle these global challenges.

Dr. Eskandar Momeni, Secretary-General of the DCHQ, referred to the World Drug Report published by UNODC, stating that drug-induced disorders are increasingly on the rise; in 2017, 586 thousand deaths had been reported due to drug addiction worldwide. He highlighted Iran’s efforts in adopting numerous strategies to counter supply, entry, and distribution of narcotics in the country as well as drug demand reduction.

Alexander Fedulov, UNODC Iran Country Representative, expressed UNODC’s appreciation for the Iranian Government’s successes in combatting drug use and illicit trafficking, and UNODC’s understanding of the financial and human costs that Iran has paid in its efforts. He reiterated UNODC’s commitment to supporting Iran in combatting drug supply and reducing drug demand in the country.

The activity took place thanks to the funding support of the Government of Japan and was implemented as a collaboration of UNODC and DCHQ and its member organizations, aiming to establish a Regional Capacity Building and Research Centre in Iran which would deliver training on evidence-based drug dependence treatment and care to professionals in the wider region.