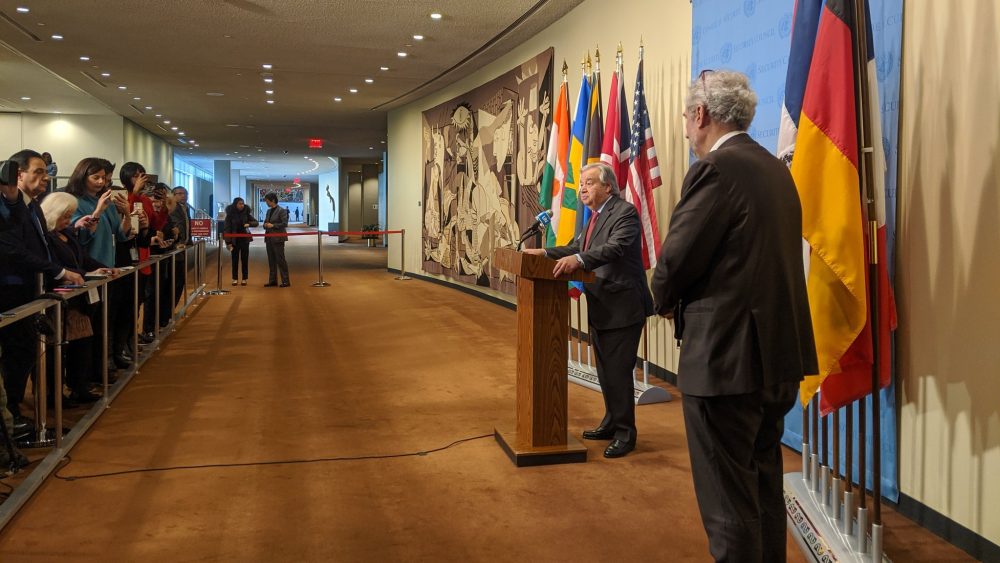 The UN Secretary-General António Guterres called on world leaders to de-escalate geopolitical tensions on Monday, which he described as being “at their highest level this century” as the new decade dawns.

The New Year has begun with our world in turmoil. We are living in dangerous times”, said the UN chief, noting that turbulence is only escalating.

“Even nuclear non-proliferation can no longer be taken for granted” he added, without specifically referencing the events of recent days following the targeted killing by a United States drone, of Iran’s most influential general, Qasem Soleimani, in Iraq last Friday.

Iran has vowed to avenge the killing of the elite Quds Force commander, and on Sunday it signified it would no longer be bound by the restrictions on its nuclear program, outlined in the 2015 deal known as the Joint Comprehensive Plan of Action, or JCPOA. The deal was debated in the Security Council just last month.

On 1 January, Mr. Guterres also expressed his deep concern at the announcement by the Democratic People’s Republic of Korea (DPRK), commonly known as North Korea, that it was ending its self-imposed moratorium on nuclear missile testing.

On Sunday, the Iraqi parliament also passed a non-binding resolution calling for US troops to leave the country, in a clear response to the killing of the Iranian general on their soil. In response, President Trump has threatened Iraq with sanctions if forced to withdraw its forces, and also threatened on Twitter, to destroy multiple sites of “cultural” significance within Iran, if there are reprisal attacks against Americans.

Mr. Guterres told the noon stakeout for correspondents at UN Headquarters in New York, that a “cauldron of tensions is leading more and more countries to take unpredicted decisions with unpredictable consequences and a profound risk of miscalculation.

At the same time, we see trade and technological conflicts that fracture world markets, undermine growth and widen inequalities”, he added.

Furthermore, said the UN chief, “our planet is on fire.  The climate crisis rages on.

In many parts of the world, we see many people frustrated and angry.  We see increased social unrest and growing extremism, nationalism and radicalization, with a dangerous advance of terrorism, notably in Africa.

He said it was clear that “this situation cannot go on. I have been following the recent rise in global tensions with great concern. I am in constant contact with leading officials around the world.

The UN chief had a clear four-point message for what needs to happen now, in capitals across the world: “Stop escalation. Exercise maximum restraint. Re-start dialogue. Renew international cooperation.”

“Let us not forget the terrible human suffering caused by war,” he concluded. “As always, ordinary people pay the highest price.  It is our common duty to avoid it.”