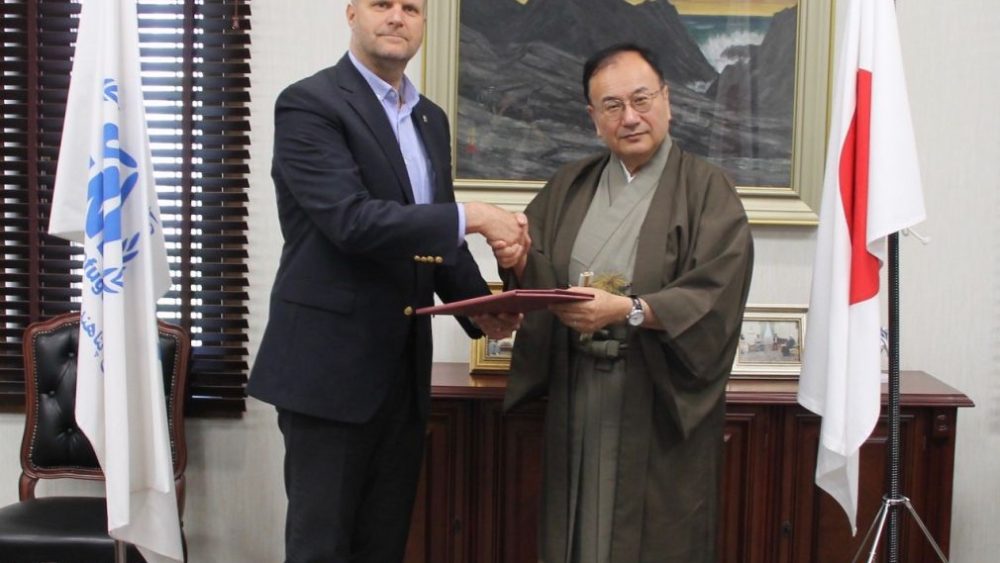 The Government of Japan has reaffirmed its commitment to supporting Afghan refugees in the Islamic Republic of Iran through a recent contribution of USD 973,214 to the Office of the United Nations High Commissioner for Refugees (UNHCR) in Iran.

The Government of Japan’s contribution will be used to fund UNHCR-supported activities targeting vulnerable Afghan refugee families implemented from April to December 2019, in coordination with UNHCR’s main government counterpart, the Bureau for Aliens and Foreign Immigrants’ Affairs (BAFIA).

The contribution supports the implementation of the multi-partner Solutions Strategy for Afghan Refugees as part of national efforts to enhance access to inclusive refugee-related policies in the areas of health, education and livelihoods. Specifically, these funds will be directed towards supporting the Universal Public Health Insurance (UPHI), Persons with Specific Needs, school construction, Technical and Vocational Training for refugees, and basic infrastructure projects in settlements and remote urban areas.

This year marks the 40th commemoration of the Afghan refugee displacement situation. Appreciating Japan’s ongoing support to Afghan refugees in Iran, UNHCR Representative, Mr. Ivo Freijsen, highlights the need for the international community to step up and support countries which are shouldering large numbers of refugees, like Iran. “Japan’s contribution is in line with the spirit of the recently affirmed Global Compact on Refugees, which seeks to better support host countries in managing large refugee movements, including the protracted Afghan situation”.

Japanese Ambassador to Iran, H.E. Mitsugu Saito, reaffirmed the close partnership between Japan and UNHCR, “Japan stands as one of UNHCR’s largest and most prominent donors and contributes globally as well as in Iran, where UNHCR plays a vital role in coordination with the Government of the Islamic Republic of Iran for the sake of supporting the refugees”.

Mr. Freijsen adds, “Through Japan’s committed contributions over the years, UNHCR, in coordination with BAFIA, has been able to enhance refugees’ access to education, livelihoods opportunities and healthcare – particularly through Iran’s flagship health insurance scheme for refugees, UPHI”.

Providing for close to 1 million registered Afghan refugees and almost 30,000 Iraqi refugees, the Islamic Republic of Iran is currently one of the largest refugee hosting countries in the world. Of these refugees, 97 per cent reside in urban areas, side-by-side with Iranian host communities. The remaining three per cent live in 20 government-run refugee settlements. In addition to registered Afghan refugees, government estimates indicate that there are 1.5 to 2 million undocumented Afghans in the Islamic Republic of Iran.

UNHCR has maintained an uninterrupted presence in the country for 35 years, and works in close coordination with its main government counterpart, BAFIA, to provide protection and assistance to Afghan and Iraqi refugees throughout the Islamic Republic of Iran.