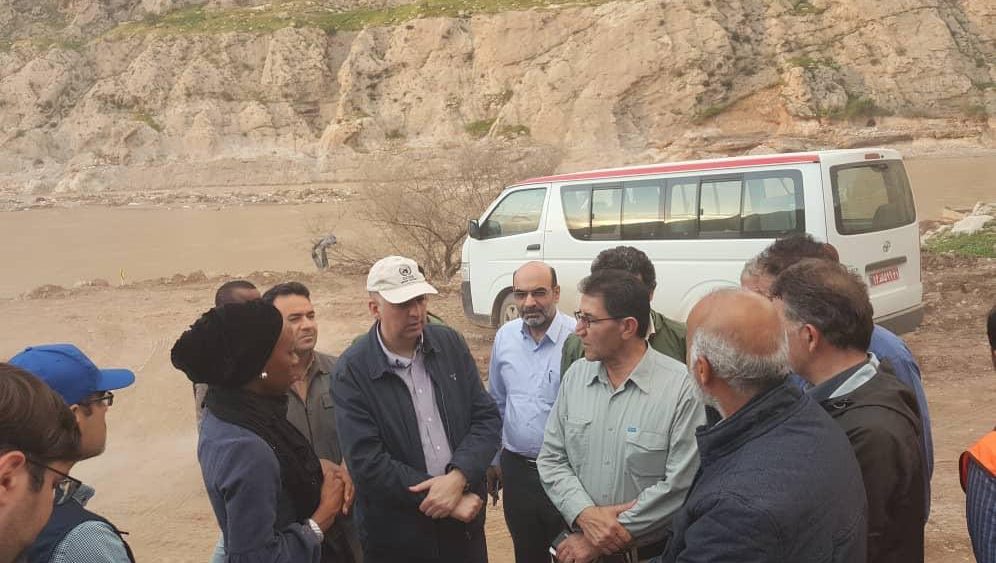 Op-Ed by UN Resident Coordinator in IRI in Hamshahri Newspaper

We, at the United Nations (UN), are deeply saddened by the loss of life, injuries and extensive damage caused by the severe floods in Iran.

On behalf of the UN family and on behalf of the Secretary-General, I extend my sincere condolences to the families of the victims, to the Government, and to the people of Iran.

The UN supports the Government and the people of Iran and that is what we have been doing right from the beginning of this disaster.

The UN has taken necessary actions to ensure that it’s operations and work in Iran continue.

So far, we have contributed, over and above our existing and general resources, 1.4 million US Dollars in kind for the ongoing immediate flood response. Our response focuses on 6 priority sectors:

The UNHCR, in coordination with the Bureau for Aliens and Foreign Immigrants Affairs (BAFIA) of the Ministry of Interior, used existing in-country resources to assist government-led relief efforts and deliver critical non-food items on March 27th and April 4.  In addition, drawing on additional headquarters reserves, a UNHCR air freight including 1,000 tents as well as blankets, sleeping mats and kitchen items, landed in Iran last week and these relief items will imminently be distributed in coordination with the government to the most affected communities, including refugees.

Last week WHO also airlifted medical supplies to respond to the growing health needs of thousands of people who have been displaced as a result of the floods. The cargo which included trauma, health, cholera and non-communicable disease kits, a four-wheel drive, diesel generator and other commodities, requested by the Ministry of Health and Medical Education (MoHME), arrived in Tehran last week and was handed over to the Emergency Medical Services of the MoHME.

Last week also was a very busy week, in which we developed the plan for immediate, medium- and long-term actions; met with Government twice including with Ministry of Foreign Affairs, National Disaster Management Organization, Ministry of Interior as well as up to 20 governmental institutions.

The UN team in Iran convenes regular meetings with the international community and diplomatic missions to highlight the impact of floods and to advocate for resources to meet the needs of those affected.

Several other agencies involved in the immediate response UNDP, UN-Habitat, UNESCO, FAO and WFP are at various stages of action while other agencies UNODC, UNIDO, UNAIDS and IOM will be involved in medium to long term actions.  This effort has been supported by OCHA.

It has been hectic and tense, but most important of all, it is truly One UN joint effort to support the Government.   However, much more is needed.

After immediate life-saving assistance, the UN will continue to support government-led efforts for mid-term and long-term strategies to prevent and mitigate natural disasters.

Last week, three UN teams visited affected areas in three provinces of Lorestan, Golestan and Ilam. I personally travelled to Lorestan and saw the devastation firsthand.  I wish to recognize the government’s search and rescue efforts. Loss and damage of critical infrastructure (homes, roads, railways, etc.) is significant and much remains to be done.

During our three missions we meet with local authorities and communities to discuss the technical and logistical support that UN can provide to help address the needs of the people affected by the floods.

With regards to the Khuzestan, our colleagues are going there later this week. We are also working with our government partners and receiving data on the priority needs of people in Khuzestan.

The UN will continue to work closely with government counterparts and the international community to meet the needs of those affected by this disaster.

The English version of the op-ed was originally published by United Nations Iran. Click here to read.