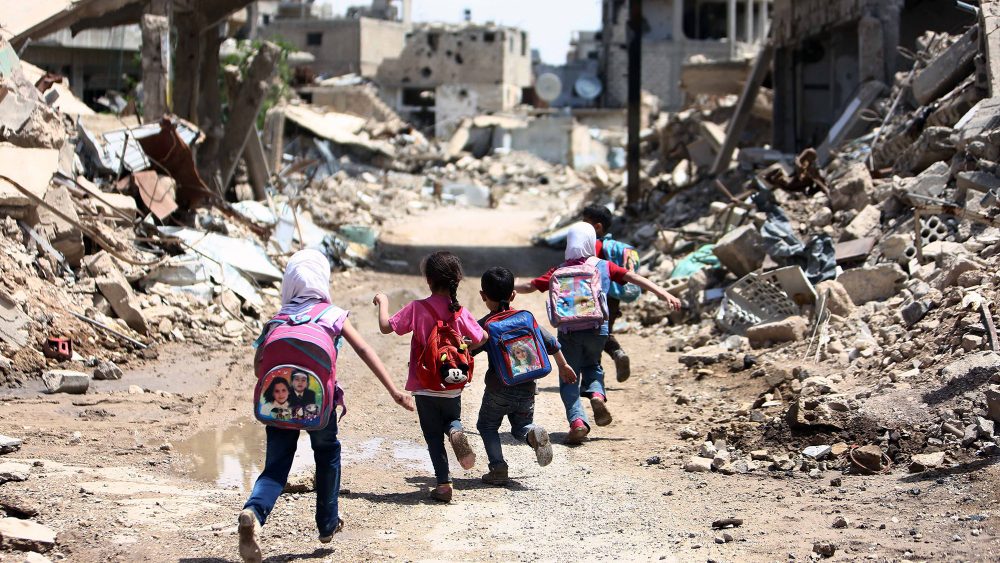 A child’s “real passport” to the future – education – should be stamped in the classroom, not at a border checkpoint, UN Special Envoy for Global Education Gordon Brown said on Tuesday.

Ensuring that the world’s children have a place in school classroom is essential to achieve the Sustainable Development Goal (SDG) 4, which calls for quality education for all by 2030.

Speaking to journalists at UN Headquarters in New York, Mr. Brown warned that “99 per cent of the world’s young refugees who are now becoming the invisible generation will never get a place in college or higher education; and only 20 per cent will get a secondary education”.

“It’s time the world woke up to the horror of so many children devoid of hope,” he stated.

Highlighting the urgency of the situation, Mr. Brown said there are perhaps 75 million children caught in conflict. “[They] are broken by the absence of hope, the soul crushing certainty that there’s nothing ahead for which to plan or prepare, not even a place in a school classroom.”

He lamented the desolation of a “lost generation” and made an urgent appeal for new funding for more than 30 million displaced and refugee young people.

Recounting the situation of the Maria refugee camp in Greece, where “no formal education is on offer to any of the hundreds of children who are there”, Mr. Brown told journalists the story of two young boys – one only 10 years old – who attempted suicide in the camp.

Mr. Brown said that “at that age, their lives should be full of hope and excitement at every new dawn – but instead young people are so devoid of hope, that they attempted to take their own lives”.

Noting that the Security Council was currently on the difficult circumstances in Yemen affecting millions of children, Mr. Brown, the former British Prime Minister, also highlighted the escalating crisis in Venezuela, the half a million out of school children alone in Central African Republic (CAR), the need to reopen a 1,000 schools in Afghanistan – where there are still 3.7 million out of school children – and the ongoing refugee challenge being driven by situations in, among others, Myanmar, Sudan and Syria.

On a positive note, Mr. Brown announced that the Education Cannot Wait Fund (ECW) – which was set up in 2016 to provide opportunities for displaced children in crisis – will launch on Thursday a programme for safe and reliable education for half a million children in Afghanistan, including more than 320,000 girls.

On 27 February, in CAR, the Government, ECW, and a coalition of partners, will also launch a new three-year education programme to reach an estimated 900,000 thousand children – half of whom are girls – to address the violence and displacement that had left nearly half a million children out of schools.

Both initiatives follow a programme that was launched in Uganda in September last year to help with the influx of South Sudanese refugees.

Responding to questions from journalists, Mr. Brown noted the success of double-shift schools in Lebanon, highlighting the fact that from the 400,000 Syrian refugees in Lebanon who are now in school, almost 300,000 are in the double-shifts schools.

Discussing the pressing funding requirements to address the needs of children trapped in humanitarian crises, the Special Envoy announced the launch of the International Finance Facility for Education (IFFEd) which will serve 700 million children living in low- and middle-income countries, where the majority of out-of-school and displaced children reside.

“The facility is advancing rapidly with a high-level event scheduled in April where prospective donors are expected to agree to constitute the new $10 billion fund this year,” Mr. Brown concluded.