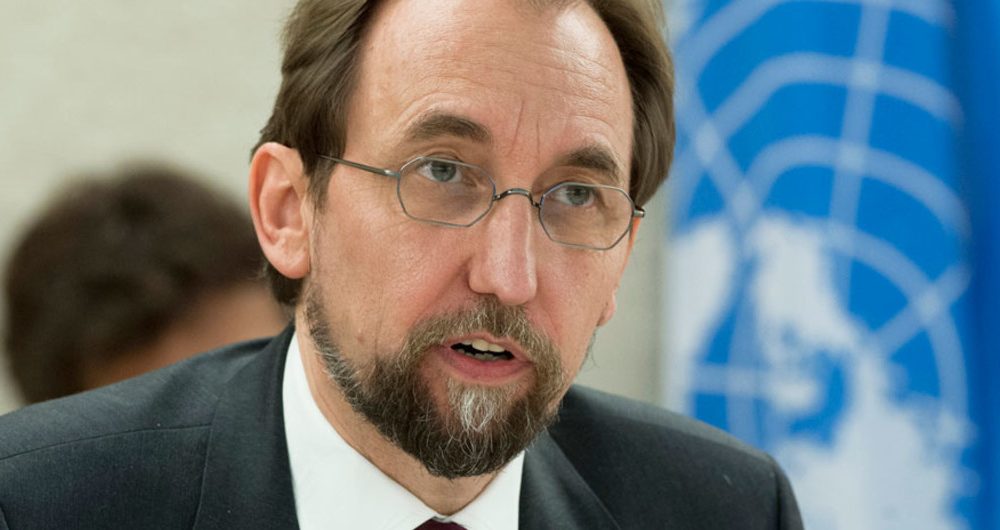 As part of his final global update, the United Nations human rights chief on Monday voiced his deep concern over recently-adopted United States border protection policies that have seen hundreds of migrant children forcibly separated from their parents.

“In the past six weeks, nearly two thousand children have been forcibly separated from their parents,” UN High Commissioner for Human Rights Zeid Ra’ad Al Hussein said in his opening remarks to the 38th session of the Human Rights Council in Geneva – the last session before his four-year term expires in August.

Mr. Zeid said that the American Association of Pediatrics in the US, had called it a cruel practice of “government-sanctioned child abuse” which may cause “irreparable harm” with “lifelong consequences”.

“The thought that any State would seek to deter parents by inflicting such abuse on children is unconscionable,” he said, calling on the United States to immediately put a stop to the policy, and ratify the Convention on the Rights of the Child.

In a statement issued on Monday, UN Secretary-General António Guterres defended the rights of migrant and refugee children, but did not single out the US.

“As a matter of principle, the Secretary-General believes that refugees and migrants should always be treated with respect and dignity, and in accordance with existing international law,” said a statement issued by his Spokesman Stéphane Dujarric.

“Children must not be traumatized by being separated from their parents. Family unity must be preserved,” said the statement.

The human rights situation in the US was one of the many topics to be discussed at the latest Human Rights Council session, which runs through 6 July.

Mr. Zeid also expressed his deep concern about a bill presented to Parliament in Hungary last month which, if adopted, would effectively criminalize human rights monitoring at borders and within border zones, as well as criminalizing the provision of information, legal aid and assistance to migrants.

The High Commissioner stressed that “people do not lose their human rights by virtue of crossing a border without a visa”.

At the onset of his speech, the UN human rights chief warned of the return of “chauvinistic nationalism” around the world, and urged leading politicians to combat this “menace that stalks our future.”

“Is it not the case, for example,” he asked, “that historically, the most destructive force to imperil the world has been chauvinistic nationalism – when raised to feral extremes by self-serving, callous leaders, and amplified by mass ideologies which themselves repress freedom.”

He said that the UN had been conceived to prevent the rebirth of chauvinistic nationalism, which was a primary cause of The Second World War.

“Chauvinistic nationalism is the polar opposite of the UN, its very antonym and enemy. So why are we so submissive to its return? Why are we in the UN so silent?” he exclaimed.

“The UN’s raison d’être is the protection of peace, rights, justice and social progress. Its operating principle is therefore equally clear: only by pursuing the opposite to nationalism – only when States all work for each other, for everyone, for all people, for the human rights of all people – can peace be attainable,” he added.

Mr. Zeid said that that over the last few years, he and his Office had rightly lived by the motto that “only fearlessness is adequate to our task at this point in time”, adding that they were “not ducking for cover, or using excuses or resorting to euphemisms” but displaying “fearlessness approaching that shown by human rights defenders around the world – for only by speaking out can we begin to combat the growing menace of chauvinistic nationalism that stalks our future,” he said.

On Syria, he said that the horrific violations and abuses committed since the conflict began – principally by the government and its allies, but including also the violent extremists and their supporters – have destroyed much of the country along with many of its people.

On Myanmar, he said, there are clear indications of well-organised, widespread and systematic attacks continuing to target the Rohingyas in Rakhine State as an ethnic group, amounting possibly to acts of genocide if so established by a court of law.

On North Korea, he said that “making human rights part of peace talks contributes to meaningful and sustainable peace in the long-term.”

Reflecting on how being in the top UN human rights job had affected him personally, Mr. Zeid said that it had been “the hardest, most challenging, most fulfilling responsibility I have held”. He noted that it had affected his relationship with the country of his birth, Jordan, which he had previously represented as UN Ambassador, for seven years up to 2007.

“However, this price is small in comparison to that paid by so many human rights defenders, and civil society more broadly, who sacrifice so much more, again and again, and who to me are the real heroes, genuine heroes of the human rights movement,” he said.