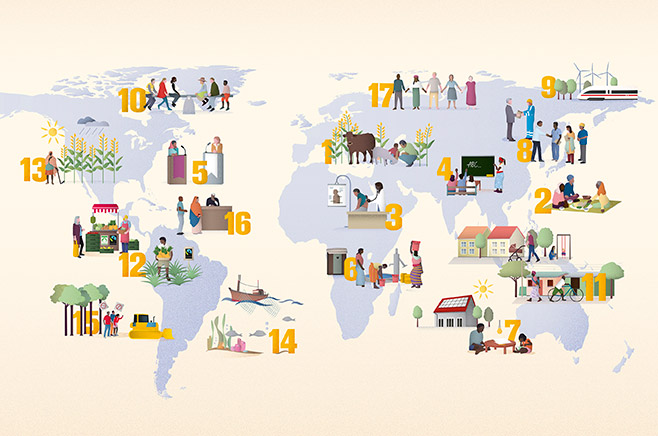 Over the past 20 years, the world has seen unprecedented progress of human development, as nearly 1.1 billion people have moved out of extreme poverty. But unfinished business remains. Today, roughly 800 million people still live in extreme poverty and inequalities are growing.

It is a promise to every man and woman who goes to bed hungry, every boy and girl who is deprived of education, every person who is fleeing violent conflict. Put to practice everywhere, this promise transforms our world!

You may ask what a set of goals and high-flown words on paper can do to address these enormous challenges in practice. It is a fair question. But the answer is – a lot!

The City of Montería in Colombia has become one of Latin America’s greenest cities by linking green urbanism, transportation and renewable energy to the SDGs.

In Mexico, a project on reduced inequalities focusing on children with disabilities has improved the lives of 12,000 boys and girls. 350 caregivers in 9 states have been trained in this UN-supported project to increase the quality of care, give better opportunities to children with disabilities to complete schooling, and ultimately increase their prospects of leading a life as fully empowered members of society.

In Kyrgyzstan, supported by the UN Secretary-General’s Peacebuilding Fund, local self-governing authorities and citizens have jointly identified and implemented more than 120 local infrastructure projects aimed at smoothing tensions over scarce natural resources. Multilingual education has reached more than 9,000 students, helping to increase inter-ethnic understanding and enhance the prospects of success for historically marginalized groups. These efforts contribute to achieving the SDGs and address root causes of conflict.

The leadership demonstrated by citizens and governments in these countries show the SDGs to be Country-led and Country-owned, and relevant everywhere.

Now, a particular challenge is to reach the 1.4 billion people that today live in fragile and conflict-affected situations. With the concept of “sustaining peace”, endorsed by the UN General Assembly and the Security Council, the world is recognizing that there cannot be peace without development and no development without peace. The United Nations is moving away from a narrow focus on time-bound peacekeeping interventions to emphasize efforts for long-term sustainable peace. This encompasses the imperative of conflict prevention and addressing root causes and drivers of violence. It also includes the need to address all stages of the conflict cycle, the importance of breaking siloes and formulate comprehensive and coherent approaches, as well as the need to ensure national ownership and inclusivity.

For countries on the move from violent conflict to peace and democratic rule, the 2030 Agenda can indeed be a powerful lever for change.

The world has the largest generation of young people ever. 1.8 billion young people between the ages of 10 and 24 are preparing for their future. This is by itself an incredible opportunity for change. In many countries in transition, youth has played a key role in instigating change.

In the Gambia, the youth population was crucial in choosing a peaceful path away from authoritarian rule nine months ago. In a country where a disproportionate number of young people risk their life to cross the Mediterranean in search for a better life, this new chapter is an opportunity to build a more open and inclusive society.

Like the Gambian youth, people have engaged to make the SDGs come alive across the globe. Over 10 million people voiced their priorities during the run up to the Agenda’s launch in 2015. Now we need more people to do the same. We need new ways of working together, we need investment bankers to work with environmental activists, religious leaders with feminist organizations, sports leaders with disabled young people.

To spur this development, the UN is strengthening its support to Member States for the implementation of the SDGs around the world. We know that the 2030 Agenda is a bold plan for humanity that requires equally bold changes to the UN development system to ensure that we support countries as effectively as possible. This also means better connecting our efforts across the peace and security, human rights and development pillars of the organization to achieve sustainable development on the ground.