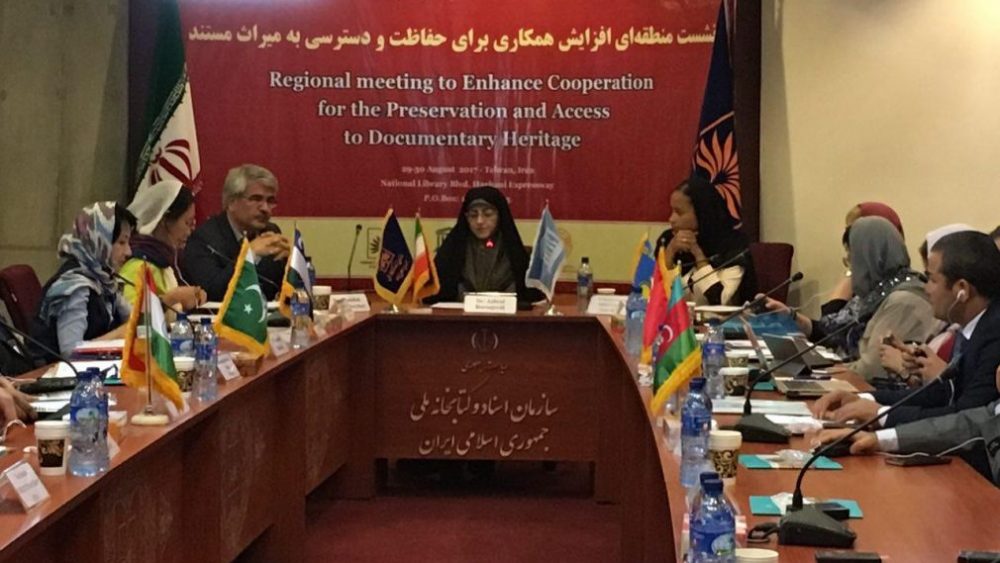 Yesterday morning, a regional meeting on “Enhancing Cooperation for the Preservation of, and Access to, Documentary Heritage” was opened in Tehran. The two-day event, organized by UNESCO, the Iranian National Commission for UNESCO, and the Archives and National Library of Iran, brings together participants from Azerbaijan, India, Iran, Kazakhstan, Pakistan Turkey and Uzbekistan.

The aim of the meeting is to discuss regional cooperation for the preservation and accessibility of documentary heritage through UNESCO’s Memory of the World Programme.

The Memory of the World Program was established in 1992 to preserve, protect and allow access to, all the world’s documentary heritage of most outstanding universal value.

Dr. Ashraf Boroujerdi, Head of the Archives and National Library of Iran, opened the regional meeting by welcoming the international guests and highlighting the importance of safeguarding audio-visual heritage. She talked about Iran’s nine documents inscribed on the Memory of the World Register, including Al-Masaalik Wa Al-Mamaalik – one of the most important geographical books from the 4th century. This item was submitted jointly by Iran and Germany, as an excellent example of global cooperation.

“The Memory of the World Register is not just a list of marvelous documents. It is a vision for peace, embodied in maps, books, photos, films and manuscripts, with the power to change the minds of men and women, to shape a different future for all. The Memory of the World express the great humanist idea that people from all cultures and faiths can unite around common heritage”, said UNESCO Representative, Ms. Kuisch Laroche in her opening remarks. “Extraordinary documentary heritage allows us to renew our understanding, respect and admiration for other cultures. When documentary heritage is destroyed anywhere in the world, we are all diminished.”

Ms. Kuisch Laroche highlighted the importance of regional cooperation for the safeguarding of heritage, at a time when looting, illegal trading, deliberate destruction, inadequate housing and lack of funds, are seriously threatening documentary heritage in many countries.

“Instead of distorting our heritage in endless disputes about what belongs to who, about which heritage is the greatest, the biggest, the oldest…we choose to unite for heritage, because the Memory of the World Programme is not about creating divisions. It is about building common ground. It is not a contest, nor a political dispute. It is a place for expertise and the highest standards of excellence; a platform for dialogue and mutual understanding”, said the UNESCO Representative.

Dr. Nasiri, Secretary-General of the Iranian National Commission for UNESCO, talked about UNESCO’s Recommendations Concerning the Preservation of, and Access to, Documentary Heritage Including in Digital Form, which marked a milestone in UNESCO’s work towards the preservation of documentary heritage.

After the opening speeches, Professor Arid Noshahi from Pakistan, made a presentation about common Persian written heritage in Pakistan. This was followed by presentations by all other participating countries on the challenges and opportunities for preservation and access to documentary heritage.

The meeting will continue until the afternoon of 30 August and conclude with a visit to the museum of the National Library.

For more information about UNESCO’s Memory of the World Programme, please see here.