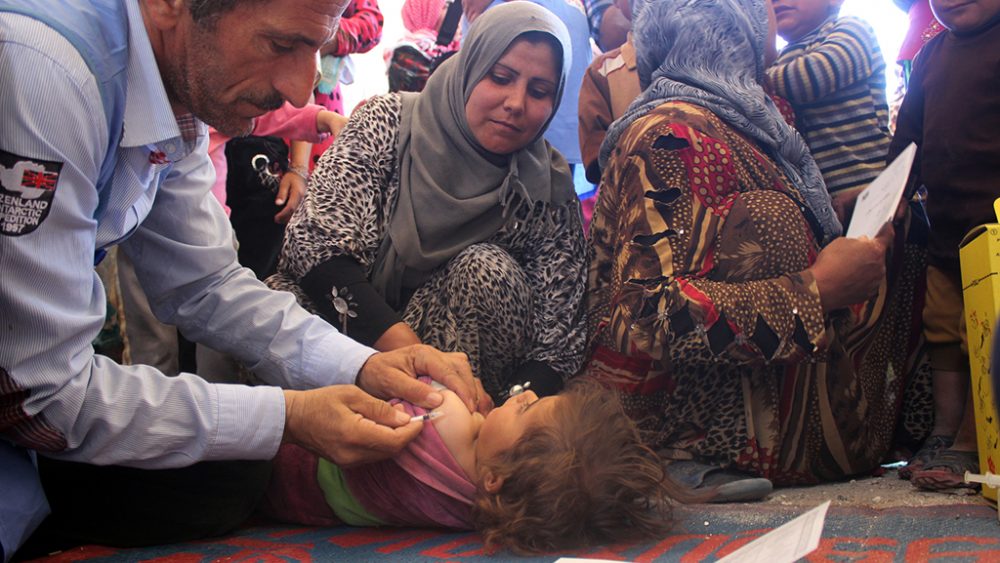 Globally, nearly 13 million infants – almost one in ten – did not receive any vaccinations last year, putting them at serious risk of potentially fatal diseases, the United Nations Children’s Fund (UNICEF) and the World Health Organization (WHO) said, urging greater efforts to extend the reach of health services.

“Every contact with the health system must be seen as an opportunity to immunize,” stressed WHO’s Director of Immunization, Dr. Jean-Marie Okwo-Bele, noting that most of those who remained un-immunized were also the same as the ones missed by health systems. “These children most likely have also not received any of the other basic health services. If we are to raise the bar on global immunization coverage, health services must reach the unreached,” he added.

According to WHO and UNICEF estimates, 6.6 million children received their first dose of diphtheria-tetanus-pertussis (DTP) vaccines but did not complete the full, three dose DTP immunization regimen (DTP3).

Full completion of the vaccination series doses is critical to ensure the highest level of protection against those diseases.

Furthermore, according to the UN agencies, since 2010, the percentage of children who received their full course of routine immunizations has stalled at 86 per cent (116.5 million infants).

Of the estimated 10 million children, in 64 countries out of 194 WHO member States which have not achieved this target, 7.3 million live in fragile situations or in humanitarian emergencies, including countries affected by conflict. Four million of them also live in just three countries – Afghanistan, Nigeria and Pakistan – where access to routine immunization services is critical to achieving and sustaining eradication of diseases such as polio. Similarly, Central African Republic, Chad, Equatorial Guinea, Nigeria, Somalia, South Sudan, Syria and Ukraine recorded less than 50 per cent coverage for DTP3, last year.

In the battle against measles, 85 per cent of children globally received the first dose by their first birthday but only 64 per cent received the second dose.

Additionally, concerted effort is required in the progress against rubella (which can cause hearing impairment, congenital heart defects and blindness and other life-long disabilities), which has seen global coverage increase from 35 per cent in 2010 to 47 per cent last year.

Furthermore, global coverage of more recently-recommended vaccines are yet to reach half the world’s children. These include vaccines against major killers of children such as rotavirus, a disease that causes severe childhood diarrhoea, and pneumonia. Vaccination against both these diseases has the potential to substantially reduce deaths of children under five years of age, a key target of the Sustainable Development Goals (SDGs).

According to WHO-UNICEF data, many middle-income countries still lag behind in the introduction of newer and more expensive vaccines and disparities persist within countries, implying the need for more work to reduce inequalities related to household economic status, mother’s education as well as those living in rural and urban areas in many countries.

Stressing the importance of immunization as one of the most “pro-equity” interventions currently available, Robin Nandy, Chief of Immunizations at UNICEF, stated: “Bringing life-saving vaccines to the poorest communities, women and children must be considered a top priority in all contexts.”

Immunization currently prevents between 2-3 million deaths every year, from diphtheria, tetanus, whooping cough and measles. It is one of the most successful and cost-effective public health interventions.