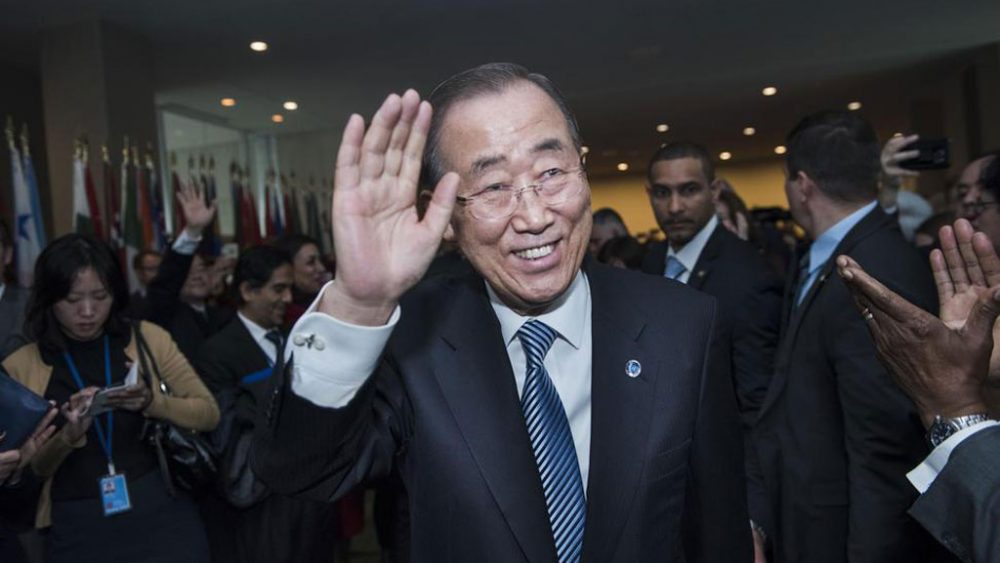 Ban, bidding farewell to staff and delegations at UN Headquarters

Secretary-General Ban Ki-moon said goodbye to staff and Permanent Representatives at United Nations Headquarters in New York, saying that though he had delivered many speeches over his decade in office, he had but two important words for those gathered to wish him well: “thank you.”

Thanking staff and delegations for their “hard work [and] leadership for humanity,” Mr. Ban said that he had been motivated by this commitment and that he was “proud to call you my colleagues.”

Citing sustainable development, climate change, gender empowerment and youth, among the issues that had been at the top of his agenda, he urged the enthusiastic gathering to “keep believing [and] working hard” to achieve the noble goals of the UN, and to be a “voice for the voiceless.”

“It has been a privilege to serve the world’s people. And it has been an honor to serve with you and all our partners – including Member States, civil society, and many more,” he stated.

As Secretary-General Ban Ki-moon wraps up his ten-year leadership at the United Nations, we take a brief look back at his tenure in office. Credit: United Nations

For his last day in office, Mr. Ban will serve as a special guest at the annual New Year’s Eve celebration in Times Square, joining New York City Mayor Bill de Blasio to push the Waterford crystal button and lead the sixty second countdown to the New Year.

Mr. Ban’s last day in office will be the culmination of a decade of service at the helm of the United Nations, during which he sought to mobilize world leaders around a set of new global challenges, from climate change and economic upheaval to pandemics and increasing pressures involving food, energy and water. In addition, he has sought to be a bridge-builder, to give voice to the world’s poorest and most vulnerable people, and to strengthen the Organization itself.

Mr. Ban began his first term as Secretary-General on 1 January 2007, and was unanimously re-elected by the General Assembly to a second term on 21 June 2011.

He will be succeeded on 1 January 2017 by António Guterres, of Portugal, who was formally appointed by the UN General Assembly on 13 October.