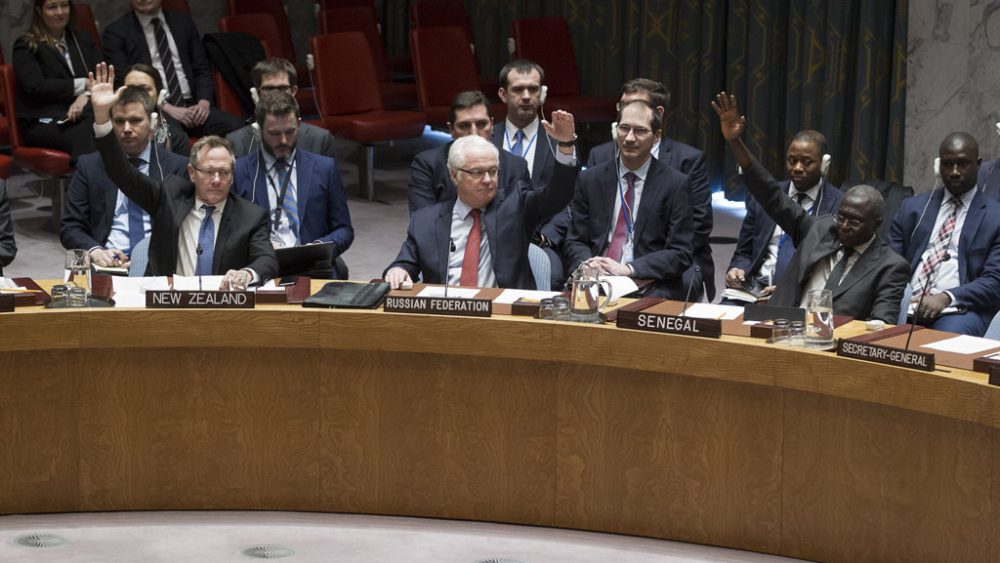 The United Nations Security Council yesterday unanimously adopted a resolution welcoming and supporting the efforts by Russia and Turkey to end violence in Syria and jumpstart a political process for the war-torn Middle Eastern country.

Also in the Russian-drafted resolution, the 15-member Council “takes note of” the documents issued by Russia and Turkey about the agreements the two countries have brokered, including a nationwide ceasefire and a plan to convene political talks in Kazakhstan’s capital, Astana, between the Syrian Government and opposition groups, in January.

The Council “looks forward to” the meeting in Astana, viewing it as “an important part of the Syrian-led political process” and “an important step ahead of the resumption of negotiations under the auspices of the United Nations in Geneva on 8 February 2017.”

Further in the text, the Council stressed the importance of fully implementing all relevant Security Council resolutions, particularly 2254 (2015) and 2268 (2016), which endorsed an inclusive and Syrian-led political process based on the Geneva Communiqué of 30 June 2012 as the only sustainable solution to the current Syrian crisis, now in its sixth year.

The unanimous action by the Council followed its unsuccessful attempts to act on ending the conflict over the last three months.

Secretary-General Ban Ki-moon welcomed the Council’s unanimous adoption and efforts by Russia and Turkey to reduce violence and save civilian lives in Syria through the establishment of a ceasefire, his spokesman said in a statement.

The Secretary-General also takes note of the resolution’s call for the full implementation of resolutions 2254 (2015) and 2268 (2016), and he urges all parties to heed the renewed call in the resolution for rapid, safe and unhindered humanitarian access throughout Syria, the spokesman said.

“The Secretary-General hopes that these developments will lead to productive talks in Astana, Kazakhstan, and contribute to intra-Syrian negotiations to be convened by the United Nations in Geneva on 8 February 2017 and pursuant to resolution 2254,” the spokesman added.

“As the people of Syria continue to suffer immeasurably, it is imperative that the political will demonstrated today translates into increased, sustained and impartial humanitarian access to the millions of people who have suffered far too long and are currently in the grips of a merciless cold winter without adequate shelter, protection and basic supplies,” said Mr. O’Brien, also the Emergency Relief Coordinator, in a statement.