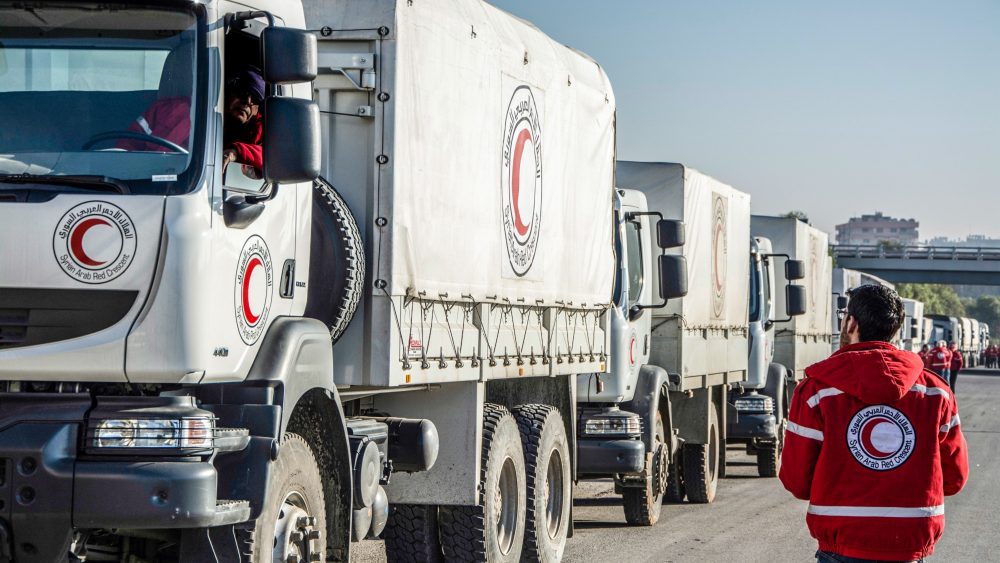 “This convoy has brought extraordinary relief for 60,000 people who are in dire need of food and medical supplies, and have been cut off from humanitarian access for five months,” WFP Syria Country Director Jakob Kern said of the deliveries to Madaya and Zabadani in Rural Damascus and Foaa and Kefraya in Rural Idlib.

WFP sent in 45 trucks carrying food rations and wheat flour as part of a joint UN-SARC convoy, with enough rice, lentils, bulgur wheat, vegetable oil, sugar, salt, beans and chick peas to feed 60,000 people for one month. WFP also delivered to Madaya and Zabadani a three-month supply of specialized nutritious products for the prevention of malnutrition for 250 children.

“Elsewhere in Syria, we are extremely concerned about the more than 250,000 people trapped in eastern Aleppo city who are cut off from food, water, medicine, and other essential supplies,” Mr. Kern said.

“We call on all parties to this terrible conflict to immediately open transport routes that allow unconditional, unimpeded, sustained and safe humanitarian access to those in eastern Aleppo and every family across Syria that needs our support,” he added.

Last week, a convoy reached the besieged area of Moadamiyet al Sham in Rural Damascus for the first time since July, delivering WFP food for 35,000 people for one month, as well as other humanitarian aid.

Across Syria, WFP provides food assistance to more than four million people every month. Thirty per cent of this food is delivered through cross-border, cross-line and air operations to areas that are not reachable through regular road deliveries.

Last month UN Under-Secretary-General for Humanitarian Affairs and Emergency Relief Coordinator Stephen O’Brien called on all parties to immediately lift sieges of civilians in Syria, including Madaya, Deir-ez-Zor, Douma, Foah and Kefraya, to end indiscriminate attacks on civilian-populated areas and civilian infrastructure, and to take all necessary measures to ensure protection for all civilians as required under international humanitarian and human rights law.