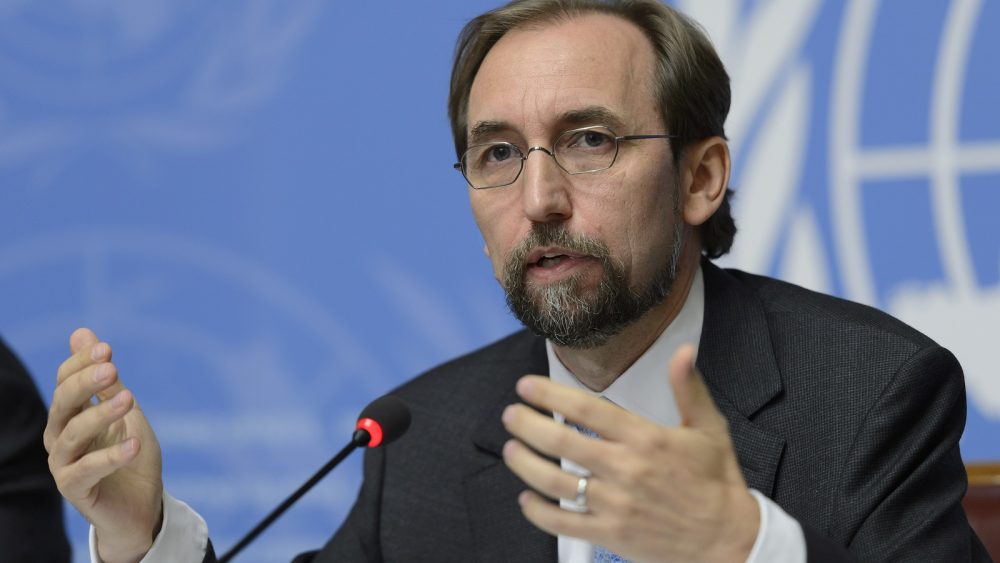 “I am told repeatedly by members of government and Permanent Missions that human rights are being misused as a pretext for interference in the affairs of sovereign nations,” the UN High Commissioner for Human Rights, Zeid Ra’ad Al Hussein, said in an oral update to the Council this morning.

“Statements by my Office regarding credible allegations of violations […] are deemed ‘biased,’ ‘irresponsible,’ ‘misleading’ or based on ‘false’ premises. Monitoring activities, and advocacy intended to help better protect the people of your countries, are refuted as somehow violating the principle of state sovereignty – or even the UN Charter,” he added.

With a mandate from the international community to promote and protect all human rights, the Office of the UN High Commissioner for Human Rights (OHCHR) represents the world’s commitment to universal ideals of human dignity. Its thematic priorities include strengthening international human rights mechanisms; enhancing equality and countering discrimination; and early warning and protection of human rights in situations of conflict, violence and insecurity. It also supports the work of UN human rights mechanisms, including the Human Rights Council.

Taking place at the UN Office in Geneva, the Council’s session will last three weeks and tackle a range of human rights issues currently before the world. These include an interactive dialogue with the Independent International Commission of Inquiry on Syria, as well as an enhanced interactive dialogue on Burundi and a discussion on the integration of a gender perspective, to name but a few.

Emphasizing in his remarks that governments have the responsibility to uphold their human rights obligations and to respect the standards, Mr. Zeid underlined that the human rights of all people, in all countries, also require the collective attention of the international community.

He stressed that human rights violations “will not disappear” if a government blocks access to international observers and then invests in a public relations campaign to offset any unwanted publicity.

“On the contrary, efforts to duck or refuse legitimate scrutiny raise an obvious question: what, precisely, are you hiding from us?” the UN official asked.

He added that if OHCHR is not allowed access by countries, it will assume the worst and yet do its utmost to report as accurately as it can on serious allegations. Such reporting, relying on remote monitoring – using witness testimonies, credible third party reports, satellite imagery and other techniques – would make it more challenging to ascertain the actual situation on the ground as well as make verification and confirmation of competing allegations of any party, including the Government, extremely difficult.

“I regret that imprecision, and encourage all States to assist us to correct it, by permitting my teams unhindered access to events on the ground when requested,” he said.

In his remarks, Mr. Zeid also listed out a number of countries that have not engaged with or permitted access to OHCHR or to independent human rights mechanisms such as special rapporteurs. Independent experts, or special rapporteurs, are appointed by the Human Rights Council to examine and report back on a country situation or a specific human rights theme. The positions are honorary and the experts are not UN staff, nor are they paid for their work.

Interdependence of all human rights

Speaking on the interdependence of all human rights, the High Commissioner underlined that that civil, political, economic, social and cultural rights, as well as the right to development, can only be effective when they are viewed as mutually supportive.

“If States pick and choose which rights they will uphold, the entire structure is undermined,” he said, urging all members of the Human Rights Council to swiftly establish legal frameworks which can ensure implementation and accountability for economic and social rights.

The UN official recalled that the world body was created at a time the world was devastated by two immense wars and, similarly, the entire human rights framework was also a product of great necessity.

He emphasized that the world must remain committed to collective action, as it continues to confronts grave challenges, including terrorism and its main exponent Da’esh (Islamic State of Iraq and the Levant or ISIL), and the alienation and frustration that many people feel due to poor governance and corruption will fuel the work of the deceivers.

“A number of elections will be held in well-established democracies, with dangerous xenophobes and bigots running for office, and what falls to us then could begin to determine, as never before, the future course of ‘we the peoples’ of this earth,” he added.

The UN Human Rights Council is an inter-governmental body within the UN system responsible for strengthening the promotion and protection of human rights around the globe and for addressing situations of human rights violations and make recommendations on them. It was setup by the UN General Assembly in March 2006, and replaced the Commission on Human Rights.

The Council is made up of 47 UN Member States which are elected by the General Assembly.