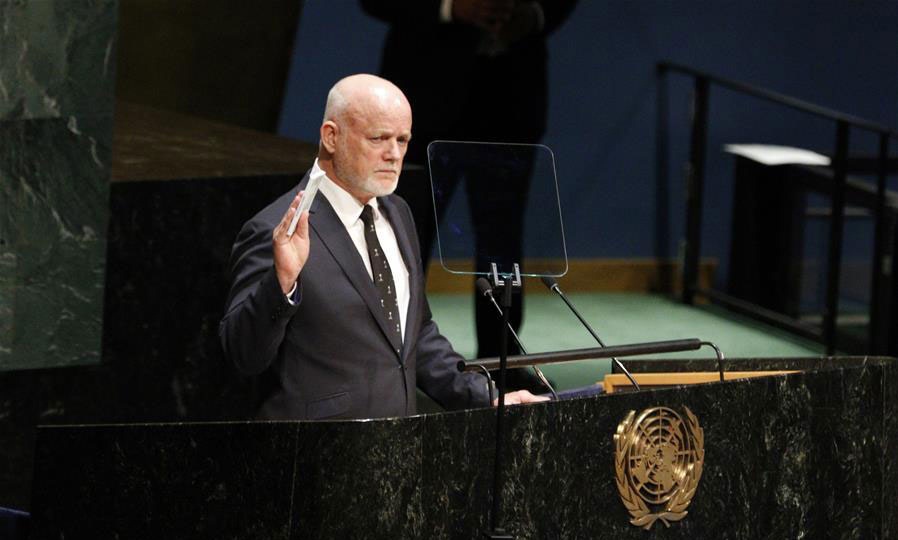 The United Nations General Assembly yesterday opened its 71st session, with an emphasis on ensuring that implementation of the new global development goals, adopted by its 193 Member States last year, is well underway.

“The 70th Session launched the SDGs [Sustainable Development Goals], and for integrity’s sake the 71st must be the year we witness the wheels turning on the implementation of all 17 SDGs,” the President of the General Assembly, Peter Thomson, said as he opened the new session and took an oath of office.

Mr. Thomson, who had had been serving as the Permanent Representative of Fiji to the United Nations until his appointment, said that the theme of the 71st session is ‘The Sustainable Development Goals: A Universal Push to Transform our World.’

On 1 January 2016, the 17 SDGs of the 2030 Agenda for Sustainable Development — adopted by world leaders in September last year – officially came into force. Over the next fifteen years, with the aim of achieving the SDGs, countries will mobilize efforts to end all forms of poverty, fight inequalities and tackle climate change, while ensuring that no one is left behind.

The new Assembly President noted that it had been heartening to observe the sincerity with which governments and national planning agencies around the world have begun integrating the 2030 Agenda into national processes.

“But make no mistake, the great majority of humankind has yet to learn of the Agenda; it has yet to embrace the 17 Sustainable Development Goals, that if successfully implemented will bring an end to poverty and secure a sustainable place for humanity on this planet,” he said.

To fulfill his commitment to achieving meaningful progress in all 17 Goals during the session, Mr. Thomson said he had appointed a team specifically dedicated to the implementation of the SDGs.

This session will be also special, he flagged, in that his office will have the experience of working with two Secretaries-General. The search for the best possible candidate to fill the post is approaching its final stages.

“As President of the Assembly I will dedicate myself to facilitation of the transition process, and will be available at all times to assist the incoming Secretary-General settle into her or his responsibilities of office,” he said.

Mr. Thomson also pledged to work to strengthen the relations between the UN’s organs, continuing the practice of holding regular meetings with the Secretary-General, the Presidents of the Security Council, and the President of the UN Economic and Social Council, and inform the membership as to the scope of these meetings.

He also pledged to maintain financial transparency of his presidency by ensuring that all contributions to the running of his office are entered into a UN trust fund where the donors and expenditure will be public knowledge.

He said his team will strive to find new methods to resolve entrenched conflicts, diminish the atrocities of global terrorism, better manage migrant and refugee flows, and end the many humanitarian crises.

The link between sustainable development, peace and security, and human rights has never been more explicit, he noted, drawing attention to next week’s high-level meeting on large movements of refugees and migrants. “I regret the evidence of widespread lack of empathy for people on the move, many of whom are fleeing from conflict, persecution, or climate change […] It is time to turn down the rhetoric of intolerance and ratchet up a collective response based on our common humanity,” he said.

In the area of peace and security, the Assembly President said the 71st session must build on the review of the Global Counter-Terrorism strategy, including the Secretary-General’s Plan of Action on Violent Extremism, and act on improving the UN architecture to face these threats.

The session must also look to take forward implementation of the ambitious ‘sustaining peace’ agenda, agreed by the General Assembly and Security Council earlier this year, he added, noting that this is an opportunity to bring new coherence and coordination to the UN’s work across peace and security, development, and human rights.

In his remarks, the new General Assembly president also highlighted the issue of UN Security Council reform. “The membership is unanimous in agreeing that reform is necessary to align the Security Council with the realities of the 21st Century,” he said.

During his speech, Mr. Thomson invited to the stage his seven- and five-years-old granddaughters, who, he noted, will be young adults ready to fulfill the potential of their lives in 2030, when the remaining 14 years of the new development agenda have expired.

“What kind of world will we have bequeathed them and all their brothers and sisters around the world, your own grandchildren and children, born and yet to be born?” he asked in an appeal to create a better future for them.

“The 71st session will only be fulfilling,” he said, “if at its end we can be assured real progress is underway on each of the Goals, that our faith and hope in progress is not misplaced, and that a better world will be at hand when the year 2030 rolls around.”

“This first year is crucial. It is a time when all Member States should align their policies, programmes and spending behind the 17 goals,” he said.

He said it is also a time to bring the Paris Agreement on climate change into force, drawing attention to the high-level event he is hosting on 21 September will strengthen momentum for achieving that objective this year.

Mr Ban noted that on 1 January 2017, the 71st session of the Assembly will welcome his successor, the ninth UN Secretary-General. “You will serve as a bridge between my administration and the next […] You will have my full support, and that of my team, in ensuring a seamless transition,” he said.

“The Assembly will be called upon to address many threats, and to show its solidarity with people facing injustice,” he added. “People also look to this body not just to react to problems, but to work proactively and preventively to better the human condition.”

Earlier yesterday, Mr. Ban attended a wreath-laying ceremony commemorating the 55th anniversary of the death of Dag Hammarskjöld, one of his predecessors, at which he renewed his call to the General Assembly to appoint an eminent person or persons to review new information which may exist regarding the circumstances around his death and the loss of 15 others in a plane crash during their mission for peace.

Prior to the opening of the 71st session, the General Assembly held the last meeting of its 70th session, with the outgoing Assembly President, Mogens Lykketoft of Denmark, underscoring the progress made under his leadership, including the adoption of the 2030 Agenda and the Paris Agreement, as well as the holding of the Special Session on the World Drug Problem, and the World Humanitarian Summit.

The General Assembly has discussed the three major UN reviews on peace building and peace operations, and on women, peace and security, he said.

Turning to the election of a new UN Secretary-General, Mr. Lykketoft said: “I am very proud that we broke new ground with unique transparency in the selection process. The two-hour presentation of each of the candidates in the General Assembly dialogues, and their collective Global Townhall debate, were important highlights and helped to include the global public in the debate about the future of the UN. And I hope that transparency proves instrumental in identifying the best possible new Secretary General over the coming months.”

He appealed to the Security Council to also make the remaining process open and engaging to preserve the legitimacy of their recommendation as it feeds into Assembly’s final decision.

“Throughout this session, I sought to instil greater transparency in everything we do – and I am delighted to see that many of the steps I have advanced relating to the integrity, transparency and accountability of my own office have now been codified in the GA Revitalization resolution adopted earlier this morning – and I look forward to witnessing the first ever taking of an oath of office by an incoming President in just a few moments,” he said.