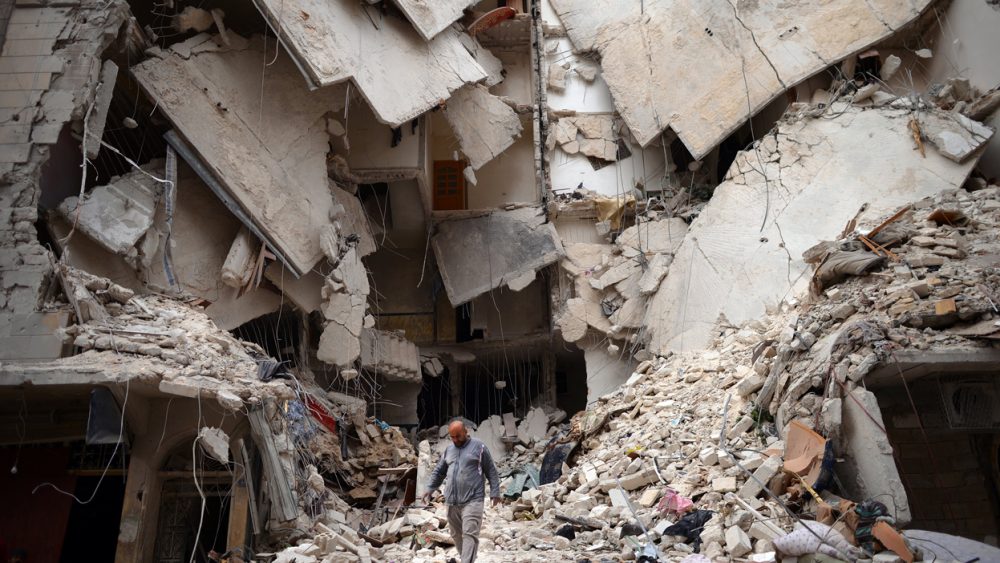 Welcoming a new ceasefire understanding on cessation of hostilities in Syria, announced yesterday at the end of a marathon meeting between senior officials from United States and Russia, United Nations Special Envoy for Syria Staffan De Mistura has said that the UN would do “whatever it can” to support an early restoration of a cessation of hostilities.

“The UN hopes that the political will that led to this understanding is sustained. It creates a real window of opportunity which all relevant actors in the region and beyond should seize to put the crisis in Syria on a different path and ease the violence and suffering being endured by the Syrian people,” said Mr. De Mistura, in a statement issued yesterday.

Speaking at the end of the meeting between US’ Secretary of State John Kerry and Russia’s Foreign Minister Sergey Lavrov, Mr. De Mistura called on all parties to the conflict in Syria to facilitate humanitarian access in besieged and hard-to-reach areas.

The UN Special Envoy also welcomed the fact that the Russian Federation and the United States are prepared to work together to defeat Daesh and Al Nusra front.

Earlier, Mr. De Mistura had expressed hope that an agreement between Russia and the US could make a major difference in ensuring cessation of hostilities, and in moving forward the political process – both considered necessary to ease humanitarian suffering and to end the conflict in Syria.

Mr. De Mistura had made the statement at a press conference in Geneva after coming out of the meeting of the International Syria Support Group’s Humanitarian Access Task Force, co-chaired by Mr. Kerry and Mr. Lavrov.

He had also expressed concern for the plight of civilians trapped in Syria’s eastern Aleppo, saying it was greater than ever. He said it was a priority that the two super-powers agree on a way to halt the fighting, so that aid can get through to civilians caught up in the more than five-year conflict.

Speaking shortly after Mr. De Mistura, UN humanitarian chief, Stephen O’Brien said it was imperative that a way forward was found to meet the humanitarian needs of Syrians in what he described as “a man-made humanitarian crisis.”

“We have to now see our way forward to try and meet the needs; the incredibly large-scale, deep, long-term needs of human suffering brought about by the continuing conflict circumstances,” said Mr. O’Brien.

He stressed the demands of humanitarian partners, “under the humanitarian principles of impartiality, independence, and neutrality,” adding that the UN, and its implementing humanitarian partners “are ready to be able to deliver for the people who have life-saving, life-supporting and protection needs and continue to suffer under the current circumstances.”

“So the readiness of the UN was affirmed, the detailed plans are in place, with just the usual short-term notice of getting a green light, and then the reality of having trucks getting loaded, and making sure that the truck drivers feel safe enough to be able to get into their cabs and drive along secure routes to deliver to the people in need was affirmed,” said Mr. O’Brien.

Mr. O’Brien also said he hoped their readiness to deliver humanitarian assistance will not be affected by the coming solemn religious holidays of Eid. “Of course some adjustments will have to be made,” he said, while noting that they “would make sure that the readiness was equally in place during the Eid holidays, and certain arrangements are made for people to be able to make their proper celebration of that period.”

Mr. O’Brien said it was also clear from the Humanitarian Task Force meeting, and from all the briefings, that the humanitarian situation in Syria has reached a new critical phase.

“It was absolutely clear that the needs of the people in Syria, wherever these needs arise, however they arise, whoever it affects, on whichever side of any line, or none at all, have become even more severe,” stressed Mr. O’Brien.

Those needs, he noted, “were not only over the five years, but actually even in the last three weeks, and therefore the hope and wish for a comprehensive approach to the fight in Syria that would enable us to have the total humanitarian access was the paramount and necessary conditions that we need to get access.”

He cited the situation in eastern Aleppo, which he said “remains extremely severe, to the point of it being de facto besiegement.”

Statistics on the situation in Syria are staggering. According to the Syria Regional Refugee Response portal, the UN High Commissioner for Refugees (UNHCR) has registered some 4.8 million Syrian refugees to date – with Turkey hosting the largest population of 2.7 million people; Lebanon, 1,033,513; and Jordan an additional 655,990 individuals. The Office for the Coordination of Humanitarian Affairs (OCHA) reflected that the violence within the country has displaced 6.1 million people internally and left some 13.5 million people in need of humanitarian assistance.

The taskforces for humanitarian aid and a cessation of hostilities, created by the International Syria Support Group (ISSG) which comprises the UN, the Arab League, the European Union and 16 other countries, have been meeting separately since early this year on a way forward on the Syrian crisis.