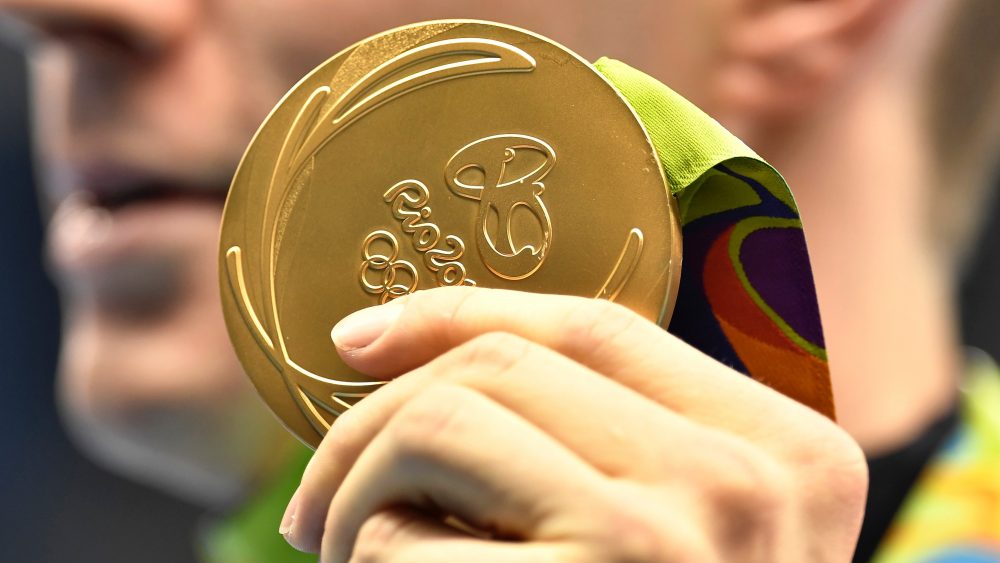 What the Olympic medal tally tells us about developing countries

All the goals have been scored, finish lines crossed and champions crowned. The 2016 Rio de Janeiro Olympics are officially in the books. The gaze of the sporting world now shifts to Tokyo, host of the 2020 Games, but not without first fixating on the final medal count from Rio de Janeiro.

The official medal tally offers sports fans, statisticians, geopolitical strategists, fortune tellers and number crunchers alike a quadrennial opportunity to dive into a rich set of data to analyze the fate and fortune of nations based on their athletic achievements. Which countries exceeded expectations? How does economic growth affect a country’s gold medal count? Did Asian countries outperform South American ones? No matter how you slice it, there’s always something to be read into the number of gold, silver and bronze a country takes home.

The development community can also find plenty of food for thought in the medals race. The beauty of an international event such as the Olympics is that it convenes countries from all rungs of the development ladder, allowing states that don’t typically compete head-to-head in global commerce and trade to do so on the field, in the pool and on the track.

We’ve done some light numbers crunching to see how countries of the “global north” and “global south” fared against each other — and whether there are any big surprises.

Not surprisingly, industrialized countries led by the United States dominated the final medal count. Team USA, with 121 medals, nearly doubled the next closest countries in both total medals — China — and gold medals — Great Britain. All members of the Group of Eight cohort of industrialized nations finished among the top 10 medal winners in Rio de Janeiro. The other two to do so were fellow rich country Australia and China, the world’s second largest economy.

But how much did countries “spend” on those medals, relative to the average wealth of their citizens? If Olympic medals were assigned an economic value, what does it cost each country to amass them?

When measuring a country’s Olympic medal count by a portion of its national output, a different picture emerges. Here we find that developing countries are actually more “efficient” in generating medals than industrialized ones. It cost Kenya, Ethiopia, North Korea and Uzbekistan, for example, much less in economic terms to produce medals than any G-8 country. Meanwhile, much more prosperous Austria, Switzerland, Norway and Finland are all somewhat inefficient medal winners — it cost them much more in terms of individual economic output to produce Olympic medals than Kosovo, the Philippines and Mongolia.

The methodology used to reach this conclusion is neither a perfect science nor the only way to size up how developing countries performed against industrialized ones.

First, we did not differentiate between gold, silver and bronze medals. All metallic alloys and elements were considered equal for the purpose of this exercise.

We also did not include every single medal-winning country in the analysis.

To draw the starkest comparison between the global north and south, we grouped the medal winners into two categories — countries that are part of the Organization for Economic Cooperation and Development and countries officially classified by the World Bank as either low income or lower middle income. That left out a chunk of emerging markets who fared well in the medal count such as Colombia, South Africa and host country Brazil. It also excluded some medal-winning countries that are typically considered to be developing, but officially classified by the World Bank as upper-middle-income — Jamaica, Cuba and Thailand, to name a few.

Here is the breakdown of the OECD’s total medal count: 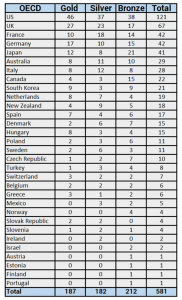 And for developing countries: 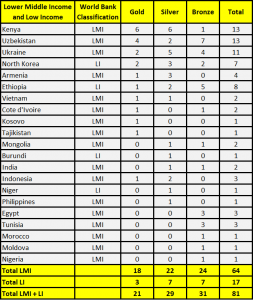 Clearly, OECD countries dominated. Even if the top 10 medal winners were not included, OECD countries would have still nearly doubled the medal count of developing nations.

But to determine the economic cost of a country’s medals, we took it a step further.

Gross domestic product, remember, is the total value of goods and services that a country produces. Per capita GDP is therefore the value of a country’s output divided by its population. Among the many things it represents, per capita GDP is an approximate gauge of the level of individual economic output for a given country.

We used data from the U.S. Central Intelligence Agency to determine the 2014 per capita GDPs of all 50 countries. The data is calculated on a purchasing power parity basis and expressed in U.S. dollars to make for an even comparison across countries.

If we then divide a country’s per capita GDP by its medal count, we arrive at roughly the level of individual output required in a given country to produce one Olympic medal.

The chart below groups all countries together and orders them by that measure of economic cost, seen in the column on the right.

To give an example of how to read this, look at Kenya, listed first on the chart. The country has a per capita GDP of $1,800. If we divide $1,800 by the 13 medals it collected in Rio de Janeiro, the result tells us that it required $138 of individual economic output to produce one Olympic medal. Put another way, an Olympic medal in Kenya is about equal to $138 of an individual’s productivity.

Conversely, Austria, at the very bottom of the chart, has a per capita GDP of $42,600. If we divide the $42,600 of individual economic output by the country’s lone medal, we can say it took the full $42,600 of economic activity to produce one Olympic medal.

So what exactly does this mean? One way to interpret this statistic is in terms of economic efficiency. The better a country is at producing something — wine, cars, microchips — the cheaper it becomes for them. In this case, the item being “produced” is Olympic medals and developing countries tend to produce them at lower costs.

If Austria were as efficient in producing Olympic medals as Kenya then it would have collected 309 medals in Rio de Janeiro — Austria’s per capita GDP of $42,600 divided by the $138 of activity it takes for Kenya to produce an Olympic medal.

Compared to the total medal count that favors OECD countries, looking at the medal winners from an angle of economic efficiency casts developing countries under a much more impressive light.

The clear outliers are Ethiopia and North Korea. Both are classified as low income countries and rank second and third, respectively, in medal efficiency. North Korea is one of the most closed economies in the world and its citizens are chronically malnourished. But it produced Olympic medals at a more efficient clip than both the U.S. and U.K.

On the other end, there is much room for improvement among OECD countries. The bottom eight countries in medal efficiency are all part of the rich country club. Austria, Finland, Portugal and Estonia all required the equivalent of the average citizen’s entire economic output to produce an Olympic medal at the Rio de Janeiro Games.

Of course, this should all be taken with a heap of salt. This exercise is not to suggest that those countries are applying their economic productivity to the achievement of Olympic medals. Ranking a country by its efficiency in winning medals is probably more of a thought exercise than an indicator of achievement or development. But this does offer a glimpse into how some developing countries are making the most of limited resources compared to richer ones on the field of play.

There are a number of other insights that can be read into the Olympic medal count and important questions that the quadrennial tally raises about countries. For starters, now that we’ve teased out the idea of medal efficiency, is there any significant correlation between per capita GDP and medals accumulation? What do else do countries that have similar medal efficiencies have in common? And, of course, what are the economic and population determinants of medal success, if there are any?