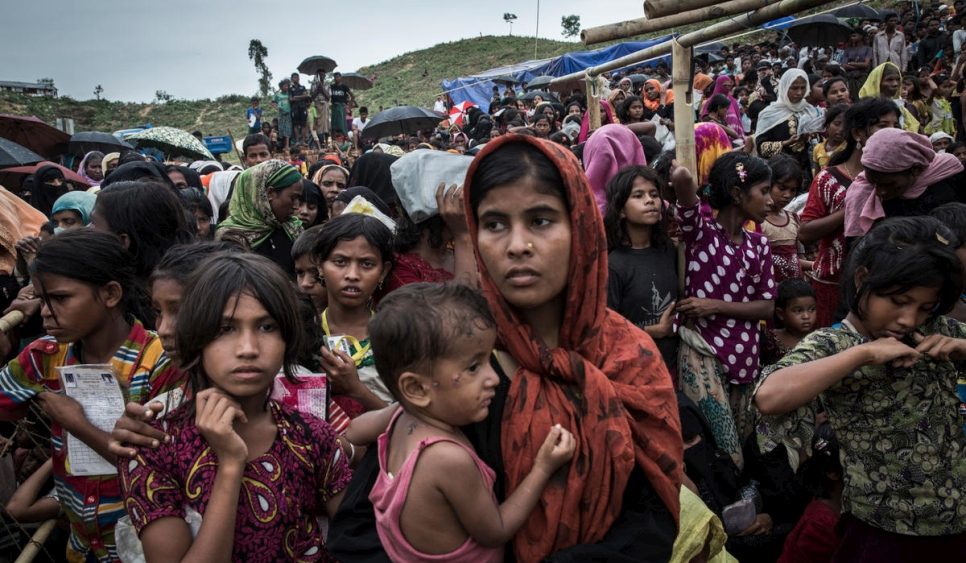 It’s been five years since more than 700,000 ethnic Rohingya fled from Myanmar to Bangladesh to escape a brutal military crackdown. The UN chief on Thursday called on the international community to find “comprehensive, durable and inclusive solutions” to help end their plight.

Some one million refugees remain in the vast camps of Cox’s Bazar, without any immediate prospect of being able to return home, which more than 150,000 mostly-Muslim Rohingya are still “confined in camps” in their native Rakhine state, said a statement issued on behalf of UN Secretary-General António Guterres.

And following the military coup of February 2021, the humanitarian, human rights and security situation in Myanmar itself, has rapidly deteriorated, making conditions even less conducive to refugees’ return.

“The Secretary-General notes the unflagging aspirations for an inclusive future among the country’s many ethnic, and religious groups and underlines that the full and effective participation of the Rohingya people is an inherent part of a Myanmar-led solution to the crisis”, the statement said.

“Greater humanitarian and development access for the United Nations and its partners to affected areas is crucial.  Perpetrators of all international crimes committed in Myanmar should be held accountable. Justice for victims will contribute to a sustainable and inclusive political future for the country and its people.”

Speaking in Geneva, the UN High Commissioner for Human Rights (OHCHR), Michelle Bachelet, said that Myanmar’s Tatmadaw forces had maintained and even escalated operations against civilians in residential areas in southeast, northwest and central regions, 18 months since they overthrew the democratically-elected overnment.

The use of air power and artillery against villages and residential areas has “intensified”, the UN human rights chief said, while also warning that recent spikes of violence in Rakhine – the historic former home of ethnic Rohingya – could upset the relative calm in the region, and that the last fairly stable area of the country may not avoid a resurgence of armed conflict.

Rohingya communities have frequently been caught between the Tatmadaw and rebel Arakan Army fighters or have been targeted directly in operations. Over 14 million need humanitarian assistance.

UN Special Envoy of the Secretary-General on Myanmar, Noeleen Heyzer, said during her four-day mission to Bangladesh to highlight the poignant anniversary, that “we cannot let this become a forgotten crisis”.

In what were described as “productive discussions”, she thanked Bangladeshi Prime Minister Sheikh Hasina for her leadership and expressed the UN’s deep appreciation to the people and Government of Bangladesh for their immense contribution.

“The generosity of Bangladesh and host communities towards Rohingya refugees in their time of need conveys a critical need for greater international and regional commitment to burden share and ensure that the Rohingya do not become forgotten,” Special Envoy Heyzer said.

“I will continue to advocate for greater leadership of countries in the region in supporting Bangladesh and leveraging their influence with Myanmar to create conducive conditions for the voluntary, safe and dignified return of refugees.”

She stressed that Rohingya people continue to undertake perilous land and sea journeys that expose them to criminal exploitation including human trafficking and gender-based violence, and emphasized that it was ultimately Myanmar’s responsibility to establish conducive conditions for the voluntary, safe, dignified and sustainable return to Myanmar of all refugees and those forcibly displaced.

The UN Special Representative on Sexual Violence in Conflict, Pramilla Patten, also urged greater international action, and for countries to stand in solidarity with the Rohingya survivors of grave international crimes to ensure access to justice and redress, which is foundational for recovery and peace.”

“In 2017 and 2018 during my visits to the refugee camps in Cox’s Bazar, I had witnessed firsthand the visible scars on women and girls from the sexual violence they endured. All of the women I spoke with said they wanted to see the perpetrators punished. They all – without exception – demanded justice”, she added.

Since 2010, the annual reports of the Secretary-General on conflict-related sexual violence have documented patterns of sexual violence crimes perpetrated against the Rohingya, and in 2019 the Independent International Fact-Finding Mission on Myanmar (IIMM) concluded that “rape and sexual violence are part of a deliberate strategy to intimidate, terrorize or punish a civilian population, and are used as a tactic of war” – one of the hallmarks of the military operations conducted by the Tatmadaw.

She said momentum was growing in Myanmar for leaders to recognize the Rohingya as an ethnic nationality, entitled to citizenship and other collective and individual rights, and to ensure accountability and reparations. This encouraging shift means no more that the people of Myanmar are confronting history and are willing to work towards lasting solutions to build peace and reconciliation.

“We must heed the call of the people of Myanmar and work collectively towards ensuring justice which has been delayed for far too long. I reiterate my call for enhanced efforts by the international community to continue supporting the dignity and well-being of the Rohingya community and to ensure that perpetrators will be held accountable and that survivors will have effective access to reparations and redress. I call for the collective search of lasting solutions for one of the most persecuted people on earth.”, the Special Representative concluded.