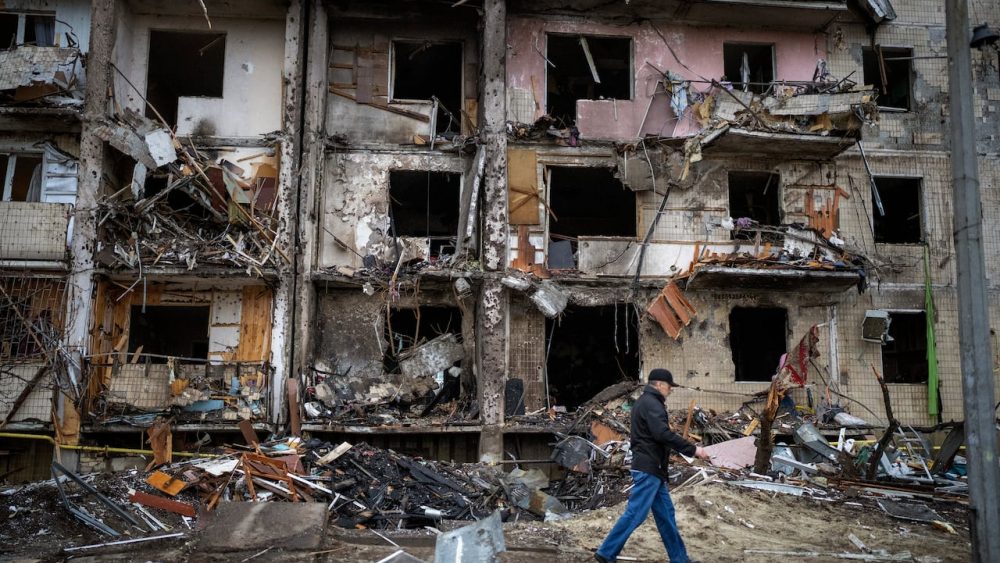 The UN Secretary-General appealed for an immediate humanitarian ceasefire in Ukraine on Monday, so that “serious political negotiations” can advance towards a peace agreement, based on the principles of the United Nations Charter.

“A cessation of hostilities will allow essential humanitarian aid to be delivered and enable civilians to move around safely. It will save lives, prevent suffering, and protect civilians”, said António Guterres, speaking to reporters outside the Security Council in New York, as Russia’s assault and bombardment of Ukrainian towns and cities continues.

“I hope a ceasefire will also help to address the global consequences of this war, which risk compounding the deep hunger crisis in many developing countries that already lack fiscal space to invest in their recovery from the pandemic, and now face soaring food and energy costs”, he added.

Nuclear weapons use ‘must be avoided’

Responding to questions from correspondents after his statement, the UN chief said that in relation to the possibility of any use of nuclear weapons by Russia, or any bio-chemical weapons use relating to the war in Ukraine. “That would be something that, I believe, will be avoided – it must be avoided.”

Mr. Guterres said that the UN Humanitarian Affairs chief, Martin Griffiths, would “immediately explore” an agreement with Russia and Ukraine for the ceasefire, and the UN chief added that he was in “close contact” with other countries in the hope of involving Russia in meaningful negotiations, including Turkey, Qatar, Israel, India, China, France and Germany.

Since the beginning of the Russian invasion one month ago, the war has led to the senseless loss of thousands of lives; the displacement of ten million people, mainly women and children; the systematic destruction of essential infrastructure; and skyrocketing food and energy prices worldwide”, said the UN chief.

UN ‘doing everything in it’s power’

This must stop”, he added, declaring that the UN is “doing everything in its power to support people whose lives have been overturned by the war.”

In the past month, beyond support to refugee hosting countries, the UN’s humanitarian agencies and partners have reached nearly 900,000 people, mainly in eastern Ukraine, with food, shelter, blankets, medicine, bottled water, and hygiene supplies, he said.

The World Food Programme (WFP) and partners reached 800,000 people in the past month and are scaling up to reach 1.2 million by the middle of next month, said Mr. Guterres.

The World Health Organisation (WHO) and partners have reached more than 500,000 people in the most vulnerable areas with emergency health, trauma and surgery kits, he added.

“Just today, a convoy of trucks brought food, medical and other relief supplies from WFP, WHO, UNHCR, UNICEF to Kharkiv, to be delivered by our national partners to thousands of people in hard-hit areas”, he said.

“Our agencies and partners are procuring vital supplies and setting up pipelines for delivery throughout Ukraine in the coming weeks.”

But the UN chief made it clear that any solution “to this humanitarian tragedy is not humanitarian. It is political”, making a strong appeal to the parties to the conflict, and to the international community overall, “to work with us for peace in solidarity with the people of Ukraine and across the world.”

In a statement issued later in the day by the UN Humanitarian Coordinator for Ukraine, Osnat Lubrani, she gave further details of Monday’s UN aid shipment to the besieged and decimated city of Kharkiv, in northeastern Ukraine, which is close to the Russian border.

“Today we were able to safely bring food rations, medical supplies and household items to Kharkiv for thousands…Thanks to our national partner the Ukrainian Red Cross, these supplies will be delivered to the most vulnerable communities…as well as hard-to-reach areas like Izium, Balakliia and Chuhuiv.

“We rely on the humanitarian notification system with Ukraine and the Russian Federation, facilitated by the Office for the Coordination of Humanitarian Affairs (OCHA), to ensure our safe access”, she added, making clear that it was impossible to deliver aid, “when the shelling continues, and roads are mined.”

“Pauses in the fighting are needed to allow free, safe passage for people to leave in whichever direction they choose”. She said, calling for “the continued cooperation of all parties to protect civilians and humanitarian supplies and personnel.”

On Monday, the UN Children’s Fund (UNICEF) said that it has already sent more than 1,000 tonnes of emergency supplies to Ukraine.

The agency is also launching an urgently-needed cash transfer programme to support 52,000 of the most vulnerable families with children.

And amid ongoing concerns over trafficking and abuse of unaccompanied minors, more and more safe spaces for refugee children and women – known as Blue Dots – are being set up in Ukraine’s neighbouring countries.

UNICEF said that its emergency supplies sent to Ukraine will address the needs of over eight million people – including two million children.

In Ukraine’s east, in Luhansk and Donetsk, UNICEF said that 4,000 people sheltering in bunkers have received psychosocial support through online, face-to-face consultation and via telephone since Russian troops entered the country on 24 February.