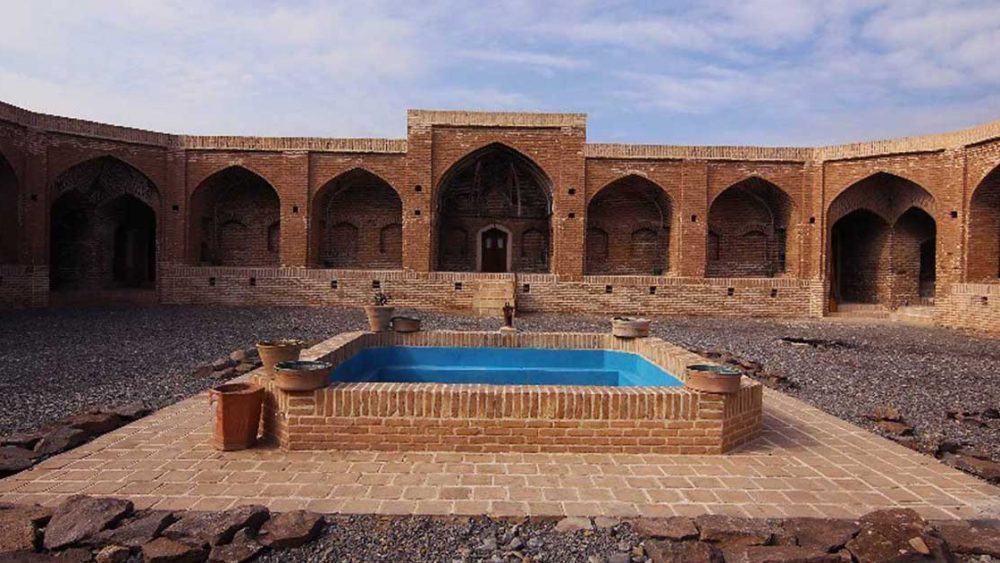 Restoration work has commenced on Sadrabad caravanserai to turn the 19th-century inn into a tourism destination.

Located in Mohammadabad village of Qom province, the two-storey caravanserai has two courtyards and six watchtowers, the provincial tourism chief said on Monday.

Worn-out bricks, cracks, rooftops, as well as interior and exterior walls, are subject to the restoration work, Alireza Arjmandi said.

The mud-brick caravanserai has been registered as a national cultural heritage under the number 1668.

Iran has recently submitted an inclusive dossier on its caravanserais to the United Nations Educational, Scientific, and Cultural Organization. The dossier comprises the obligatory data about a selection of 56 caravanserais, which are scattered across the ancient land. And the shortlist includes qualified caravanserais located in at least 24 provinces.

Caravanserai is a compound word combining “caravan” with “sara”; the former stands for a group of travelers and the latter means the building. They often had massive portals supported by elevated load-bearing walls. Guest rooms were constructed around the courtyard and stables behind them with doors in the corners of the yard.

Iran’s earliest caravanserais were built during the Achaemenid era (550 -330 BC). Centuries later, when Shah Abbas I assumed power from 1588 – to 1629, he ordered the construction of network caravanserais across the country.

A time travel to forgotten ages

For many travelers to Iran, staying in or even visiting a centuries-old caravanserai, can be a wide experience; they have an opportunity to feel the past, a time travel back into a forgotten age.

Such roadside inns were once constructed along ancient caravan routes in the Muslim world to shelter people, their goods, and animals. The former Silk Roads may be the most famous example dotted by caravanserais.

Cozy chambers that are meticulously laid out around a vast courtyard may easily evoke spirits of the past. It’s not hard to fancy the hustle and bustle of merchants bargaining on prices, recounting their arduous journeys to one another while their camels chewing hay! You can also conceive the idea of local architectural style and material in its heyday.

It’s not hard to fancy the hustle and bustle of merchants bargaining on prices, recounting their arduous journeys to one another while their camels chewing hay!

Passing major roads in the country, one may see crumbling caravanserais many of which were abandoned for ages. In the Information Age, such guest houses have largely lost their actual usage.

However, a couple of years ago, the Iran tourism ministry introduced a scheme to keep them alive and profitable; tens of caravanserais are ceded to the private investors for better maintenance. Now, some are exclusively renovated, repurposed into boutique hotels and tourist lodgings.

They often had massive portals supported by elevated load-bearing walls. Guest rooms were constructed around the courtyard and stables behind them with doors in the corners of the yard.