United Nations Association of Iran / News / UN chief: Global vaccination plan is ‘only way out’ of the pandemic
Nov 30 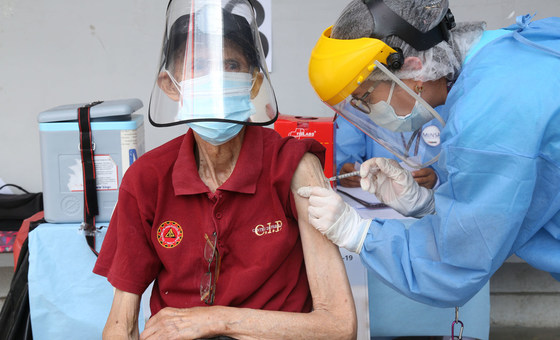 UN chief: Global vaccination plan is ‘only way out’ of the pandemic

With more people dying due to COVID-19 this year than in 2020, the UN Secretary-General argued on Tuesday that “the only way out of a global pandemic – and out of this unjust and immoral situation – is through a global vaccination plan.”

António Guterres was speaking at a meeting in New York of Foreign Ministers of the Group of 77 developing nations (G77) and China, where he noted that the pandemic continues to wreak havoc on developed and developing countries alike.

He said that the UN stands behind the vaccination strategy set out by the World Health Organization (WHO), with the goal of getting vaccines into the arms of 40 per cent of people in all countries by the end of this year, and 70 per cent by the middle of 2022.

“Everyone, everywhere, must have access to COVID-19 vaccines, tests and treatment”, the Secretary-General said, asking for support for the ACT-accelerator and the COVAX facility.

Mr. Guterres also warned that the world economy is projected to grow by 5.9 per cent this year, but the pace of recovery is extremely uneven.

In Sub-Saharan Africa, for example, the International Monetary Fund (IMF) projects that cumulative economic growth per capita over the next five years will be 75 per cent less than the rest of the world.

“This dangerous divergence threatens to widen as growth rates are expected to decrease in 2022. Rising inflation could also have a negative impact on the cost of borrowing and servicing debt”, he warned.

The UN chief also addressed the climate crisis, unsustainable levels of inequality, and the development of new technologies, asking for “a quantum leap in unity and solidarity to make collective decisions” on these global challenges.

On multilateralism and the importance of the United Nations, the Secretary-General stressed the role of the Organization during the pandemic.

For Mr. Guterres, it was recent reforms that enabled the Organization to adjust and respond quickly.

“As a result, more than 90 per cent of host governments have indicated that the United Nations today is more relevant to their country’s development needs when compared to three years ago”, he concluded.