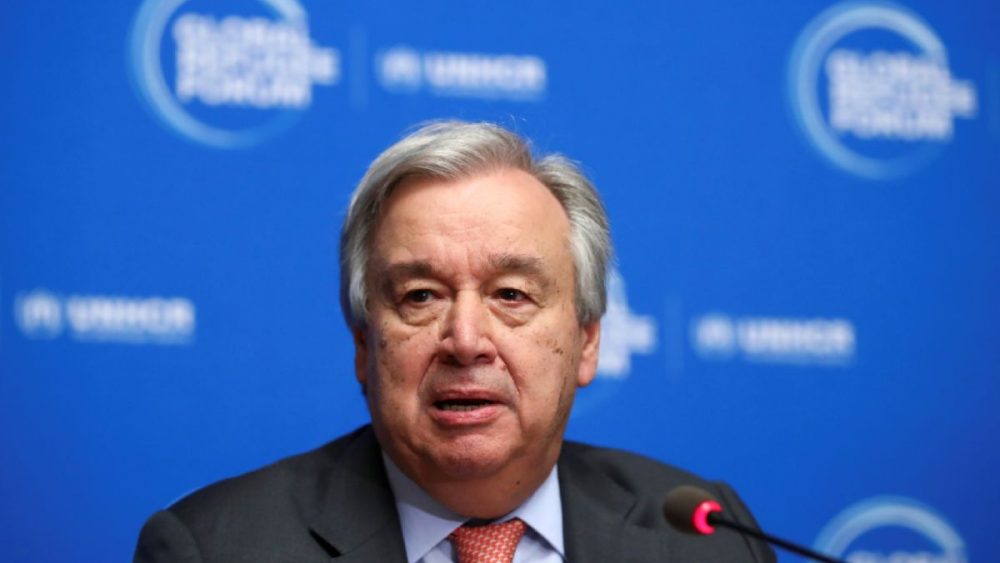 António Guterres secures the second term as UN Secretary-General, calls for a new era of ‘solidarity and equality’

António Guterres was on Friday re-appointed to a second term as UN Secretary-General, pledging as his priority, to continue helping the world chart a course out of the COVID-19 pandemic.

Taking the oath of office in the General Assembly Hall, Mr. Guterres said he was aware of the immense responsibilities bestowed on him at this critical moment in history.

World at a crossroads

“We are truly at a crossroads, with consequential choices before us. Paradigms are shifting. Old orthodoxies are being flipped,” he told ambassadors.

“We are writing our own history with the choices we make right now. It can go either way: breakdown and perpetual crisis or breakthrough and prospect of a greener, safer and better future for all. There are reasons to be hopeful.”

Mr. Guterres was the sole candidate from the UN’s 193 Member States to vie for its top job.  His first five-year term began in January 2017.

He was nominated by his homeland, Portugal, and appointed by acclamation by the General Assembly, following prior endorsement by the UN Security Council, for a second term that runs from January 2022 to December 2026.

Speaking in a mix of English, French and Spanish – three of the UN’s six official languages – Mr. Guterres detailed how COVID-19 has taken lives and livelihoods, while exposing inequalities.  At the same time, countries are confronting challenges such as climate change and biodiversity loss.

He stated it was crucial that the way out of the pandemic, as well as socio-economic recovery, should occur on a much more equitable basis, going forward.

“Our greatest challenge – which is at the same time our greatest opportunity – is to use this crisis to turn the tide, pivot towards a world that learns lessons, promotes a just, green and sustainable recovery and shows the way via increased and effective international cooperation to address global issues”, he said in French.

With the way forward filled with colossal tasks, the Secretary-General expressed confidence that they can be completed successfully, partly due to the incredible commitment of UN staff across the world, though underlining the need for continuous improvement, including through better data and analysis, and a reduction in “unnecessary bureaucracy”.

Although the world has changed a lot, the UN’s promises remain constant, but countries have to work together in entirely new ways to keep them alive.

He called for seizing momentum for transformation, while also stressing the need to bring other voices to the table, including civil society, the private sector and youth.

“Ultimately, this transformation has to do with solidarity and equality”, Mr. Guterres said, this time speaking in Spanish.

“But equity needs to start now: vaccines need to be available for everyone everywhere and we must create the conditions for sustainable and inclusive recovery both in the developed and developing world.  And there is still a long way to go.”

Mr. Guterres warned that countries must overcome their current “trust deficit” if this is to be achieved.

“In particular, we need to do everything we can to overcome current geostrategic divides and dysfunctional power relations. There are too many asymmetries and paradoxes. They need to be addressed head-on,” he advised.

“We also need to be aware of how power plays out in today’s world when it comes to the distribution of resources and technology.”

Mr. Guterres vowed to use his second term to work towards ensuring “the blossoming of trust between and among nations” and to engage in confidence building.

He will also seek to inspire hope that things can be turned around, or that the impossible might be made possible.

“The attitude is never to give up,” he said.  “This is not idealistic or utopian but grounded in knowledge of history when big transformations occurred and guided by the fundamental belief in the inherent goodness of people.  That breakthroughs are possible when we expect it the least and against all odds. That is my unwavering commitment.”