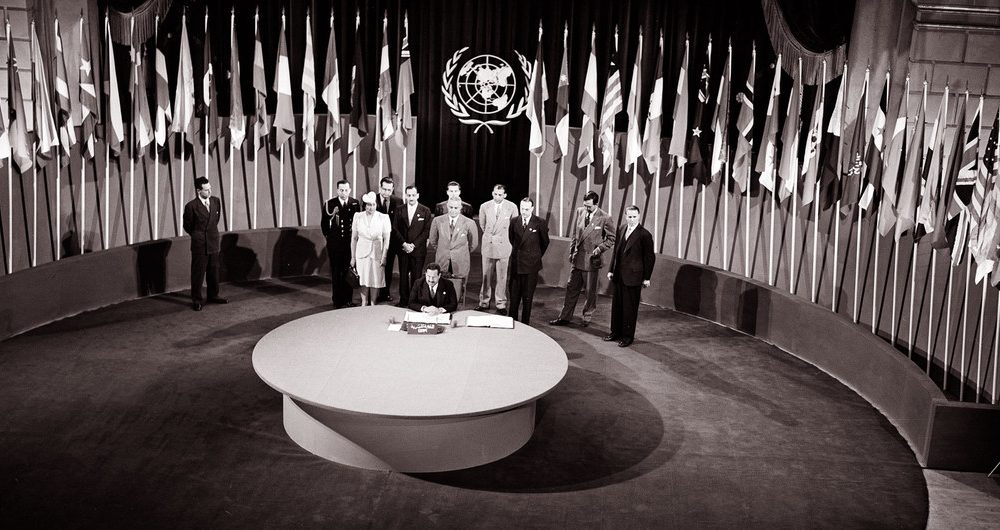 The UN Charter “brought rules and hope to a world in ruins”, Secretary-General António Guterres told a virtual ceremony on Friday, commemorating 75 years since the Organization’s foundational text was signed.

Adopted by Member States as the Second World War was coming to a close, the UN chief noted that the world today was marking the milestone anniversary “as global pressures are spiraling up”.

Conceived above all as a means to save future generations from the scourge of war, the Charter calls for the Organization to maintain international peace and security; promote social progress and better standards of life; strengthen international law, and promote human rights.

“The Charter’s vision stands the test of time and its values will continue to carry us forward”, said the UN chief. “It remains our touchstone for a world mired in a pandemic, torn by discrimination, endangered by climate change and scarred by poverty, inequality, and war”.

Against a backdrop of a global reckoning with racism, environmental degradation, increasing cyberattacks, nuclear proliferation, corruption and pushback on basic human rights, he noted that back in 1945, the delegates in San Francisco – who had also lived through a global pandemic, depression, and war – “seized their opportunity to plant the seeds of something better and new”.

“Today, we must do the same”, said the top UN official. “To achieve that watershed moment, we need to reimagine multilateralism, give it teeth to function as the founders intended, and ensure that effective global governance is a reality when it is needed”.

And inclusive multilateralism today also requires the “essential voices” of civil society, cities, the private sector, and young people to shape the world we want.

Yet there is also “much to encourage us and drive us onward”, he said, such as the general level of solidarity shown in responding to the pandemic, the embracing of the Sustainable Development Goals (SDGs), and the recent activism of racial justice protesters and others, towards advancing equality, climate action, and a green economy.

Paying tribute to the service and sacrifice of peacekeepers, staff, and others who gave their lives advancing UN values, Mr. Guterres said: “I am inspired by so much that has been built and achieved across 75 years”.

“Now is the time to persevere, press ahead, pursue our goals, show responsibility for our world, and take care of each other…It is up to us to rise to the test of this pivotal moment for our future”.

The penholders of the Charter “dared to imagine a better world defined by peace and equality”, General Assembly President Tijjani Muhammad-Bande told the commemoration.

“As we work towards the future we want, and the UN we need, we must be results-focused”, he asserted.  “Now more than ever, we need a strong UN development system and effective collaboration between the UN and international financial institutions”.

In pursuit of inclusive multilateralism, the Assembly president maintained that we must continue to create space for civil society and “ensure the full participation of voices that have gone unheard for too long”, such as women, youth, indigenous persons, and people with disabilities.

“This is a moment of reckoning for our shared planet and shared future. This is a time for action, ambition, and partnership”, he spelled out.

In closing Mr. Muhammad-Bande pointed out that three-quarters of a century ago, skeptics doubted the resolve of UN Members States, saying, “cynicism did not prevail then, nor will it now.

“‘We the peoples’ remain nations, united guided by the principles of our Charter”, he upheld.

Mona Juul, President of the UN Economic and Social Council (ECOSOC) pledged “to continue engaging… to ensure that ECOSOC remains as relevant today and in the future, as it was when first envisioned in the Charter 75 years ago”.

“Today,” she said, “the world is shifting beneath our feet”, calling the COVID-19 pandemic “a wake-up call for us to strengthen international collaboration”.

“75 years ago today, the UN Charter was signed in San Francisco”, the chief for UN Political and Peacebuilding Affairs Rosemary DiCarlo said. “A declaration of the unity of purpose after the ravages of the Second World War, it set out our mission: ‘to save succeeding generations from the scourge of war’ [and] guides us to this day”.