United Nations Association of Iran / News / Now is ‘not the time’ to reduce funding for the World Health Organization in COVID-19 fight, urges Guterres
Apr 15 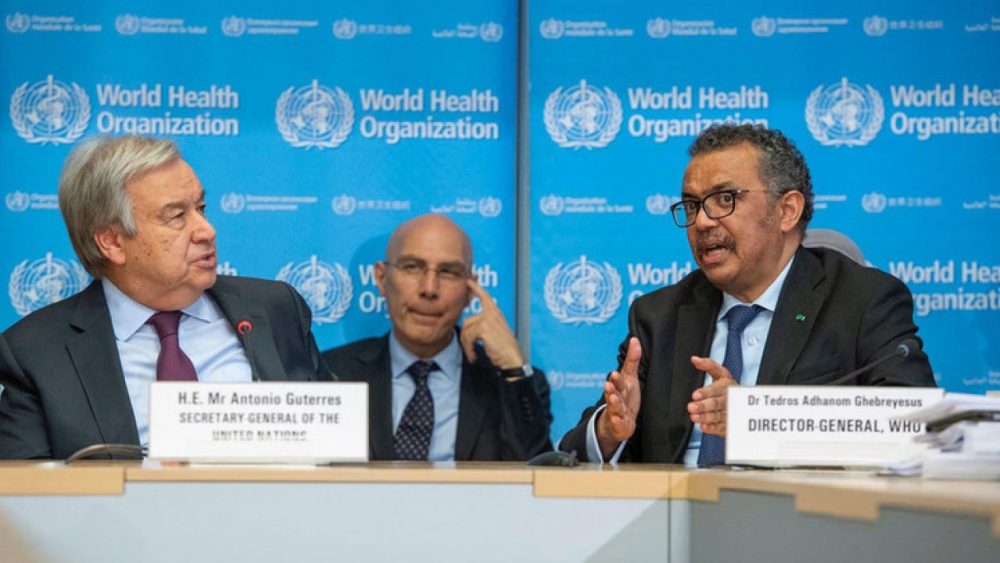 Now is ‘not the time’ to reduce funding for the World Health Organization in COVID-19 fight, urges Guterres

Now is a time for unity in the global battle to push the COVID-19 pandemic into reverse, not a time to cut the resources of the World Health Organization (WHO), which is spearheading and coordinating the global body’s efforts, said UN chief António Guterres, on Tuesday.

“As I said on 8 April, the COVID-19 pandemic is one of the most dangerous challenges this world has faced in our lifetime. It is above all a humanitarian crisis with severe health and socio-economic consequences”, he added.

The UN chief’s statement, came as the President of the United States, Donald Trump, announced early on Tuesday evening that he was halting funding for the UN health agency, pending a review of its response to the initial outbreak.

WHO, with thousands of its staff aiding and assisting operations across the world to limit the transmission of the coronavirus, “is on the front lines, supporting the Member States and their societies, especially the most vulnerable among them, with guidance, training, equipment and concrete life-saving services”, said the Secretary-General.

“It is my belief that the World Health Organization must be supported, as it is absolutely critical to the world’s efforts to win the war against COVID-19.”

Reiterating the argument which he made last week, the UN chief noted that given the unprecedented nature of COVID-19 and the subsequent global response that was needed to defeat it, “it is possible that the same facts have had different readings by different entities. Once we have finally turned the page on this epidemic, there must be a time to look back fully to understand how such a disease emerged and spread its devastation so quickly across the globe, and how all those involved reacted to the crisis.”

The lessons learned will be essential to effectively address similar challenges, as they may arise in the future”, Mr. Guterres added. “But now is not that time.”

Resources must be maintained

Until then, “it also not the time to reduce the resources for the operations of the World Health Organization or any other humanitarian organization in the fight against the virus.”

Mr. Guterres made it clear that unity must prevail so that the international community can work together, “in solidarity to stop this virus and its shattering consequences.”

Ever since the disease emerged in Wuhan, China, and the first case of pneumonia “of unknown cause” was reported to WHO on 31 December last year, the agency has been working 24/7 to analyze data, provide advice, coordinate with partners, and help countries prepare. The outbreak was declared a Public Health Emergency of International Concern, a month later.

See our piece here, on five of the key ways that the agency has been leading the global response.

As of Tuesday, there are more than 1.8 million confirmed cases, according to WHO figures, with more than 117,000 confirmed deaths, and 213 countries, areas or territories with cases of the new coronavirus.