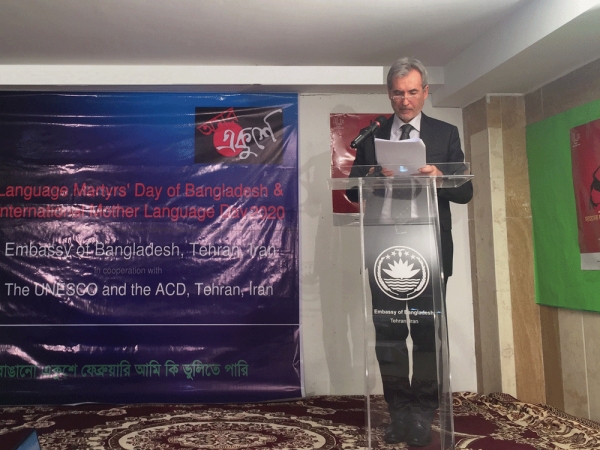 On 22 February 2020, UNESCO Tehran Cluster Office, together with the Asia Cooperation Dialogue Organization and the Bangladeshi Embassy in Tehran, participated in the celebration of the International Mother Language Day – 21 February, under the theme of “Languages without Borders”.

The event took place in the Bangladesh Embassy in Tehran. In their discussions, the participants emphasized different aspects of the role of cultural and linguistic diversity for strengthening the unity of societies, fostering tolerance and respect for others.

Mr. Hossain, the commercial counselor of the Embassy of Bangladesh urged that “we have to pay full respect to the mother language of every nation”.

Mr. Issa Rezazadeh, the president of the Asia Cooperation Dialogue, referred to a poem by the Iranian poet, Rumi: “Speak a new language so that the world will be a new world”. He stated that if we deprive people of their language, we have deprived them of their culture, their way of life.

Mr. Cvetan Cvetkovski, Officer-in-Charge of the UNESCO Tehran Cluster Office emphasized the importance of cultural and linguistic diversity for strengthening the unity and lasting peace both within and between societies: “Languages are the most powerful way to preserve and develop culture and to promote it all across the world.” He further talked about UNESCO’s global efforts in all fields of its competence to preserve linguistic diversity; including those belonging to indigenous communities, namely the 2019 International Year for Indigenous Languages resulting in the proclamation by the UN General Assembly of the International Decade of Indigenous Languages (2022-2032).

H.E. Mr. AFM Gousal Azam Sarker, Ambassador of the People’s Republic of Bangladesh in Iran, then delivered a concluding speech about the importance of the International Mother Language Day to the people of Bangladesh and talked about the efforts of his country in preservation of languages belonging to minority communities, many of which are without scripts.

The celebration was followed by multi-lingual poetry recitations and musical performances.