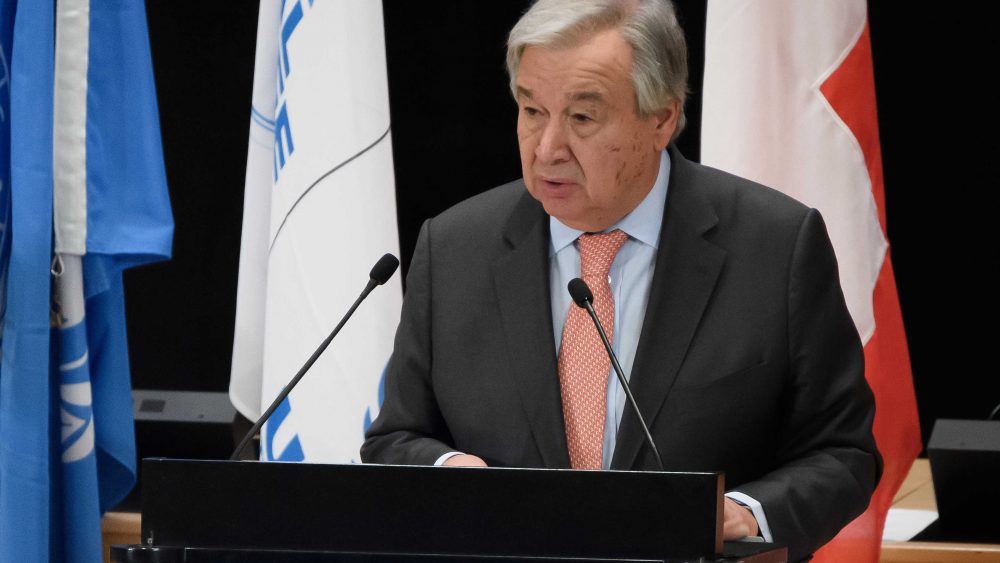 Six youth leaders from around the world were at UN Headquarters in New York on Wednesday to share their ambitious visions for a future where international cooperation is prioritized and everyone’s voice is heard.

They took part in a discussion with Secretary-General António Guterres marking the official launch of dialogues being held worldwide this year to mark the UN’s 75th anniversary.

As Mr. Guterres explained, this initial high-profile UN75 dialogue will set the tone for these global conversations on how the Organization can work harder to create a better future for all.

“We want to change, we want to be better, we want to respond to your aspirations, to your concerns,” he said.

“We want you to have the opportunity to play the role that youth must play in the modern world in which we live, and especially in the world we are trying to build.”

Diverging from most UN meetings, where speeches from the dais are the norm, the Secretary-General instead sat in a semi-circle with the participants, stressing that he was there to listen, not to take questions.

For recent graduate Jahan Rifai, from Jordan, a better world means the more than 71 million people who have been uprooted by war or persecution, being able to return home.

“I would also like to see the resolution of the conflicts of today as well as of yesterday that have continued on with no seeming end in sight,” she added.

Earlier, Mr. Guterres had asked the panelists, as well as scores of young people in the room, if they felt the world will be better, worse or the same in 25 years’ time when the UN turns 100.

“I think there is a wave of optimism,” he stated, based on the show of hands.

Natalia Herbst from Argentina was in the glass-half-full camp, but with reservations.  As an activist for social inclusion, she said the Sustainable Development Goals (SDGs) already provide a roadmap for a more just future, but only if everyone gets on board.

“The ongoing resistance from many power holders to adhere to a very basic fact-based consensus which is relevant to climate change and to reproductive rights is becoming very challenging to fulfill the SDG agenda by 2030, which would be a very promising step towards a better 2045”, she stated.

Gender equality is a UN priority, and the Secretary-General found an ally in Isaiah Owolabi, co-founder of the HACEY Health Initiative which works to improve the lives of women and girls in Nigeria.

He has found that technology is an obstacle to achieving gender equality but also to eradicating poverty.

“And if we also look at climate change, it’s something that the world should be very, very concerned about because it has the capacity to negatively impact generations across different sectors, and it has also the capacity to cause chaos beyond what we can imagine”, he added.

Eleonore Pauwels from Belgium researches the security and governance implications of artificial intelligence (AI) and other technologies.  She underscored the “unique role” of the UN to act as a bridge between the political and technical sectors, promoting the use of powerful new technologies for the common good.

She explained that while AI and cybersecurity can help prevent hate speech, reduce human trafficking, ward against election fraud, and deter cybercrime, they are not entirely risk-free.

“AI plus DNA technologies mean that we can develop precision medicine; we can also develop more powerful biotech weapons”, she said.  “So, how do we train the next generation to anticipate, think and translate norms into accountability mechanisms that will protect us? I think that is really the next challenge.”

UN staff member Ahmet Joshi, from Nepal, also hoped for more action to curb the negative use of AI, and to protect people’s right to privacy.

“Data can be collected by both corporations as well as governments,” said Mr. Joshi, who is a member of the Young UN network.

“Corporations try to collect data in the name of making profits without getting explicit consent from you.  At the same time, Governments start collecting and monitoring and tracking you 24/7 to suppress your voice.  So where are we now heading to? There is no freedom of speech.”

UN75: More than a birthday celebration

The Secretary-General will present the opinions, ideas, and solutions generated through the various UN75 dialogues globally, and an online survey initiative, at a high-level summit for world leaders in September.

Cristina Petcu, a global governance researcher from Romania, hoped this anniversary year will be “more than just a birthday celebration”.

She told Mr. Guterres: “I would also encourage you to treat the UN’s 75th anniversary as a landing pad for a few timely innovative reforms for global governance, but more as a launchpad for more ambitious reforms that might take more time to mature and to garner political support.”