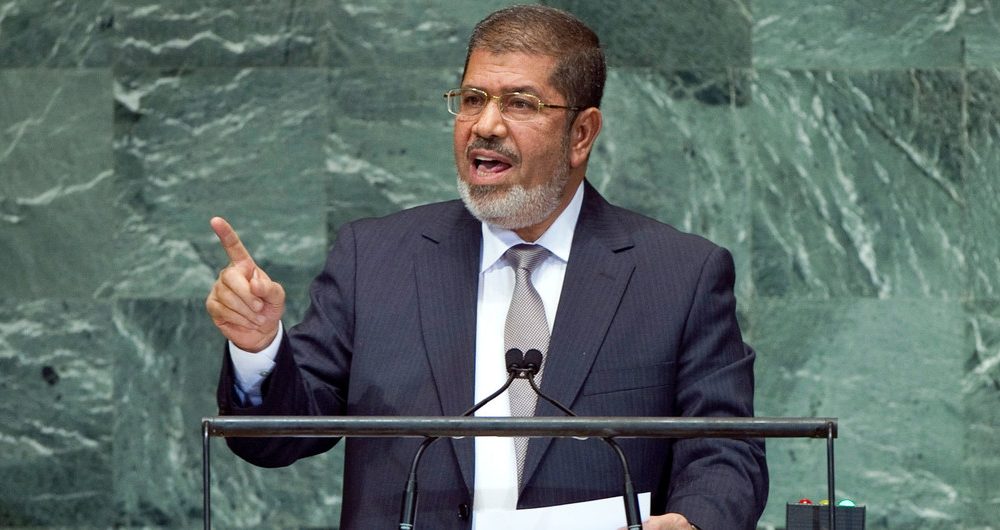 A group of independent UN human rights experts said on Friday that there was “credible evidence” that inadequate prison conditions in which former Egyptian President Mohamed Morsi was held may have led “directly” to his death in June, and thousands of other detainees may be at “severe risk”.

“Dr. Morsi was held in conditions that can only be described as brutal, particularly during his five-year detentions in the Tora prison complex”, said Agnes Callamard, Special Rapporteur on extrajudicial killings, together with the UN Working Group on Arbitrary Detention.

“Dr. Morsi’s death after enduring those conditions could amount to a State-sanctioned arbitrary killing”, they added in a press release.

The late Egyptian leader was placed in solitary confinement for 23 hours of each day, the experts explained. While serving six years of jail time on charges of alleged terrorism, spying and escape from prison, “he was not allowed to see other prisoners, even during the one hour a day he was permitted to exercise.”

“He was forced to sleep on a concrete floor with only one or two blankets for protection. He was not allowed access to books, journals, writing materials or a radio”, the independent rights experts detailed in an “official communication” to the Government.

Mr. Morsi, who took office as the first democratically-elected head of State in modern Egyptian history from 2012 to 2013 – before a military takeover – also “was denied life-saving and ongoing care for his diabetes and high blood pressure” while incarcerated, the group went on, and consequently, “he progressively lost the vision in his left eye, had recurrent diabetic comas and fainted repeatedly. From this, he suffered significant tooth decay and gum infections.”

Despite repeated warnings to authorities that such conditions would gradually undermine Mr. Morsi’s health, to the point of killing him, “there is no evidence they acted to address these concerns, even though the consequences were foreseeable.”

Prisoners ‘effectively-being killed by the conditions’

Former affairs adviser to the late President, Dr. Essam El-Haddad, and his son, Mr. Gehad El-Haddad, who was the chief spokesman for the banned Muslim Brotherhood organization, considered a terrorist group by Egyptian courts, at the time of his arrest, are among the thousands of other prisoners enduring similar conditions.

“These two men are effectively being killed by the conditions under which they are held and the denial of medical treatment. It appears that this is intentional or at the very least allowed to happen through the reckless disregard for their life and fate”, the experts noted.

“We have received credible evidence from various sources” that gross human rights violations may be a reality for thousands of detainees more across the State, “many of whom may be at risk of death”, they went on.

Further, they urged Egypt to promptly address its prison conditions “and reverse what appears to be deeply entrenched practices” on people’s right to a life free of torture, ill-treatment, and the right to due process and medical attention.

These violations place Egypt’s inmates at risk of death or “irreparable damage to their health”, thus, the experts called for an effective and impartial investigation into Mr. Morsi’s “unlawful death…and all other prisoners who died in custody since 2012.”

The experts said they have engaged with the Egyptian Government and will continue to monitor the situation and have offered their assistance to collaborate with relevant stakeholders to address the larger problem of dire prison conditions in the country.

The UN’s High Commissioner for Human Rights, Michelle Bachelet, has previously expressed extreme concern for the country’s prosecution approach after the Egyptian court confirmed it would sentence 75 people to death, and 47 to life in prison in a crackdown on Muslim Brotherhood-led protests in 2013. She called the sentences a “gross and irreversible miscarriage of justice.”