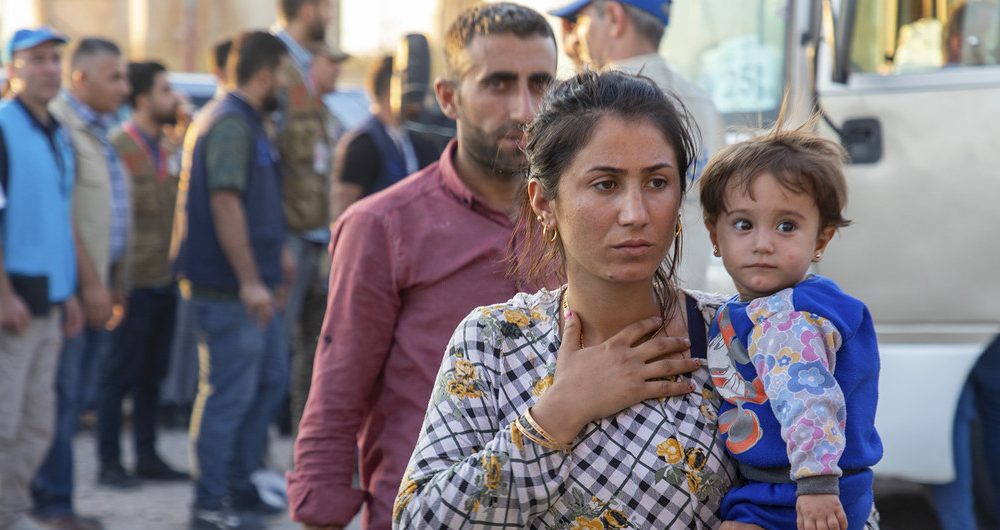 Shelling and clashes in northern Syria on the border with Turkey continue to cause hundreds of people to flee, the UN said on Friday, despite a cessation of hostilities deal between Turkish forces and Syrian-backed Kurdish military.

Hailed as a ceasefire by some governments and a five-day pause in hostilities by others on Thursday, the agreement comes nine days into a military campaign launched by Turkey against Kurdish-held territory on its southern border, east of the Euphrates river.

“Despite the announcement of the ceasefire…shelling and intermittent clashes continue to be reported around Ras-al-Ain as of this morning, although the situation is reportedly calm elsewhere”, said Jens Laerke from the Office for the Coordination of Humanitarian Affairs (OCHA).

Updating journalists in Geneva, several UN agencies confirmed that they were continuing to deliver aid and provide basic services in the conflict zone “where access allows”.

Highlighting critical needs, the World Health Organization (WHO) appealed for the humanitarian response to be scaled-up urgently.

Spokesperson Tarik Jasarevic noted that 40 tonnes of medical supplies had been airlifted from Damascus to Qamishli earlier this week, while Ras al-Ain and Tal Abyad hospitals remain closed.

This has made Tal Tamr Hospital “the main reception point for wounded persons coming from conflict at Ras al-Ain”, he explained, adding that it has “struggled to cope with the influx of patients” and patients who have since been sent to Al Hasakeh and Qamishli.

The WHO supplies – which include more than 100,000 treatments and 620 trauma kits – will be distributed to facilities in Al-Hasakeh, rural Raqqa, and rural Deir-Ez-Zor.

Meanwhile, the World Food Programme (WFP) announced on Friday that it plans to reach 580,000 people in affected areas this month.

Since 9 October, the UN agency has provided assistance to 170,000 people, spokesperson Herve Verhoosel said. “There are more than 165,000 people on the move in the north-east, and they seek shelter in Al-Hasakeh and in Raqqa,” he added. “Many people in those cities choose to stay with family and friends rather than in collective shelters, so that figure, in fact, can even be higher.”

‘Deconfliction’ call from UNICEF to allow repairs to water supply

Lack of drinking water to 400,000 people is still a serious concern in Al-Hasakeh, UN Children’s Fund (UNICEF) said, noting that the Alouk water pumping station there is still not working owing to damage to power lines.

“Deconfliction is needed to allow UNICEF to supply 16,000 liters of fuel on a daily basis in order to run the back-up generators,” insisted spokesperson Marixie Mercado.

Asked to comment on Turkey’s reported wish to send home some of the nearly four million Syrian refugees who have been sheltering in the country for years, to live in a so-called “safe zone”, Andrej Mahecic from the UN Refugee Agency (UNHCR) replied that it had not seen any proposals “from any party”.

Syrians must only be returned from Turkey if they want to go: UNHCR

Mr. Mahecic confirmed that for the fifth consecutive day, hundreds of people continue to arrive in Iraq after fleeing north-east Syria, mostly women, children and the elderly.

“Another 734 refugees have entered Iraq last night. That is in addition to the 1,600 that we have moved to Bardarash camp over the past four days,” the UNHCR official said, adding that they reported fleeing shelling and fighting on their way to the border.