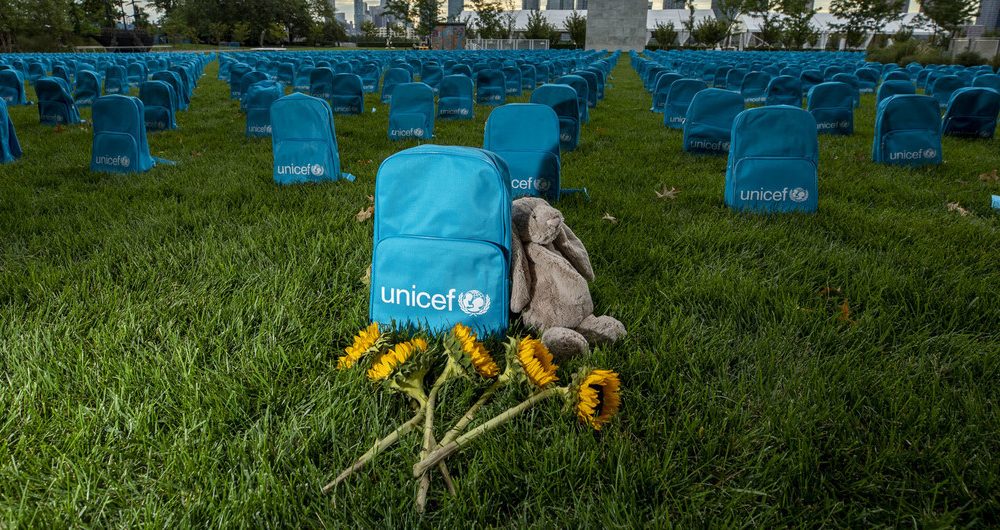 As children in many parts of the world return to school, the United Nations Children’s Fund (UNICEF) launched a haunting installation on Sunday that displays 3,758 school backpacks as headstones to illustrate the grave scale of child deaths in conflict in 2018 and call for greater protection of children living in conflict.

The UNICEF installation was unveiled in the garden at UN Headquarters in New York as a message to world leaders, who will convene for the annual General Assembly. It features rows of backpacks reminiscent of a graveyard, each one representing a senseless loss of a young life to conflict.

“UNICEF backpacks have always been a symbol of hope and childhood possibility,” said UNICEF Executive Director Henrietta Fore.
“In just two weeks, world leaders gathering at the UN General Assembly will celebrate the 30th anniversary of the Convention on the Rights of the Child”, she continued, saying: “This installation should remind them of the stakes”.

The installation will run through 10 September, and once it is taken down, the backpacks will continue on their journey to support children’s education.

According to the 2019 Annual Report of the Secretary-General on children and armed conflict, more than 12,000 children were killed or maimed in conflict zones last year – the highest number since the UN started monitoring and reporting this grave violation.

And these are only verified incidents, with the actual numbers likely to be much higher.

The vast majority of child casualties in armed conflict are caused by the continued and widespread use of explosive weapons, such as airstrikes, landmines and cluster munitions.

Ms. Fore said that “as many children go back to school this week, we are drawing attention to the thousands of children killed in conflict zones and whose tragic loss will forever be felt in their homes, classrooms and communities around the world”.

“The remarkable gains made for children in the last 30 years clearly show what we can do if we harness the political will to put children first”, concluded the UNICEF chief.