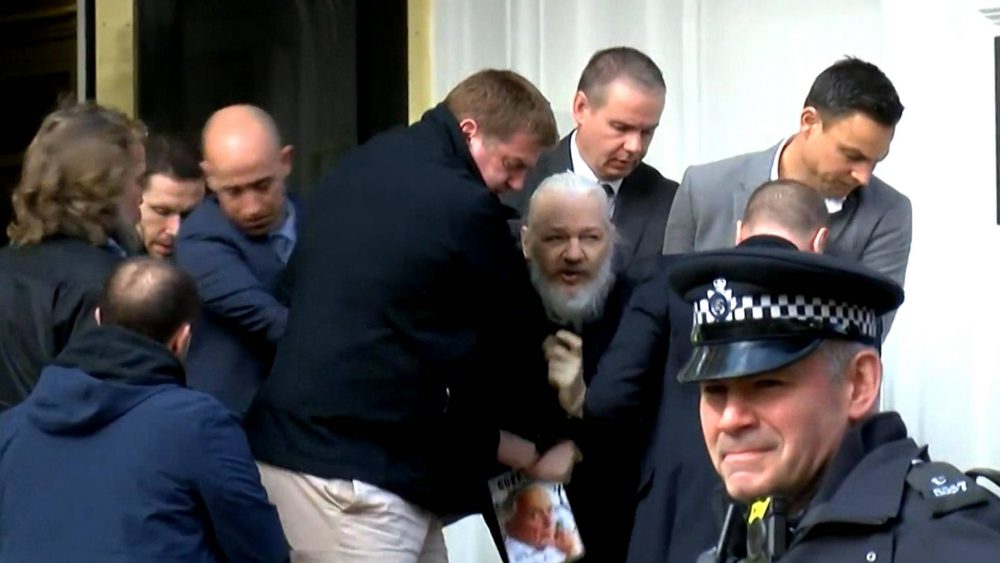 Independent UN rights experts on Thursday said the arrest of Wikileaks co-founder Julian Assange by police in the United Kingdom, after the Ecuadorian Government decided to stop granting him asylum in their London embassy, exposed him to “the risk of serious human rights violations”, if extradited to the United States.

Special Rapporteur on extra-judicial executions, Agnes Callamard, tweeted that in “expelling Assange from the Embassy” and allowing his arrest, it had taken Mr. Assange “one step closer to extradition”. She added that the UK had now arbitrarily-detained the controversial anti-secrecy journalist and campaigner, “possibly endangering his life”.

Mr. Assange took refuge inside the embassy in 2012, to avoid extradition to Sweden by the UK authorities where he faced charges, since dropped, of sexual assault. But he also faces US federal conspiracy charges, relating to the leak of a vast number of Government documents to his Wikileaks website, by the former US intelligence analyst, Chelsea Manning. The US argues that publication by the investigative site, endangered the lives of its citizens working overseas.

According to reports, the UK will now assess whether to extradite the Australian national to the US, where he faces up to five years in prison. The UK has reportedly given assurances in writing to the Ecuadorian Government that Mr. Assange will not be extradited to a country where he could face torture, or the death penalty.

After appearing in a central London courtroom on Thursday, Mr. Assange was found guilty of failing to surrender to the court in 2012, and now faces up to 12 months in prison.

The UN independent expert on the right to privacy, Joe Cannataci, issued a statement following the arrest, saying that “this will not stop my efforts to assess Mr. Assange’s claims that his privacy has been violated. All it means is that, instead of visiting Mr Assange and speaking to him at the Embassy…I intend to visit him and speak to him wherever he may be detained.”

In a statement last Friday, Special Rapporteur on torture, Nils Melzer, said he was alarmed by reports that an arrest was imminent, and that if extradited, Mr. Assange could be exposed to “a real risk of serious violations of his human rights, including his freedom of expression, his right to a fair trial, and the prohibition of cruel, inhuman or degrading treatment or punishment.”

Last December, the UN Working Group on Arbitrary Detention, urged the UK to “abide by its international obligations” and allow Mr. Assange safe passage out of the embassy.

“States that are based upon, and promote the rule of law, do not like to be confronted with their own violations of the law, that is understandable. But when they honestly admit these violations, they do honour the very spirit of the rule of law, earn enhanced respect for doing so, and set worldwide commendable examples,” said a statement released by the Working Group.

In December 2015, the Working Group concluded in its opinion No. 54/2015 that Mr. Assange – who at the time had a European arrest warrant issued against him for an allegation of crimes committed in Sweden ‑ was being arbitrarily deprived of his freedom and demanded that he be released.

“Under international law, pre-trial detention must be only imposed in limited instances. Detention during investigations must be even more limited, especially in the absence of any charge” said the experts. “The Swedish investigations have been closed for over 18 months now, and the only ground remaining for Mr. Assange’s continued deprivation of liberty is a bail violation in the UK, which is, objectively, a minor offense that cannot post facto justify the more than 6 years confinement that he has been subjected to since he sought asylum in the Embassy of Ecuador.”

“Mr. Assange should be able to exercise his right to freedom of movement in an unhindered manner, in accordance with the human rights conventions the UK has ratified,” the experts added.