United Nations Association of Iran / News / Progress has been made, but ‘not at a sufficient speed to realize the SDGs’: UN ECOSOC President
Jul 17 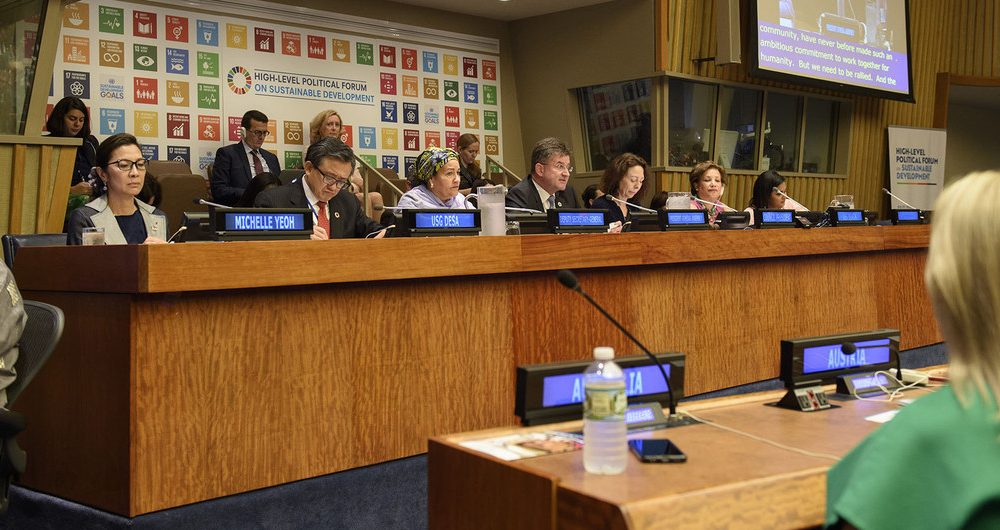 Progress has been made, but ‘not at a sufficient speed to realize the SDGs’: UN ECOSOC President

One week after zeroing-in on how to build sustainable, resilient societies, key players from around the world debated on Monday at United Nations Headquarters in New York, how to keep up the momentum to turn the 2030 Agenda for Sustainable Development into a reality.

Speaking at the opening of the major ministerial meeting of the High-Level Political Forum on Sustainable Development (HLPF) as well as the high-level segment of the Economic and Social Council, ECOSOC President, Marie Chatardová, cited progress that, at first glimpse, looked positive.

She pointed to extreme poverty, saying that even at one-third of the 1990 value, it was still imprisoning 10.9 per cent of world’s population. Moreover, while 71 per cent have access to electricity – a 10 per cent jump – a billion people still remain in the dark.

“There is progress, but generally not at a sufficient speed to realize the SDGs by 2030,” Ms. Chatardová said.

Despite that backdrop, Ms. Chatardová argued that the 2030 Agenda was being translated into concrete policies and measures: “It seems new ways of making policies are taking root, with many examples of more inclusive and evidence-based approaches,” she said.

Underscoring the importance of science and technology in advancing the goals, she outlined how they are being used to close gaps, such as on investing in renewable energy production and lowering prices; and countering major challenges in cities, from boosting housing affordability to accessing public spaces.

Ms. Chatardová stressed that the same level of engagement must be maintained in the years ahead, urging the world’s leaders to reaffirm their political commitment to the Agenda in 2019, when the high-level forum will also meet in September during the General Assembly.

“We do not have any time to waste,” General Assembly President Miroslav Lajčák told the meeting, focusing on four main points where progress had been made: “We have taken a sledgehammer to extreme poverty,” he began. “Innovations in healthcare are allowing people to live longer and healthier lives. Fewer children are forced to work – and more are where they belong: in school.”

In his second point, he spoke of “huge challenges ahead,” citing that gains made to reduce extreme poverty, have not benefitted everyone, with many are still dying from curable diseases. One-in-six people still lack safe drinking water; women and girls globally remain excluded or oppressed; and “the planet is, quite literally, melting,” he said.

“Moreover, we know that our demands for water, food, energy and housing are already unsustainable,” he added.

Thirdly, he painted a grim picture of how “the world would be a very scary place” without the 2030 Agenda and the Sustainable Development Goals (SDGs). Without the 17 Goals “unilateralism, protectionism and extremism would have even larger draws.”

Finally, he said better financing was as urgent priority as we “do not have enough money to meet our goals…But it is out there,” he stated. “We just need to go beyond our traditional models to get it.”

Deputy Secretary-General Amina Mohammed also highlighted progress in some areas, including maternal and child mortality; tackling childhood marriage; addressing global unemployment; and cutting the rate of forest-loss around the globe.

She also stressed that we are either moving too slowly, or losing momentum, citing that for the first time in a decade, the overall number of people who are undernourished has increased – from 777 million people in 2015, to 815 million in 2016 – fundamentally undermining our commitment to leaving no one behind.

Taking the podium, UN Youth Envoy Jayathma Wickramanayake, drew attention to the world’s 1.8 billion youth between the ages of 10 and 24, who have a key role to play in the 2030 Agenda.

“Young people will be the ones leading this agenda in the years to come. In fact, in many places they already are,” upheld the youth envoy, arguing that having been brought up in a world of technological innovation, today’s digitally-savvy youth are the world’s most interconnected generation ever.

“To solve the most pressing issues of our time, we must tap into the dynamism of young innovators, activists, entrepreneurs and advocates, who have the potential to disrupt the status quo and be a strong force for positive change,” Ms. Wickramanayake declared.