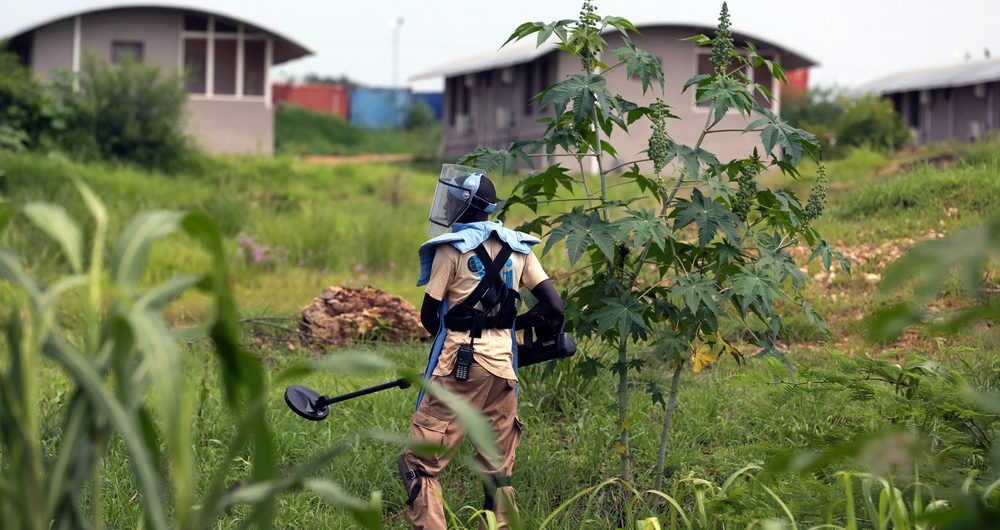 Mine action is ‘concrete step towards peace,’ says UN chief on International Mine Awareness Day

On the day set aside to raise awareness about the threat of landmines, unexploded grenades and other munitions that impede the return to normal life after conflict, United Nations Secretary-General António Guterres is urging Governments to provide political and financial support to keep up the vital work of mine action wherever it is needed.

“An unprecedented volume of landmines and unexploded weapons contaminates rural and urban war zones, maiming and killing innocent civilians long after conflict has ended,” Mr. Guterres said in his message on International Mine Awareness Day, marked annually on 4 April.

Noting that roads cleared of explosive devices enable peacekeepers to patrol and protect civilians, he said: “Mine action is vital.”

“And when fields are cleared and schools and hospitals are made safe, normal life can resume,” he added.

According to the UN Mine Action Service, or UNMAS, after nearly two decades of steadily diminishing casualty rates, the total number of people killed or injured by landmines and other explosive hazards in recent and current intense conflicts has leapt to its highest since 1999; the human suffering caused by mines, explosive remnants of war and other explosive hazards, including roadside bombs or booby traps, is devastating.

Mine action, including clearance, risk education and assistance to victims is critical for advancing protection, peace and development.

“In our turbulent world, mine action is a concrete step towards peace,” stated the Secretary-General.

UNMAS says that mine action entails more than removing landmines from the ground; it includes five types of actions:

Most places affected by armed conflicts are contaminated by a variety of explosive hazards, said Daniel Craig, the UN Global Advocate for the Elimination of Mines and Explosive Hazards.

Whether landmines, improvised explosive devices (IEDs), artillery shells or cluster bombs, he said in his message on the Day: “They are equal opportunity killers.”

“When triggered, they kill indiscriminately. Soldier or civilian. Male or female. Old or young,” he continued, explaining that over time they can more and more easily be detonated to the point when “they can easily be triggered by a child jumping a rope.”

Mr. Craig, best known for his role as ‘007’ in the James Bond films, outlined how mines curtail freedom – the freedom to play, collect food and water, farm and even vote.

“We the peoples of the United Nations must join forces to defeat these deadly devices and win the fight against fear and inhumane suffering.”

Mine action: protection, peace and development

A series of events marking the Day began on Tuesday with documentarians who have filmed in Iraq and Afghanistan for UNMAS participating in a Facebook Live under the headline: “UNMAS Through the Lens.”

On Wednesday at UN Headquarters in New York, Germany and UNMAS will host an event based on the theme of this year’s International Day, ‘Mine Action: Advancing Protection, Peace and Development.’

A live demonstration and discussion on the technical aspects and impacts of IEDs will wrap up the commemoration on Thursday, 5 April.