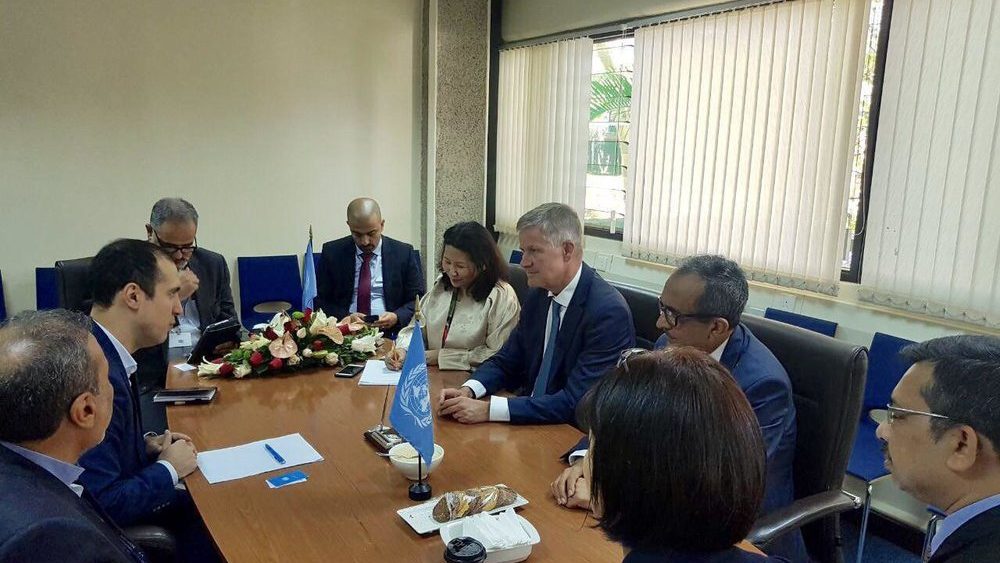 An Iranian environment official Kaveh Madani has proposed establishment of a regional center for sand and dust storm assessment in the Middle East.

Madani, deputy environment chief for international affairs, innovation and socio-cultural engagement of the Department of Environment (DOE), made the request over a meeting with United Nations Environment Program (UNEP) Executive Director Erik Solheim on the sidelines of the UN Environment Assembly (UNEA), December 4-6.

Water shortage and sand and dust storms are two of the “major challenges” Iran is confronted with, Madani who was also appointed as vice president for UNEA on behalf of Asia-Pacific group said, DOE’s official website reported.

The Iranian scientist further stated that “as a researcher I believe that building a scientific and technical link in environment assessment, collecting and updating accurate and credible information, and recognizing all causes of an [environmental] predicament would positively affect the reformation of poor strategies and resolve environmental challenges.”

Environment [protection] is a complex and cross-sectoral issue which entails increased national, regional, and international cooperation, he added.

Speaking on adoption of resolutions on fighting sand and dust storms Madani expressed hope that such resolutions would speed and cultivate cooperation with United Nations funds, programs, and specialized agencies such as United Nations Environment Management Group (EMG) to provide finance and scientific expertise which lead to mapping out an international strategy to fight sand and dust storms.

Creating a mutual understanding and rooting out all problems and the causes [lie in environmental challenges] would straighten out environmental issues, he suggested.

Identifying and assessing scientific and technical measures within the framework of regional and international cooperation in order to address environmental issues is essential, the UNEP official added.

Solheim further noted that in addition to former agreements the UNEP is ready to enhance scientific and technical cooperation in the field of sand and dust storms.

The UN Environment Assembly (UNEA), the world’s highest-level decision-making body on the environment, gathered in Nairobi, Kenya, from December 4-6, 2017 under the overarching theme of pollution.

Following the 2017 assembly the world committed to a pollution-free planet at the close of the UN Environment Assembly in Nairobi, with resolutions and pledges promising to improve the lives of billions across the globe by cleaning up our air, land and water.

If every promise made in and around the summit is met, 1.49 billion more people will breathe clean air, 480,000 km (or around 30 per cent) of the world’s coastlines will be clean, and USD 18.6 billion for research and development and innovative programs to combat pollution will come online.

The UN Environment Assembly has the universal membership of all 193 UN Member States and the full involvement of UN organizations, specialized agencies, inter-governmental organizations, civil society and the private sector.

This is the first time Iran has got elected as the event vice president for Asia-Pacific Group.