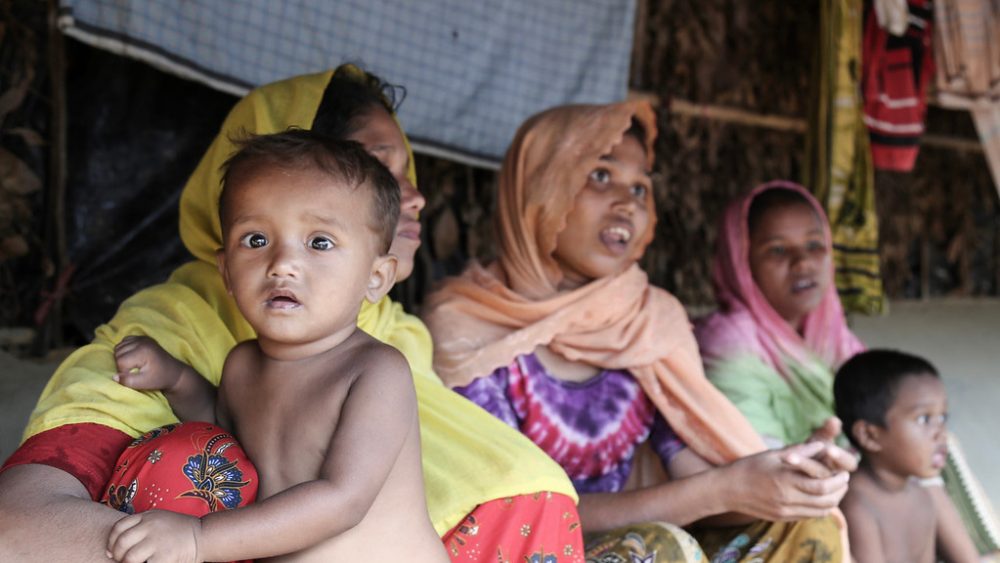 UN Emergency Relief Coordinator Mark Lowcock told reporters in Geneva that the more than half a million people who have arrived in Bangladesh from Myanmar in recent weeks need a greater level of help from the international community.

He called the situation “one of the most heart-rending,” recalling his encounter with an 11-year-old boy who was cradling his critically ill baby sister during his visit earlier this week to the host communities in Bangladesh.

“His mother, the boy and his four siblings had set off on a journey lasting, I think nine days, fleeing violence and the burning of their village. The mother died on the journey. This little boy is now in sole charge of his four siblings, including his two-and-a-half-year-old severely acutely malnourished sister,” he said.

Mr. Lowcock, who is also the UN Under-Secretary-General for Humanitarian Affairs, said some $434 million will be required in the coming months, calling for donor support ahead of the pledging conference in Geneva later this month.

For its part, the Office of the UN High Commissioner for Refugees (UNHCR) is seeking $83.7 million in additional funds for the next six months to help the Rohingya refugees in Bangladesh.

Latest estimates show that some 515,000 refugees have fled from Myanmar since 25 August, including people continuing to arrive this week by the thousands.

The emergency assistance is focused on refugee protection, shelter, water and sanitation and bolstering the capacity of the local host communities across south-east Bangladesh. Relieving dramatic overcrowding in the two existing camps – Kutupalong and Nyapara – which are now twice their population prior to the latest crisis –is also a priority.

In light of the scope and speed of displacement, UNHCR has declared a ‘Level 3 Emergency’ – the top level – for this crisis.

“We have so far organized five airlifts, flying in some 500 metric tonnes of aid. More flights are being planned. We have also doubled the number of our staff in Bangladesh to almost 100,” UNHCR spokesperson Andrej Mahecic told reporters in Geneva.

The World Health Organization (WHO) is also appealing for $10.2 million to support critical health interventions in the Bangladesh’s Cox’s Bazar area.

“The health needs of this immensely vulnerable population are massive, and growing,” said Roderico Ofrin, Regional Emergency Director for WHO South-East Asia in a press release.

“Though WHO has provided critical support to health services delivery – including by supporting mobile medical teams and mobilizing life-saving medicines – the need to scale-up operations is clear.”

WHO is currently working with the Ministry of Health and Family Welfare and partner agencies to plan and implement an oral cholera vaccination campaign that will provide life-saving protection against the disease to 900,000 people.

Since the first signs of the rapid influx emerged, WHO has established joint coordination of the health sector to best utilize WHO’s technical and operational capacity, and helped vaccinate 135,000 children against measles and rubella and 72,000 against polio. WHO also supported the provision of Vitamin A to 72,000 children.

To increase access to safe water, sanitation and hygiene, WHO has deployed an environmental health team to Cox’s Bazar to assess and monitor drinking water and initiate cholera prevention measures. As part of this, WHO has provided supplies to treat 20,000 cases of diarrheal disease.

According to the International Organization for Migration (IOM), an estimated 2,000 Rohingya refugees a day are still arriving in Cox’s Bazar. Observers believe that as many as 100,000 more people may be waiting to cross into Cox’s Bazar from North Rakhine’s Buthidaung Township in Myanmar.

The UN migration agency this week issued an appeal for $120 million through March to provide desperately needed aid to the refugees who have flooded into Cox’s Bazar.

The IOM appeal is part of a broader humanitarian response plan seeking $434 million to help 1.2 million people, including the Bangladeshi host community.