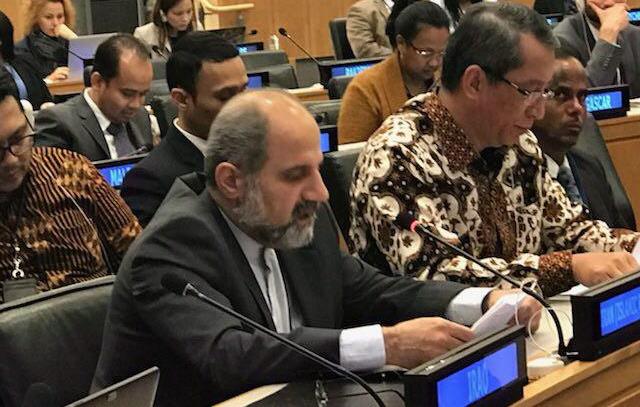 Al-e-Habib made the remarks while addressing the General Debate of the Second Committee 72nd session of the General Assembly.

‘As incidents of conflicts and extremism have increased in recent years, it is extremely important to address the diverse needs and challenges of countries and regions, including the Middle East, to achieve SDGs,’ he addedd.

Full text of his address follows:

At the outset, I would like to congratulate you on assuming this responsibility as the Chair of the Second Committee and allow me to congratulate all of the newly elected members of the Bureau of the Committee.

The Islamic Republic of Iran would like to associate itself to the statement delivered by Ecuador on behalf of G77 and China.

We see this session as an opportunity to further achieving the Sustainable Development Goals. The United Nations should play the critical role of coordinating and strengthening the global partnership for sustainable development as well as enhance cooperation and partnership at the regional and international levels. Among the common challenges, poverty eradication is the greatest one.

The operational activities for the development of the United Nations system should provide a key contribution to the implementation of the Sustainable Development Goals through strengthening capacities of developing countries.

Sustainable development and peace can only flourish together. As incidents of conflicts and extremism have increased in recent years, it is extremely important to address the diverse needs and challenges of countries and regions, including the Middle East, to achieve SDGs. This region continues to be affected by conflicts and wars that has forced millions of people into abject poverty. Addressing poverty in this region is a vital requirement for regional stability and prosperity.

Trade is another main engine for growth and sustainable development. Upholding a universal, rule-based, open, non-discriminatory, depoliticized and equitable multilateral trading system that contributes to the growth and sustained development is an indispensable requirement, particularly for developing countries.

The Islamic Republic of Iran attaches great importance to achieving sustainable development at the national and regional levels and has successfully taken great steps to overcome its challenges. Hence, all legally binding documents, such as the 2025 Vision Document and Sixth National Development Plan, directly and indirectly focus on poverty eradication. As a result of national efforts, the Human Development Index (HDI) had shown a positive change in recent years. Similarly, the Legatum Prosperity Index has improved in 2016 whencompared with the results obtained in 2013.

We have had improvements in some targets of Goal 2 as well. For example, malnutrition in children under the age of five has reduced from 13.8 percent in 1995 to 4.4 percent in 2015; that shows a 68 percent improvement.

Improving public health is one of our key priorities. Accordingly, in May 2014, the Government of the Islamic Republic of Iran launched a new major program for achieving Universal Health Coverage (UHC) in an effort to reform the health sector, namely, the Health Sector Evolution Plan (HSEP). The overarching aim of HSEP is to achieve UHC by 2025, five years before the global Sustainable Development Goal target date.

As we continue to face the adverse consequences of climate change, it remains another common challenge of our times. Our efforts to mitigate its emission over the past three decades has not been achieved due to a number of specific obstacles, in particular the unjust unilateral sanctions. Despite such circumstances, the Islamic Republic of Iran has elaborated plans and programs tending to move toward a low carbon economy. In this respect, the general policies emphasize that the implementation of the national development plans will be with due consideration and institutionalization of a climate resistance approach in all activities at all levels.

There are many common challenges in our region to be addressed, as well as ample opportunities to benefit from, in line with our collective efforts towards peace, stability and development. Land degradation, desertification, land reclamation, pollution, habitat destruction, sea level rise, climate change, water scarcity, dust and sand storms and mass mortality of marine life are among our regional challenges. We continue to seek cooperative opportunities to strengthen our collaboration with countries at the regional and sub regional levels with a view to setting an efficient framework designed towards achieving our regional sustainable development goals.

In conclusion, Mr. Chairman, I would like to emphasize that common development challenges also present us with opportunities for cooperation. We are eager to engage with partners who are willing to cooperate in addressing our common and immediate challenges, including poverty eradication and the protection of the environment.