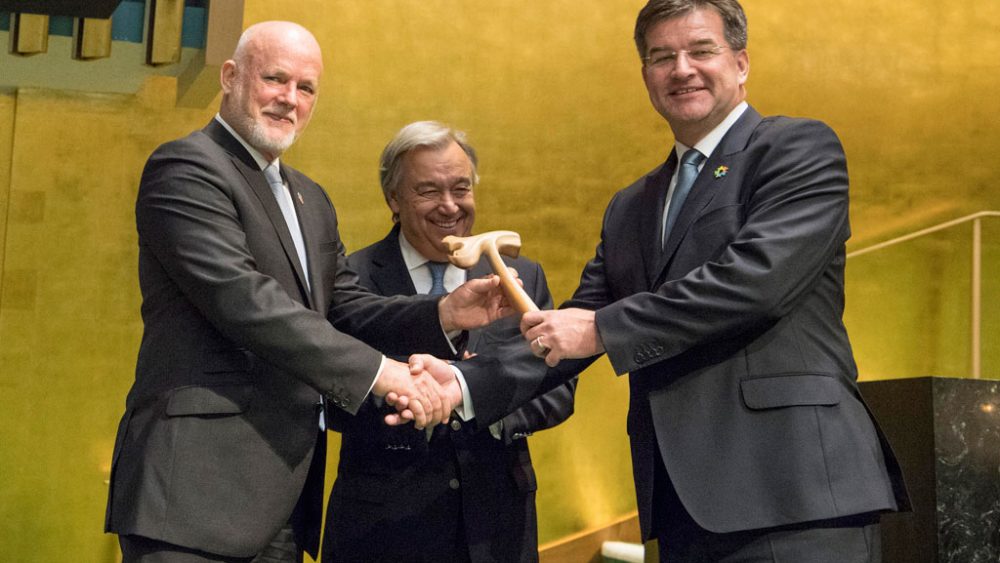 The United Nations General Assembly yesterday closed its 71st session with a focus on sustainable development, as outgoing president Peter Thomson handed over the gavel to his successor, Miroslav Lajčák.

In his final address, Mr. Thomson summarized the achievements of his one-year tenure, and urged the international community to raise awareness about the behavioral changes needed to create a more sustainable way of life and to combat climate change, as agreed to in the Sustainable Development Goals (SDG).

“We must embrace the power of innovation and technology to leverage SDG implementation and combat climate change at the speed and scale required,” he said. “We are witnessing exponential change in multiple areas of technology and we must manage the risks and seize the opportunities for the common good of humanity and the planet.”

Mr. Thomson also underlined the importance of partnerships and a change in how development is financed, as requirements for achieving the SDGs by the 2030 deadline.

“We have not come this far as a species only to be defeated by greed,” Mr. Thomson said, echoing what he told the press in his final press conference on Friday.

In that press briefing, Mr. Thomson said that he had written to all heads of government and to some 4,000 universities asking them to teach SDGs in school.

“We are stealing from our grandchildren’s future if we continue to take more from the planetary ecosystem than it can sustainably grant,” Mr. Thomson said in the statement.

Ahead of his address, Secretary-General António Guterres lauded the outgoing official for overseeing a “productive” session that included the adoption of a landmark declaration on refugees and migrants, the establishment of a technology bank for the least developed countries, and a momentum to save the oceans, among others.

“Thank you for helping to steer the Member States to a solid record of achievement over the past year. Day in and day out, you brought us together,” said the Secretary-General.

Paying homage to the 16th anniversary of the attacks on the World Trade Center and other targets in Pennsylvania and Washington, D.C., Mr. Guterres noted that this “spirit of unity has particular meaning today.”

“This was an assault on the United States. But so many of our Member States saw their citizens murdered that day,” he said. “I know you join me in expressing our sorrow and solidarity on this day.”

Following the remarks, the General Assembly stood for one minute of silent prayer or meditation, as is the custom, after which the incoming president, Mr. Lajčák, took the oath of office and received the symbolic gavel from Mr. Thomson.

Mr. Lajčák will open the 72nd session of the General Assembly tomorrow afternoon.