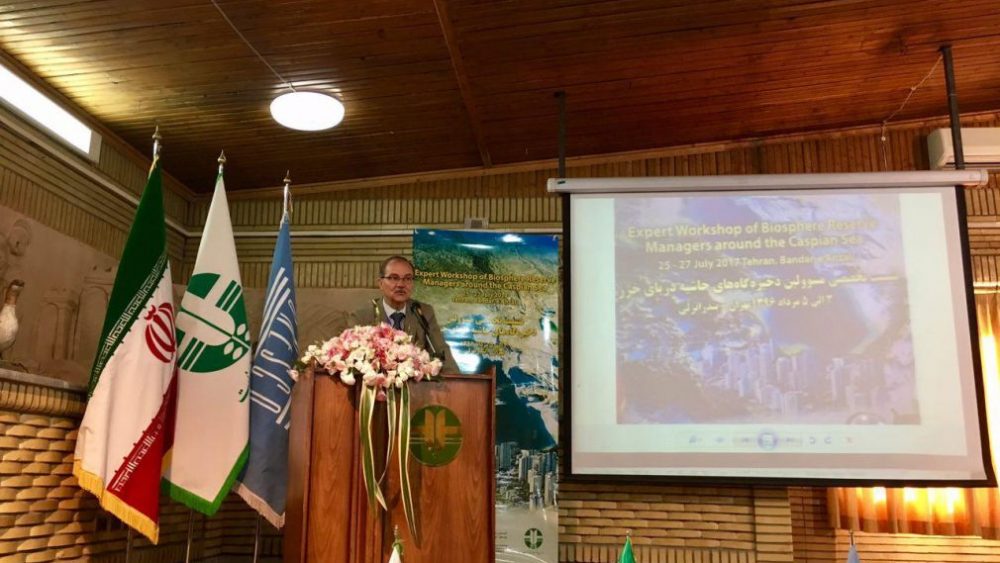 The United Nations Educational, Scientific and Cultural Organization (UNESCO) held a three-day (July 25-27) workshop on biosphere reserves around the Caspian Sea with representatives from Azerbaijan, Iran, Kazakhstan and Russia.

According to the official website of the UN bureau in Tehran, the Iranian participants of the workshop were experts from the Department of Environment, the Ministry of Energy of Iran, the Forests, Range and Watershed Management Organization, the Fisheries Organization, the Iranian National Oceanography Institute and provincial departments of environment in Boushehr, Golestan, Hormozgan, Khouzestan, Mazandaran and Sistan-Balouchestan provinces.

The workshop was organized by the UNESCO in close collaboration with the Iranian National Man and Biosphere Committee and the Deputyship of Marine Environment at the Iranian Department of Environment.

The main objective was to discuss challenges and opportunities for regional cooperation in environmental conservation around the Caspian Sea, using the UNESCO Biosphere Reserve Concept.

During the three-day meeting, an expert from Romania had also shared successful experiences of regional collaboration around the Black Sea.

She continued by saying that the figure itself is an indication of how well the concept of biosphere reserves is received in the region, and shows that it can be used as a solid vehicle for biodiversity conservation.

The UNESCO Representative concluded by expressing her hope that the workshop would pave the way for increased regional cooperation, using the UNESCO biosphere reserve Concept, to protect and better manage the Caspian Sea Environment.

In the meantime, Miguel Clusener-Godt of the UNESCO Headquarters in Paris highlighted the uniqueness of the UNESCO’s Man and the Biosphere (MAB) Program, which combines the natural and social sciences, economics and education to improve human livelihoods and safeguard natural and managed ecosystems, by promoting innovative approaches to economic development that are socially and culturally appropriate, and environmentally sustainable.

Deputy for Marine Environment of the Department of Environment, Dr. Parvin Farshchi, expressed her gratitude to the UNESCO for its support in organizing the workshop and highlighted the geopolitical, economic, and ecological importance of the Caspian Sea, which contains some unique species in the world, including the Caspian Seal.

She said that regional cooperation for the environmental protection of the Caspian Sea and its coastal areas was of great importance, not just to the neighboring countries, but to the entire world.

Meanwhile, Dr. Zehzad, Senior Advisor at the Deputyship of Natural Environment of Iran’s Department of Environment, highlighted that Iran has been an active player in the UNESCO MAB Program since its launch in 1971, and currently has 12 UNESCO Biosphere Reserves.

He emphasized that community participation is crucial in the management of biosphere reserves and called for the development of a joint database and systematic sharing of experiences among the Caspian littoral states.

After the opening session, the workshop started with country presentations on challenges and opportunities for regional cooperation in biodiversity conservation.

On 26-27 July, the workshop continued in Bandar Anzali at the Caspian Sea and included a visit to the Anzali wetlands.