United Nations Association of Iran / News / Incremental progress but ‘we’re not yet there,’ UN mediator on Syria reports
Apr 01 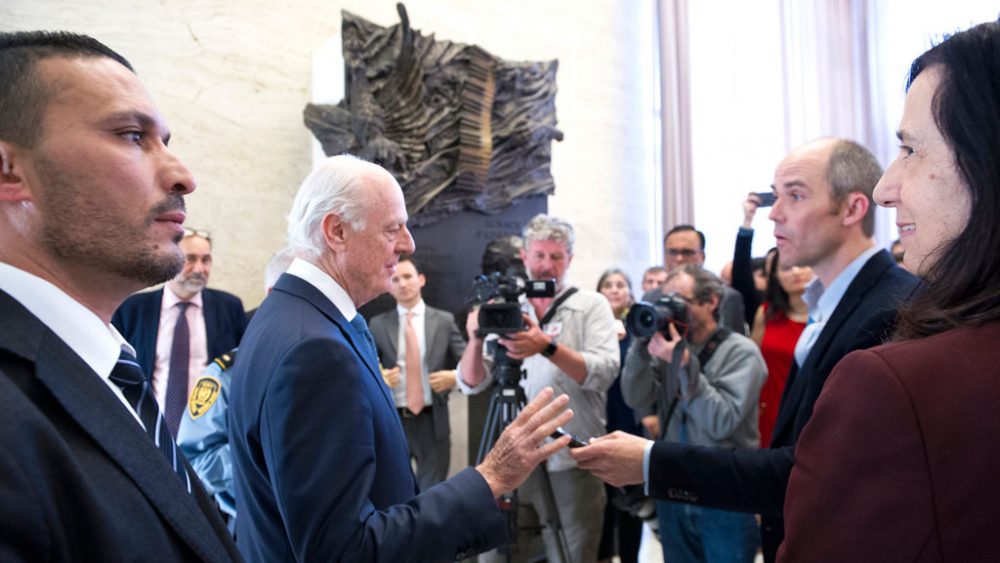 Incremental progress but ‘we’re not yet there,’ UN mediator on Syria reports

The latest round of the United Nations-facilitated intra-Syrian talks concluded in Geneva where UN envoy Staffan de Mistura told journalists the discussions had been serious and the parties engaged, but “we’re not yet there.”

When the current talks between the Syrian Government and opposition delegations began last week, UN Special Envoy Staffan de Mistura said he did not expect miracles, breakthroughs or breakdowns, but hoped to build on the previous rounds with some incremental, constructive steps.

The Syrian conflict now entering its seventh year, has devastated the country, killed hundreds of thousands of people and displaced millions.

Summarizing the spirit of the eight days of talks in the Swiss city, Mr. de Mistura said they had been “serious and engaged” on matters of substance – rather than on procedure. But he added that on the subject of real peace negotiations, many obstacles remain.

“No one can deny and I cannot deny that there are serious challenges and I’m not seeing immediately this developing into a peace agreement, no doubt about that […] In any negotiations there are certain issues that need to be prepared and discussed before the real peace negotiation starts. We are not yet there.”

During the talks, Mr, de Mistura said, the parties had covered all the issues on the table, including political transition, national integrity, counter terrorism, and confidence-building measures, among others.

Sometimes they’d been discussed “in depth;” on governance, security and constitutional issues – although he would have liked a little more detail on that last point, he said.

At the same time, he underscored: “There are real challenges on the ground, we are seeing them in front of our eyes, but let´s be frank: in spite of them, no one threatened to walk out and every one was serious and business-like in pursuing their points of view.”

He said that all the parties agreed to the next round of talks, but the details would be decided after he heads to New York late next week where he will seek guidance from the UN Secretary-General and Security Council.

In the meantime, Mr. de Mistura noted that next week, on 4 and 5 April, there will be an international conference on Syria and the region held in in Brussels, and that he hoped it would be an occasion for a better clarity of the international engagement on humanitarian assistance and reconstruction efforts.