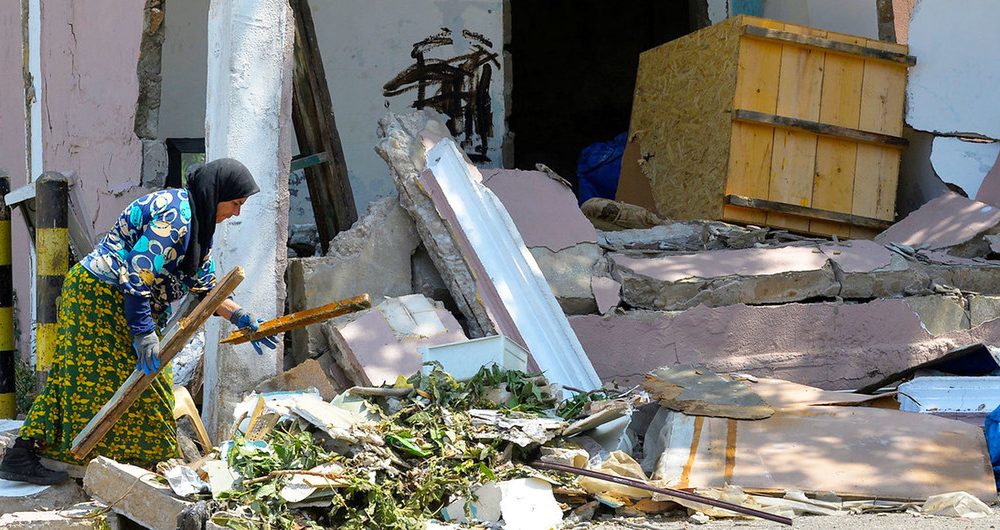 To help Lebanon overcome the tragedy and recover better, “we will need all hands on deck”, deputy UN chief Amina Mohammed told a virtual donors conference on Sunday, convened to rally international support in the wake of last week’s massive explosion at the Beirut port, which killed some 150 people, wounded thousands and caused destruction throughout much of the city.

“The explosion in Beirut last Tuesday shocked the world,” leaving neighborhoods flattened, a large part of Lebanon’s grain reserves obliterated, six hospitals damaged or destroyed, hundreds of thousands have been made homeless – many of them children, the Deputy Secretary-General told the donors teleconference, co-convened by French President Emmanuel Macron and the UN.

The deputy UN chief offered her condolences to those who lost loved ones, and full recovery to the thousands of injured. “Above all,” she said, “I give my pledge that the United Nations is committed to helping the people of Lebanon in every way we can.

Since the blast, the UN system has been working around the clock, delivering medical supplies, shelter kits, and food parcels, and helping reunite separated families, and Ms. Mohammed expressed gratitude to the donors that had to enable the Organization to jump into action.

“Financial support leveraged in record time – in particular from regional partners – is already making a difference. But of course, this is just the beginning,” she cautioned.

Ms. Mohammed said the damage to homes and public infrastructure is significant – and the response must match it.

The sense of urgency, large-scale activity and considerable funding required to tackle the recovery and reconstruction will need to go beyond the UN’s humanitarian system and involve a wider range of UN organizations and other partners.

“To help Lebanon overcome the tragedy and recover better, we will need all hands on deck,” said the Deputy Secretary-General, adding: “The faster we act, the better we can reduce human suffering, in Lebanon and beyond – let us not forget that the port that was destroyed also serves humanitarian needs in Syria.”

Anticipating and responding to the ongoing crisis

“As the dust settles, the deeper and longer-term impacts will become visible,” she continued, explaining that, led by the UN Resident Coordinator in Lebanon, the UN development system has been mobilizing in full emergency mode to support the Lebanese authorities.

“The United Nations will help strengthen safety nets for vulnerable people against the socio-economic crisis, and we are well equipped to do this. A focus on the long-term is essential to ensure this latest tragedy will mark a turning point for Lebanon,” she said.

Ms. Mohammed said that it would be a mistake to underestimate the cost of this work or its value. “This blast will have deep social and economic impacts. Not least because it came when Lebanon was already dealing with economic hardship and the coronavirus outbreak.”

She called for a focus on support to four priority sectors – health, food, the rehabilitation of buildings and the rehabilitation of schools, and added that: “We must also remember the importance of the Government of Lebanon implementing the reforms that will address the needs of the Lebanese people for the longer term.”

‘Count on the United Nations’

In remarks at the end of the virtual conference, the Deputy Secretary-General thanked the attended for their support to Lebanon and urged all other leaders to join in solidarity with the international effort.

“The world has responded, standing with the Government and people of Lebanon. Significant resources have been committed to answer the immediate needs of Beirut and the Lebanese people,” she said.

Such solidarity and support was heartening and reaffirmed the spirit in which the United Nations was founded 75 years ago, she stated, particularly amid the global COVID-19 pandemic.

Yet more will be required to ensure Lebanon can recover better from the tragedy, Ms. Mohammed stressed, noting that the UN Office for the Coordination of Humanitarian Affairs (OCHA), will continue to monitor the situation and humanitarian needs on the ground, while the UN Country Team will continue to work with the World Bank and other partners to support longer-term reconstruction and recovery.

“In the coming days, weeks and months, let us commit to keeping a focus on the needs of Lebanon and its people, including the many refugees the country generously hosts,” she said, and added: “You can count on the United Nations.”