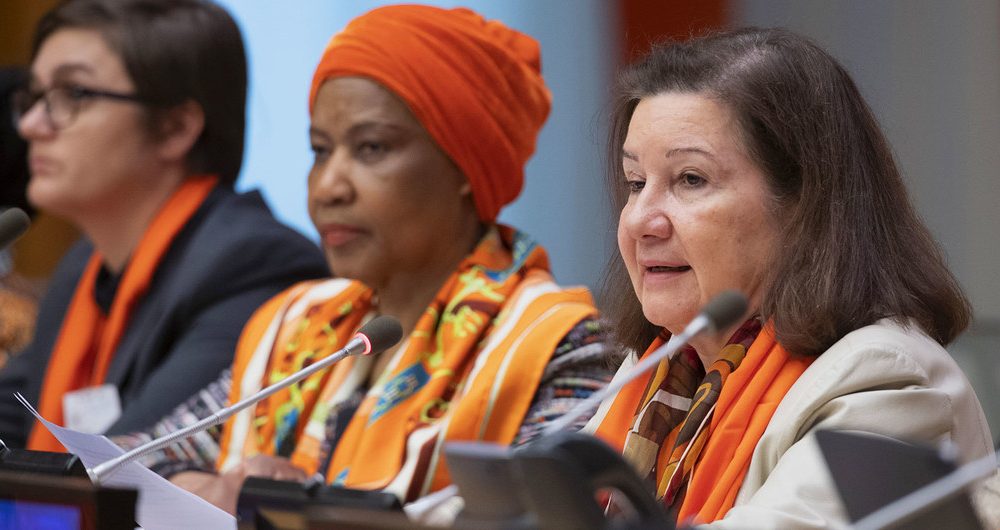 Violence against women a barrier to peaceful future for all

Senior officials from across the United Nations on Monday stood in solidarity with survivors of violence against women and activists working to end the all-too-common human rights violation.

“As we go about our business, one woman in three that we encounter has been or will be subjected to violence,” said Maria Luiza Ribeiro Viotti, UN Chef de Cabinet, speaking on behalf of the Secretary-General.

“In some regions, and for some groups of women, the rate is even far higher—and this is only the violence that is reported, so the real level is indeed far higher.”

Ms. Ribeiro Viotti was addressing an event marking the International Day for the Elimination of Violence Against Women and the start of 16 Days of Activism against gender-based violence.

She reported that growing evidence indicates strong links between violent misogyny and violent extremism, with implications for global peace and security.

“A culture of violence against women also has serious consequences for our efforts to eradicate poverty and promote inclusive sustainable development,” she said.

“Violence prevents women from participating in all areas of society in the decisions that impact their lives. It is a barrier to achieving the 2030 Agenda for Sustainable Development: our roadmap for peaceful prosperous lives on a healthy planet.”

Rape is a gross violation of human rights with long-term devastating impact, the head of UN Women told attendees.

“It has life-changing effects that range from pregnancy, sexually transmitted disease, immense and long-term trauma, an unwarranted sense of shame. In some situations, women are rejected by their loved ones. They are even punished by institutions in society”, said Phumzile Mlambo-Ngcuka, UN Women Executive Director.

Ajna Jusic, 26, from Bosnia and Herzegovina, knows these issues first-hand. Her mother survived wartime rape: a fate she would never wish upon anyone, she said.

It took her mother 15 years to tell Ms. Jusic about the circumstances surrounding her birth.  Today, the young activist fights for what she called the forgotten children of war.

“My mother’s heroism has no measure. Her struggle for me was incredible and still is today.  She fought for a child who had been deprived of fundamental rights: to know her origin. A child who didn’t know, and would never know family ties.  A child who had no idea of their genetic disposition but who was born with a heart defect. She fought for me.”

As the Special Representative of the Secretary-General on Sexual Violence in Conflict, Pramila Patten has met women like Ms. Jusic and her mother during field visits to countries such as Mali, Iraq and the Democratic Republic of the Congo.

Her work is part of UN efforts to stamp out a crime as old as war itself.  Action has included the adoption of a Security Council resolution against conflict-related sexual violence, as well as the establishment of the mandate for her Office.

“What had long been dismissed as inevitable is now understood as preventable.  What had once been deemed collateral or cultural, is today condemned as criminal,” Ms. Patten stated.

Since 1996, a UN Trust Fund to End Violence Against Women has awarded nearly $130 million to organizations such as the Sexual Offences Awareness and Victims Rehabilitation Initiative (SOAR).

Based in Nigeria, SOAR has mobilized child protection committees who respond to issues of sexual violence against girls. Adolescent girls have also been trained as peer educators who advocate at schools and within their local communities.

Their work in breaking the silence around sexual violence has drawn criticism for being “Un-Nigerian” or “Un-African”.

“So, while we agree that the issue of violence against women and girls has reached escalating proportions, I believe the UN Trust Fund has shown that partnerships with small grassroots local organizations like the one I work with, as well as Anja work within Bosnia…is one sure way of reclaiming back our own” the group’s Executive Director, Chinyere Eyoh said.

“Indeed, working together, I am convinced that the elimination of all forms of violence against women and girls is possible.”

Huge losses due to gender-based violence

Rape and other forms of gender-based violence (GBV) “inflict huge economic, political and social losses to individuals, households, and nation-states, and continue to be an obstacle to achieving equality, development, peace as well as to the fulfillment of women and girls’ human rights”, said the Deputy UN chief, Amina Mohammed, speaking in the Nigerian capital, Abuja, marking the International Day .

“The attainment of the Sustainable Development Goals (SDGs), and its promise – to leave no one behind – cannot be fulfilled without putting an end to violence against women and girls.” The Deputy Secretary-General described rape as the “extreme manifestation of a continuum of violence against women and girls.” The UN is committed to supporting governments the world over, she added, “including Nigeria, to safeguard the rights of women and girls from violence. The EU/UN Spotlight Initiative, to End Gender-based Violence which is being rolled out in a number of countries including Nigeria, is an important expression of the support of the international community”.