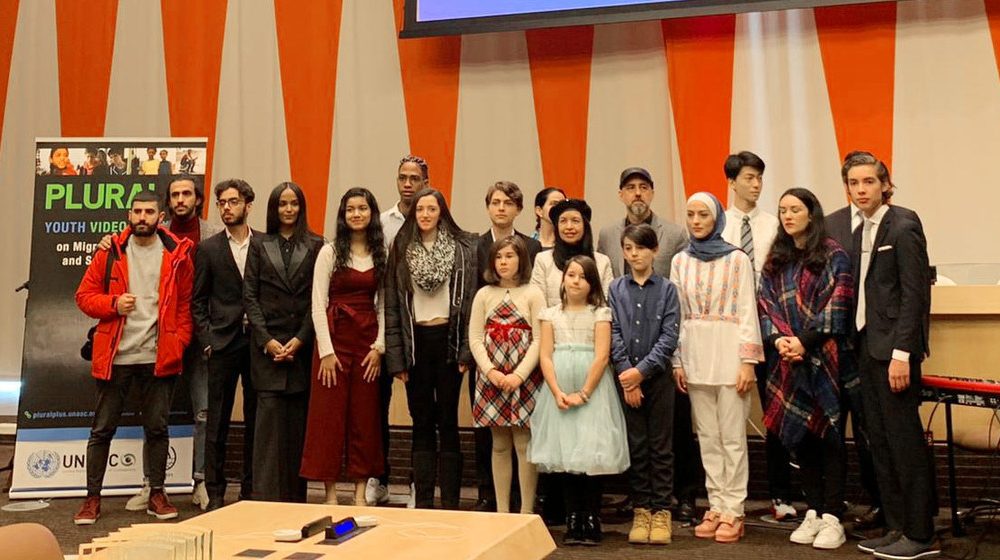 Demonstrating empathy, humor, and intelligence, a group of young film-makers have been recognized for their short videos, which tackle the weighty issues of discrimination, intolerance, and misogyny in a creative and entertaining way, at a ceremony held at UN Headquarters.

The PLURAL+ Youth Video Festival, held on Wednesday, is a joint initiative by the International Organization for Migration (IOM), and UN Alliance of Civilizations (UNAOC) and, which, over the last 11 years, has become an important global platform for youth media, with screenings held around the world.

The top prizes (International Jury Awards) went to the Spanish makers of “Seeking Refuge”, which follows the story of a young refugee girl as she tries to adapt to life in a new country; Mexican video “Tags”, which explores the issues of discrimination and pre-conceived notions; and “We Are Enough: A Message of Girl Empowerment”, made by a young Jordanian director, which examines the expectations placed upon women and girls by society.

‘I am enough: every woman should feel this way’

Faced with a “barrage of discrimination and stereotypes”, Jordanian Lina Abojaradeh decided to send an open letter to society with her powerful video “We Are Enough: A Message of Girl Empowerment”, which won the International Jury Award in the 18-25 category.

Speaking to UN News, Ms. Abojaradeh explained that her work, which examines the expectations placed on women and girls, was inspired by her experience of breaking off an engagement, and the way she was subsequently treated by society: “I realized then that I could not look for acceptance from society or another person, and that this was a message that many women could benefit from”.

Winning the award has given Ms. Abojaradeh more confidence in her abilities and, she says, the drive to continue using art to raise awareness about important issues. Her upcoming plans include a documentary project and a book of poetry.

In “Seeking Refuge”, a young refugee, forced to flee conflict in her home country with her mother and sister, struggles to adapt to her new surroundings in Spain but eventually learns the language, makes friends and begins to enjoy her new life.

The video was made entirely by a group of nine-year-old children, all of them under the age of 12, who were part of a Spanish initiative called “Telekids Workshop”, which helps young people to learn about all stages of the film-making process. The group was represented in New York by Eva Limones MacDonald, who performed several roles behind the camera, including directing the actors.

Her teacher, Jacqueline Sanchez-Carrero, explained that the inspiration for the video came from a book based on true stories of refugee children: “In the workshop, we show children the problems that other children of their age have so that they develop human values. At just nine-years-old, they already have a basic knowledge of media literacy: for now, they want to continue making movies, but we will see what will happen in the future!”

A special award, for the Prevention of Xenophobia, went to the film “Brazilian, But Not Soccer Player”, which takes a comic look at the prejudices faced by people from different cities, countries, and cultures.

The video was made by Patrick Melo, a young Brazilian from the northeast of the country, who now lives in Rio de Janeiro. Patrick told UN News that he made the video after realizing that many others have to deal with a caricatured, stereotyped image of the region: “Some people see the northeast as a joke, and even use it as a synonym for inferior people with little intelligence. This is untrue, and I have been trying to raise awareness of the reality of my region, using humor”.

Patrick, who was invited to the UN along with the other award winners, found the experience enriching: “I met people from very different places, and I realized how much they care about their own culture, just as I love Brazilian culture. I understood the importance of respecting others’ cultures in theory but taking part in the PLURAL + festival taught me to do it in practice”.

The IOM’s Rahma Soliman, one of the organizers of the festival, told UN News that the primary goal of PLURAL+ is to ensure that youth are engaged in the critical topics of migration, social inclusion, and diversity: “Throughout the years, PLURAL+ has not only provided young people with an effective platform to express themselves on crucial migration and diversity issues but also reinforced the belief of IOM and UNAOC that youth are powerful and creative agents of social change.”

For Thibault Chareton from UNAOC, and the co-organizer of the festival, “Brazilian, But Not Soccer Player” was this year’s standout video: “I liked that the video is funny. In today’s context, humor remains a great way to share important messages and to call upon the public’s shared humanity and universal values of tolerance and acceptance”.

In all, 25 filmmakers, from 70 countries, won awards and were given the opportunity to screen their work in front of an audience, which included ambassadors, UN representatives, journalists, and filmmakers.

“The videos are evidence of the resilience of young people”, he said, adding: “These young filmmakers have not allowed the negative narratives of migration – so popularized in contemporary media – to rob them of their empathy.”