United Nations Association of Iran / News / UN General Assembly: Here are the 5 big summits to watch out for
Sep 16 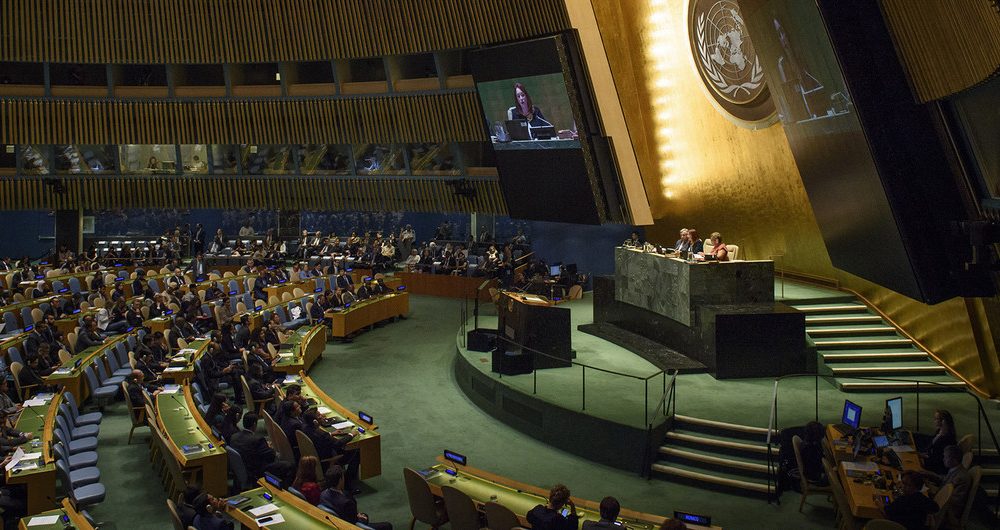 UN General Assembly: Here are the 5 big summits to watch out for

It’s that time again, when the eyes of the world turn to New York, as world leaders fly into the city to take part in the General Debate that marks the opening of the latest session of the UN General Assembly, or UNGA.

Alongside the customary speeches from heads of state, five important high-level summits and meetings will be taking place, covering many of the key issues facing today’s world.

UN chief António Guterres has made the fight against the climate crisis one of his top priorities: by convening the Climate Action Summit, on September 23, Mr. Guterres aims to boost ambition and hold countries to the international commitments they made to cut global warming, as part of the 2015 Paris Agreement.

The Summit will bring together governments, the private sector, civil society, local authorities, and other international organizations to develop ambitious solutions in six areas:

The Secretary-General has challenged leaders to come to the summit with concrete plans, rather than grand speeches, and expects the event to demonstrate massive movements in the economy away from fossil fuels, and towards clean, renewable energy sources: “I want to hear about how we are going to stop the increase in emissions by 2020, and dramatically reduce emissions to reach net-zero emissions by mid-century”.

In recognition of the way that young people are forcing climate action onto the international agenda, a Youth Climate Summit will take place on September 21, as a platform for young activists, innovators, and entrepreneurs, who are driving climate action, to showcase their solutions at UN Headquarters, and meet international decision-makers.

On the same day as the Climate Action Summit, the UN will host the first-ever High-Level Meeting on Universal Health Coverage, with the tagline “Moving Together to Build a Healthier World” which, the UN says, will be the most significant political meeting held on universal health coverage ever.

With at least half of the world’s population lacking access to the essential health services they need, and health costs pushing almost 100 million into extreme poverty each year, the meeting is being billed as the best opportunity to secure political commitment from Heads of State and Government to prioritize and invest in universal health coverage and ensure health for all.

All countries have committed to trying to achieve universal health coverage by 2030, which includes financial risk protection, high-quality health care services, and access to safe, effective, quality and affordable essential medicines and vaccines.

Among these are a commitment to:

Taking place on September 24 and 25, the SDG Summit will be the first of its kind since the Agenda was adopted in 2015, and is a chance to accelerate progress on the 17 Goals and their targets.

The UN has seen progress over the last four years but warns that conflict, climate change, lack of access to essential health services, growing inequalities, and significant financing gaps have limited the impact of global efforts. Those left behind continue to suffer the most, including those in Small Island Developing States (SIDS), least developed countries (LDCs) and landlocked developing countries.

None of the Goals can be achieved without hard cash, but raising enough financing is a major challenge. Rising debt risks and trade-restrictive measures mean that investments critical to the 2030 Agenda remain underfunded.

The High-Level Dialogue on Financing for Development, on September 26, will bring together leaders from government, business, and the financial sector, in a bid to unlock the resources and partnerships needed, and accelerate progress.

It has been estimated that annual investments of around $5 to $7 trillion across all sectors are needed to achieve the SDGs, and the UN Secretary-General is calling for an environment that enables long-term investments in sustainable development, to promote the health and well-being of people, and the planet.

The last of the five summits is the High-Level Midterm Review of the SAMOA Pathway, which takes place five years after an ambitious agreement was reached, to support sustainable development in small island developing states.

These are among the most vulnerable countries in the world, facing a unique set of issues relating to their small size, remoteness, exposure to external economic shocks, and global environmental challenges, including the impacts of climate change.

The review will discuss progress made in combating the devastating impact of climate change, building economic and environmental resilience, and other challenges. These issues will also be featured prominently in the other four summits taking place the same week.

Governments, the private sector, civil society, academia and a wide range of other stakeholders, will be encouraged to launch new partnerships that advance the implementation of priority areas of the SAMOA Pathway, and the Sustainable Development Goals in small island developing states.