United Nations Association of Iran / News / Partnerships with civil society and youth ‘essential’ for a future that leaves no one behind: General Assembly President
Sep 01 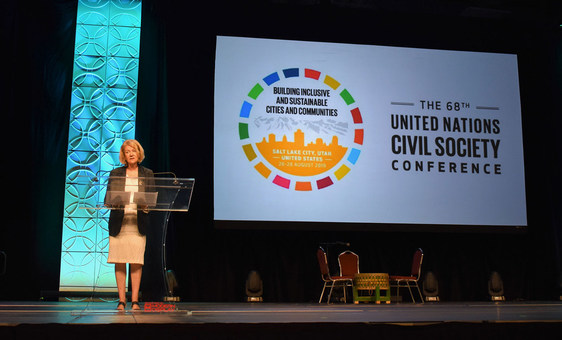 Partnerships with civil society and youth ‘essential’ for a future that leaves no one behind: General Assembly President

Partnerships with civil society and youth are essential to achieving the goals of key UN-backed international agreements, such as the 2030 Agenda for Sustainable Development, and the Paris Agreement on climate change, María Fernanda Espinosa, the President of the United Nations General Assembly, told delegates at the UN Civil Society Conference on Wednesday.

Ms. Espinosa was speaking at the closing session of the event, which took place between 26 and 28 August in Salt Lake City, Utah, at which representatives from civil society and NGOs resolved to actively contribute to their communities to further the 2030 Agenda.

Despite the many improvements made to people’s lives since the creation of the United Nations 74 years ago, too many still endure insecurity, said Ms. Espinosa. Inequality and the negative effects of globalization have led to a reaction against multilateralism, and a rise in racism, xenophobia, and violence.

“Every analysis shows that these challenges will not be addressed if we don’t work together. In our increasingly interdependent world, where shocks in one country can affect the lives and livelihoods of people across the globe, it seems clear that we need more cooperation, not less,” she said.

Ms. Espinosa went on to praise the contribution made by civil society in shaping the work of the UN, stretching right back to its earliest days, from the recognition of the equal rights of women and men, to the progress made on children’s rights, indigenous rights, and on the rights of persons with disabilities.

“I encourage you to continue to engage with your governments to ensure we use these opportunities to put us on the right path and work in your communities on local solutions and initiatives that have the potential to be scaled-up and replicated.”

The Assembly President also urged delegates to take forward the commitments outlined in the Conference outcome document which, she said, reflect a much-needed blend of individual action and responsibility, as well as transformative change at all levels of society.

In the outcome document published on the Conference website, civil society activists underscored the need to understand cities and communities as central to the achievement of all the Sustainable Development Goals (SDGs), and highlighted the importance of inclusivity, peace, family, education, youth, and the empowerment of women and girls.

Although the focus of this year’s Conference was ‘Inclusive Cities and Communities’, the outcome document recognized the interdependence of rural and urban prosperity, as well as the need to address the specific conditions of mountainous areas and small island developing States.

The significance and potential of youth were also recognized in the outcome document, and young people played a major role in this year’s Conference.

The activism of the youth groups present at the event was evident in the closing session, during which a separate outcome document, the Salt Lake City Youth Climate Compact, was adopted.

The youth document contains several action points, from confronting policies that are harming the environment, to educating communities on the impacts of lifestyle choices, and prioritizing environmentally-friendly transport options, such as walking, cycling or public transport.

The Compact declares that, with the world nearing the point of no return, from which life on the planet can recover, it is time for the youth to “unite in action against the climate crisis, harnessing their collective power to construct a future free of the devastation of the climate crisis”.